← Listening to the grass
Waves on the pond →

Thursday Travels: It took my breath away 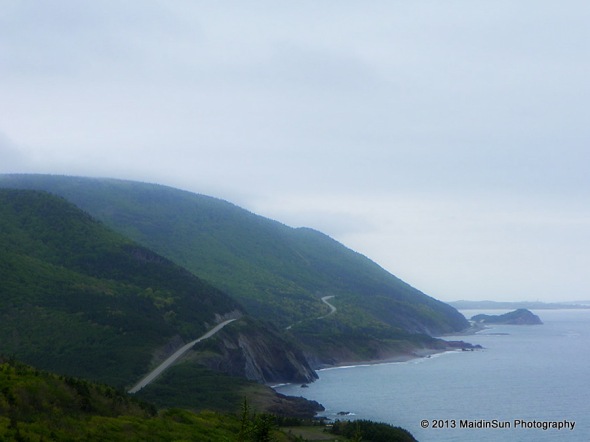 Last week we left off on the Cabot Trail, probably not far from MacKenzie Mountain, trying to get to the cabin before dark.  We needn’t have worried.  We were far enough north and close enough to the Summer Solstice that daylight lasted a good long while. 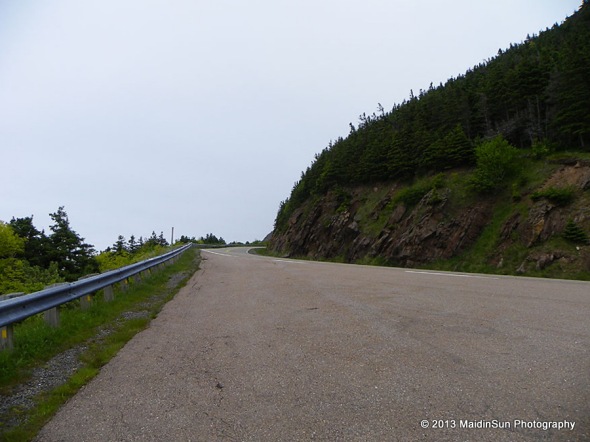 Roads are a record of those who have gone before. 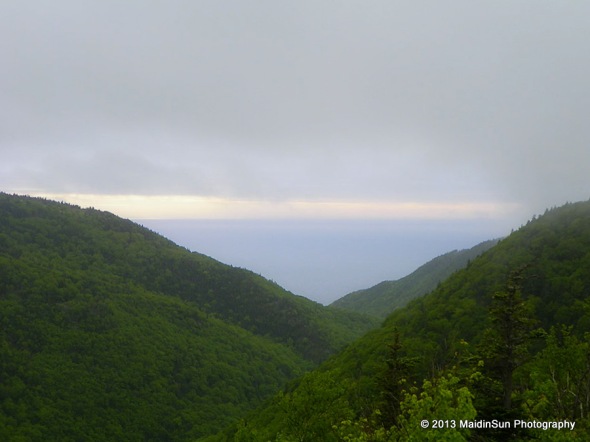 The western side of the Cabot Trail (where we started and where we left off last week) is bordered by the waters of the Gulf of St. Lawrence.  It is on this side of Cape Breton Island that you will find the Acadian (French-speaking) culture.  The eastern (or Atlantic Ocean) side (where we’re headed), is more heavily influenced by its Scottish heritage.

Side note:  The Canadian National Park people that we met along the way — throughout the entire trip — always greeted us in French and English.  Signage was usually in French and English, too.  It made me want to learn French.  I did take French in high school, but somehow managed to pass the course without learning much at all.  I would also like to learn Italian, but that would not have been terribly useful in some of the restaurants and bars we visited on this trip where it seemed like everyone was speaking French. 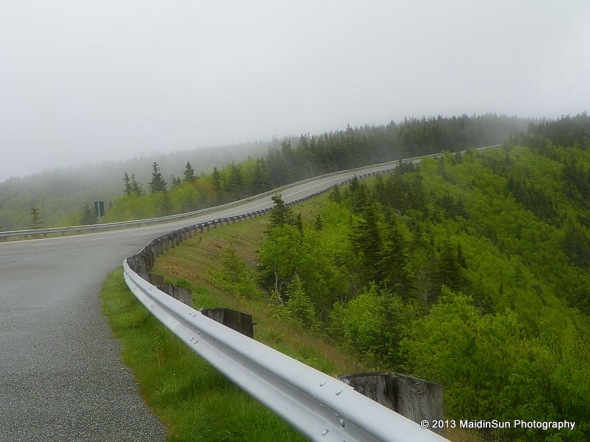 Named one of the best road trips by the Lonely Planet and included in National Geographic’s Drives of a Lifetime series, there is a lot to see and do along the Cabot Trail if you have the time.  Good food,  music, hiking, a real bog (Cape Breton Highland Bogs), whale watch tours, and (of course!) golfing are just some of the features you can find along the way.  I recommend the summer season if you want a wide range of options.  M and I found most things to be closed when we went, and other businesses just getting prepared to open with reduced hours of operation. 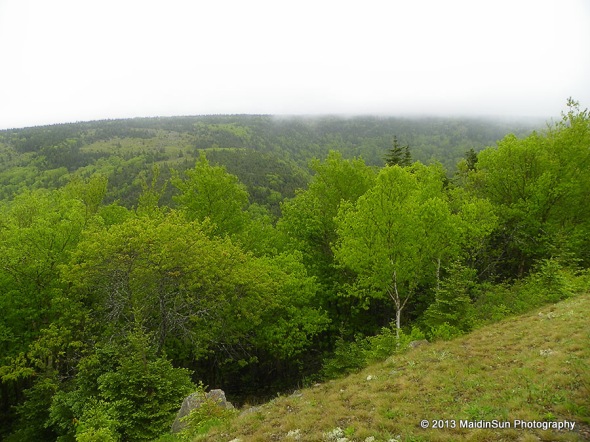 The trail was named after John Cabot (Giovanni Caboto), an Italian explorer who landed on Cape Breton in 1497 while he was working for King Henry VII of England.  The trail as it is today was completed in 1932, linking  previously isolated fishing villages.  There are still some isolated villages to be found on the northernmost section of Cape Breton Island. 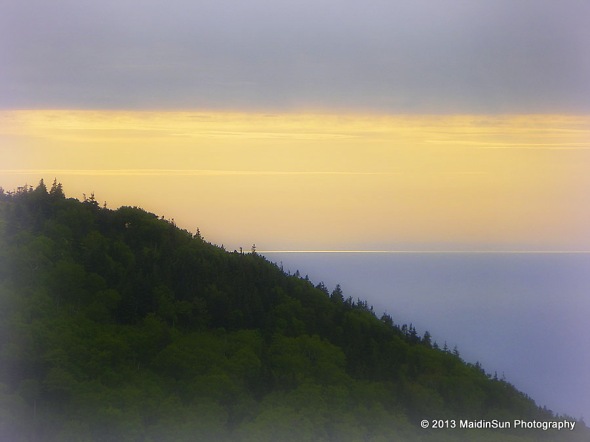 As I mentioned in last week’s post, there was no one else out there with us (that we could see) other than one other car going in the opposite direction early on.  It was an amazing thing, having all that beauty to ourselves. 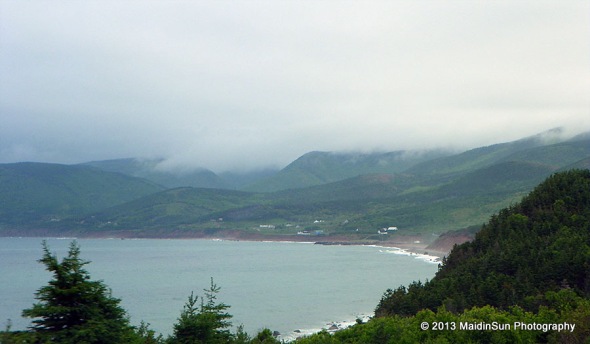 There were a few signs of civilization here and there, such as in Pleasant Bay (just over MacKenzie Mountain).  M and I went back to Pleasant Bay a few days later for some hiking in the area, and to find a place to eat dinner. 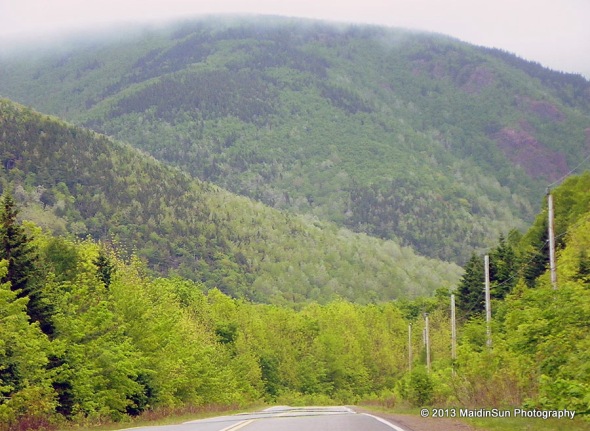 We encountered our first moose on North Mountain. 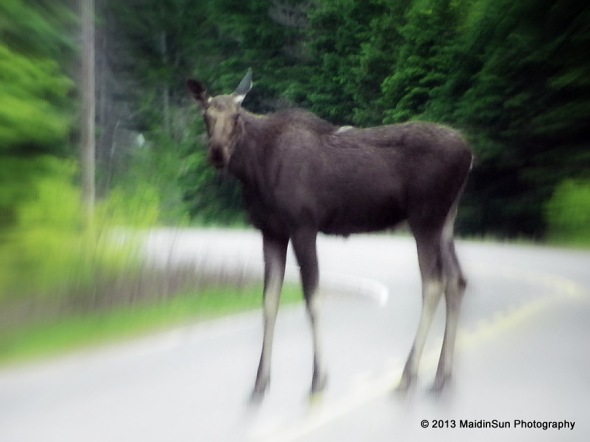 Unfortunately, I did not get one good photo of her.  I would blame it on the camera, but it’s my own fault for not trusting my abilities with the camera.  I put it on an auto setting rather than trusting myself in manual.  This lovely creature with the dainty looking legs stood on the road for the longest time; she was right smack in the middle so that we were unable to continue forward.  I don’t know if you’ve ever seen a moose, but they are HUGE.  They make our deer look like pygmies. 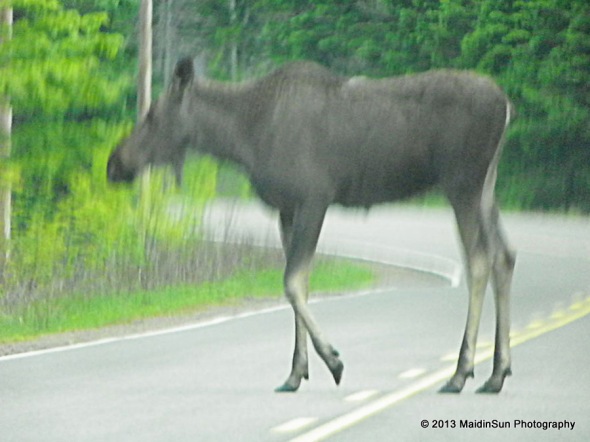 We later found out that it’s typical to be stopped by one or more moose in this area at that particular time of day.  Apparently the locals have their own ways of getting them to move, mostly involving honking the car horn.  We were told that doesn’t always work.  M and I were in no hurry to see her move so we waited and watched as she waited and watched.  Eventually she tired of waiting and watching and moved off the road.  I did have a moment of thinking about getting out of the car to take a photo, but abandoned the idea almost as soon as I had it. 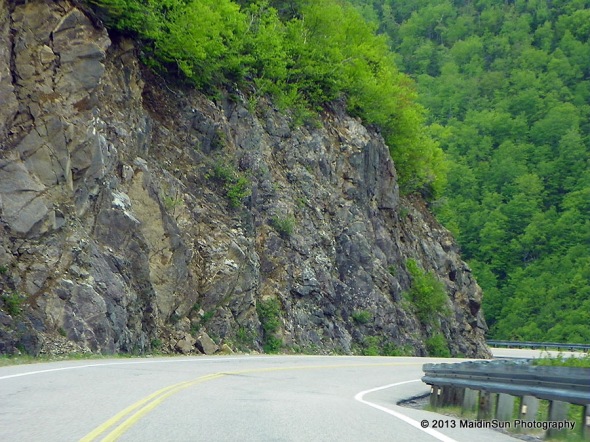 We’re almost at the cabin!

Getting to the cabin we were renting turned out not to be as complicated as it sounded.  We found it with no problem.  The directions we were given were excellent.  We parked at the back of the cabin (which faced the road), and walked around to the front to let ourselves in.  I don’t think we actually went inside of the cabin for a good five minutes or so because this is what we saw when we arrived at the front: 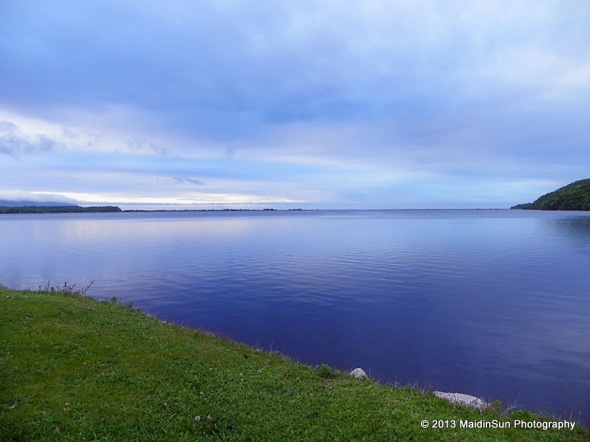 It really did take my breath away.  The view of South Harbor and the Atlantic Ocean beyond is almost-beyond-belief stunning.  I wanted to sell our house in the Bogs and move there immediately.  I still do.

Meanwhile, back in the Bogs

We haven’t started packing for any big moves just yet.  Due to job situations and such, I doubt we’ll be moving anywhere soon.  Unless, of course, we win the lottery.  The odds of that happening are not in our favor. 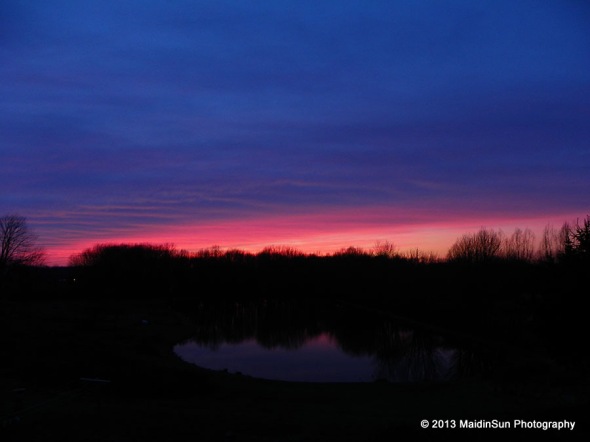 We have our own stunning sights to see here in the Bogs.

That means there’s nothing else to be done other than enjoy and appreciate where I am now.  I think the Bogs heard me thinking about Cape Breton and wanted to show me a thing or two because last night’s sunset was extraordinary. 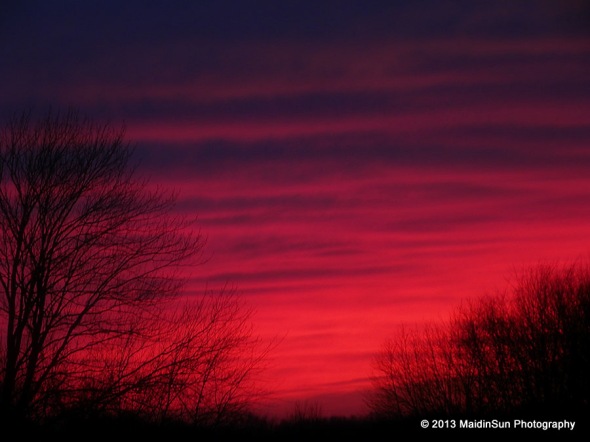 Today, however, is gray again.  If we got any snow at all overnight, it must have been just a few flurries.  There’s no evidence of it today.  The geese stopped by this morning.  I must not have made things clear when I spoke with them yesterday so I went out to parley with them again.  All but one of the group were standing on the shore, watching another goose swimming around the edge of the pond.  The one in the water looked a little odd. 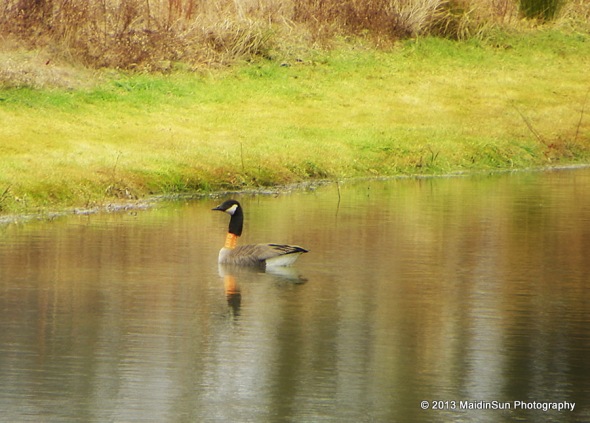 He or she has been banded.  The other geese seem to take this to mean the banded goose is The One in Charge as they all watched and then followed his lead when he decided to take off.  Or her lead.  There’s no way to tell the difference between a male and female Canada Goose without a really up close and personal look. 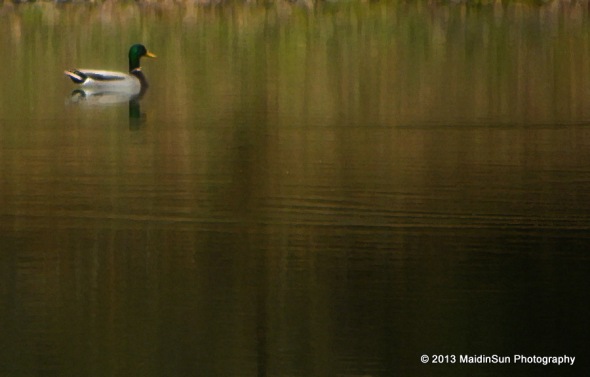 The mallards are permitted to stay and enjoy the pond.

That’s it for this week’s edition of Thursday Travels, and your almost-daily report from the Bogs.  Thank you for joining me on the Cabot Trail, and on the deck here for the sunset.  Wishing you a delightful day, evening, night… whenever and wherever you are on the spectrum of time.  🙂

24 Comments on “Thursday Travels: It took my breath away”

Are you missing the daily walk around the pond and Breezy Acres? Please join me over at Flickr where I am putting together a series called The Daily Walk 2013. I will post one or two (sometimes more) photos each day from my daily walks and bike rides, along with any thoughts that come to mind about the walks or the photos that seem worth sharing.
Loading Comments...
Comment
×
<span>%d</span> bloggers like this: