Perhaps that should be “We Stone” but “We Rock” sounds better and a little less drug-connected.

M and I spent a good portion of our day yesterday digging and shoveling.  We took turns digging out what I think of as The Pit, where the flagstone will eventually find a home.  One of us would dig, loosening the topsoil, and the other person would shovel the loosened dirt and fling it into the wheelbarrow.  As the morning wore on there was less flinging and more straining to lift the shovelful of dirt (on my part, at least).  Under the topsoil there was the usual clay, harder to dig into and heavier to lift.

Once The Pit was dug out and leveled, it was time to shovel in the gravel.  More flinging and lifting ensued.  My exercise schedule had me down for weight training yesterday.  This fit the bill nicely.  It was much more exhausting, something I didn’t think possible given the weight workouts I’ve been subjecting myself to lately.

Before I continue (because this deserves kudos as well as extra credit), I should note that M got up at 6:00am yesterday morning and cooked a gourmet breakfast for us before turning into the Project Patio Boss.  He made a scrumptious spinach and feta frittata, and mashed-potato pancakes using leftover mashed potatoes mixed with a variety of grated veggies that included yellow squash, zucchini, and onions.  There was a good selection of fresh fruit to go with it (raspberries, cantaloupe, and cherries).  Who wouldn’t want to work for a man who delivers that sort of breakfast before starting the job?

When all was said and done with the gravel, we once again had to make sure everything was level.  Then M went over it with the heavy roller (pictured in the bottom right of the photo above).  It took the two of us to get it out of the pit, and then back up the hill towards the barn where it normally resides.  (The roller was left behind in the barn when we bought the house and property.  Lucky us.)

After the tamping (rolling), the fun.  It was time to start putting together the jigsaw puzzle.

I learned that all the weight training of the past few months have paid off.  I can and did help with the lifting of the heavier flagstones.  Neither of us was sure I’d be able to do it.  Our back-up plan was to have our oldest son come up and help.  (Note to Oldest Son if you’re reading:  We still need your help as those stones will have to be moved again.  And again.  Plus there is still the floating dock project.  Don’t forget to get some water shoes!)

The heat began to creep up on us, as did the sun.  We still have a long way to go in figuring out where to lay each piece of this big puzzle.

To the right in the above picture, on top of the brick wall, you’ll see one of the capstones for the wall.  It’s Vermont slate and the color seemed to help tie in the grays and blues in the flagstones (and the flagstones have some of the reds and rust colors that go with the brick).  I think the capstones will be the last part of the project.  Don’t quote me on that as I’m not sure.  There may well be ten other things that have to be done after the capstones are laid on top of the bricks.  I had M set one there so I could look at it since this was my first opportunity to compare and contrast and make sure it fits.

(In the afternoon sun.)

We still haven’t gone through all of the pieces of stone yet.  The stones have a way of getting heavier as time goes on, even the smaller ones.  We finally called it quits around 1:00pm when our arms had had enough of lifting.  We’ll give it another go tomorrow morning, separating the rest of the stones out from the big pile and getting a better idea of shapes and sizes and fit.

After all our hard work yesterday, we decided we had earned a treat so we took a little drive to New Baltimore where you can find some of the best ice cream ever, anywhere. 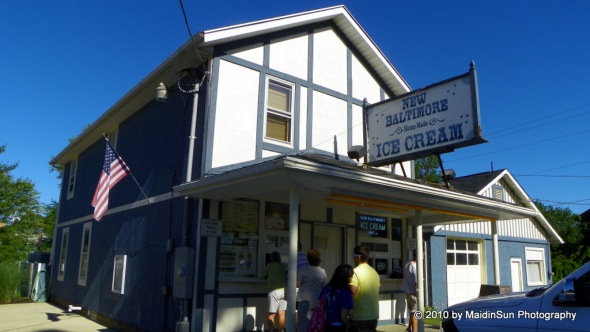 Typically, M and I start and end the ice cream season with a sundae.  It depends on the flavors available during our first and last visits as sometimes there is a flavor that is just too good to pass up.  While there were some good flavors on the board yesterday (butter pecan, for instance), nothing stood out enough for me to go against the sundae tradition so I had a butterscotch sundae (with whipped cream and a cherry on top).  M had a Nuthouse sundae which comes with salted mixed nuts and caramel.

In case the diet police are paying attention, that was our dinner.  Not exactly the usual healthy fare, but everyone deserves a treat every now and then, especially people who spend warm summer days digging and shoveling.  We had a healthier snack of hummus and vegetables later in the evening to balance things out.

I think we’re going to stay in tonight and quietly celebrate the 35th anniversary of the day we met.  We disagree on the date so this will be a half-way point, so to speak.  We met on the 3rd of July in 1975 but I can understand M’s confusion on the issue as I didn’t speak to him that day and I’m sure I blended in with a big crowd of people.  It was on the 4th of July that I said hello.  And asked him out.

We might go for a row around the pond later.  In the meantime, I think I’ll join Izzy in a little catnap. 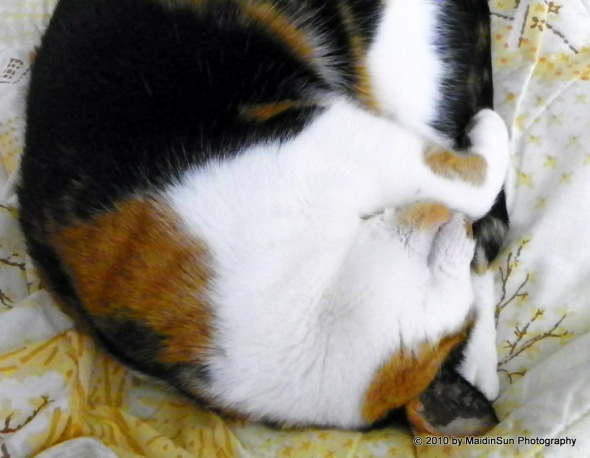 Or go out on the porch with Bella, and read for a little while.  It’s too hot right now to do much else.