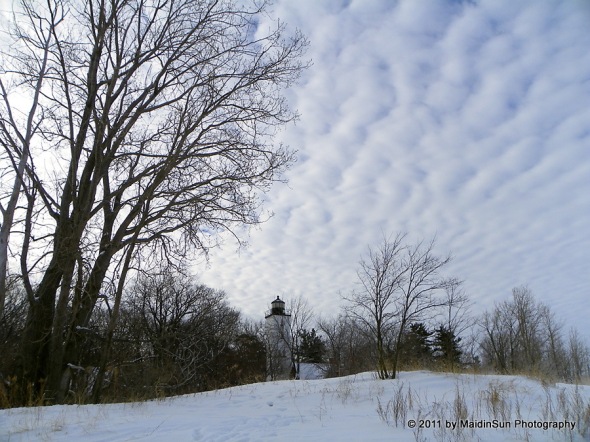 As I was going through the photos from Monday morning’s jaunt around Presque Isle, it occurs to me that the sky was almost perfect.  I like the way the clouds almost match the snow and ice, with hints of blue showing between them.

I had planned to walk over to the lighthouse when we finished on the beach and ice dunes.  I wanted to be closer for some of the photos.  But it was so cold out there.  The wind was harsh and my face was starting to hurt so I ended up making a dash for the warmth of the car instead of getting more pictures.

We left Presque Isle, stopping at one or two more beaches along the way to look at more ice dunes.  Then we made our way to Oil Creek State Park which is about an hour’s drive south of Erie.

The Oil Creek Valley in Pennsylvania is the site of the world’s first commercial oil well.  The state park has a variety of interpretive exhibits where you can learn about the early oil industry, oil boomtowns, oil wells, and transportation.  The park also has a lot of hiking trails some of which, in the winter, are used for cross-country skiing.

M and I had been to Oil Creek State Park several years ago.  We went in the fall to do some hiking.  I think that may have been before I got a digital camera as I can’t locate the photos on my computer.

I did not take photos of the skiing trails since I wasn’t sure what we would encounter along the way.  It’s a good thing I left the camera behind as I had a pretty good spill at the beginning.  Before we’d had a chance to warm up, we were going downhill and around a curve, something I wasn’t ready for so down I went.  It was my one and only fall on this outing.  We did the beginner’s loop first and then gave one of the intermediate trails a try.  All in all, we were out there for about an hour.

When we finished skiing we drove over to one of the park’s railway stations so we could make our way along the tracks to see the ice control dam.  I’ll be back with photos of that (and a miniature version of the Blue Wall) tomorrow.

Another blue-sky day, followed by another gray-sky day

The sun was with us once again yesterday.  It was nice to have two sunny days in a row.  We’ve had a weird combination of snow, sleet, and freezing rain today.  Messy.

(Yesterday’s view of the creek.)

While out walking yesterday I very much wished for a pair of snowshoes.  The trek through the crusty snow, very deep in spots, was difficult and it took me twice as long as usual to walk to the creek and back.

(Sun and shadows in the woods.)

Little things caught my attention yesterday.  A feather sitting on top of the snow:

(Wrapped in a leaf.) 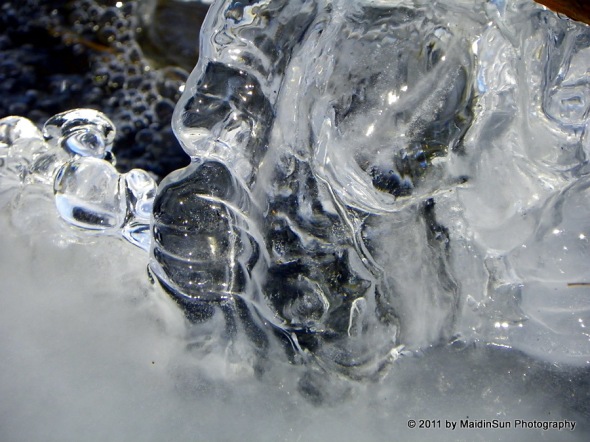 There were also some very cool icicles hanging about on the shed.

I took the camera with me today but didn’t get much in the way of nature shots since I ended up standing under the barn extension for a good deal of the time I was out there.  The snow, sleet, rain mixture was all rain until shortly after I came back inside when it turned to all snow. 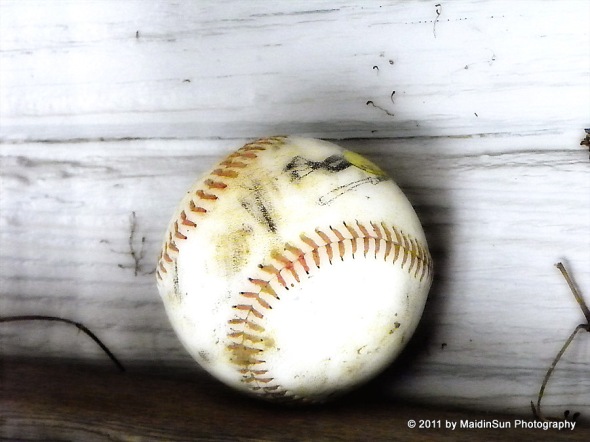 I got tired of watching the gray and the rain so I turned the camera on some of the objects sitting or hanging around under the extension to the barn. 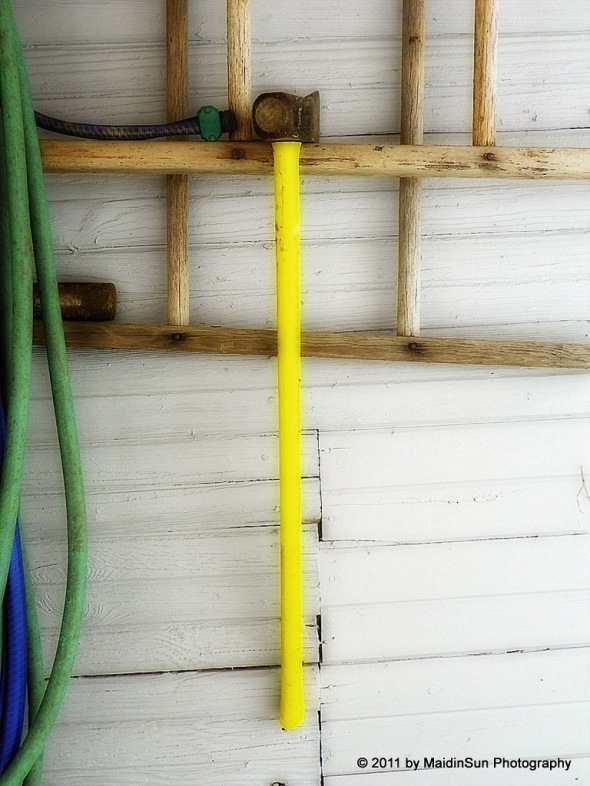 And that, folks, is about it from the Bogs for today.  Thanks for visiting! 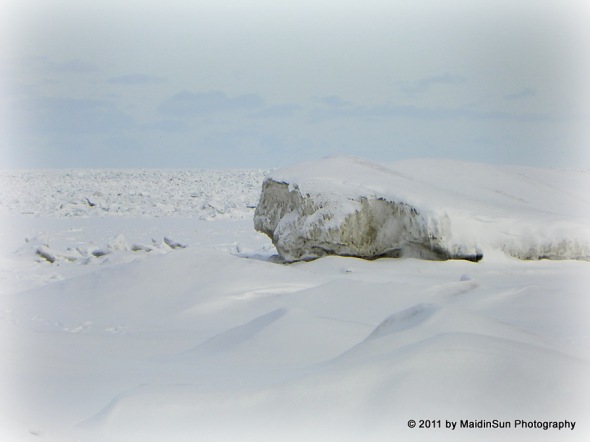 One of the things we haven’t done while living relatively close to Lake Erie is go up and have a good look at the lake during the depths of winter.  Although it would have been closer for us to see the bits of Lake Erie in Ohio near Cleveland, we decided to see it while we were in Erie, Pennsylvania.  We were, after all, already there.  The hotel where we spent Sunday night wasn’t far from the lake at all. 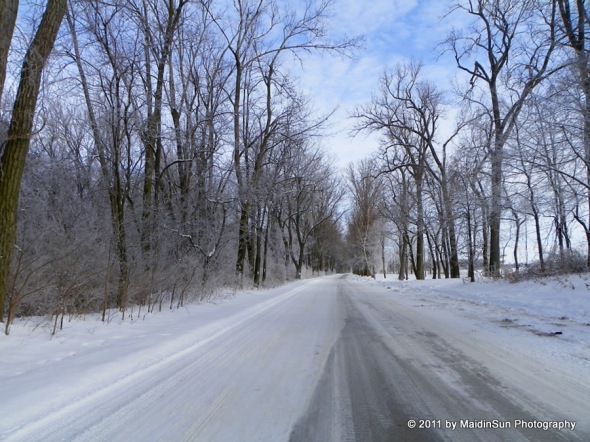 We drove out to Presque Isle State Park the entrance to which was, I think, less than a mile from the hotel.  The parts of the world we could see that morning were icy, and the trees were covered with hoar frost.

Presque Isle is a 3200 acre sandy peninsula that juts out on Lake Erie.  The peninsula/park creates a bay (Presque Isle Bay) on the east side where, in the winter, you might find some folks ice fishing.  We did.

There were several shelters out on the ice.  The one pictured above had someone huddled inside when we arrived.  Although I didn’t walk out to check, I am sure it was bitterly cold out there on the ice. 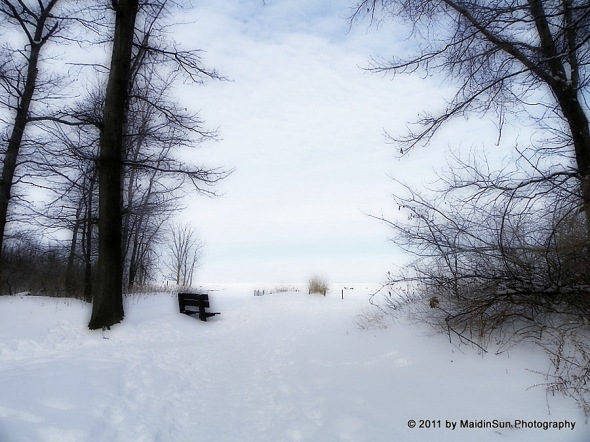 (Approaching the beach and Lake Erie on the west side of Presque Isle.)

We drove to a beach on the west side which was near the Presque Isle Lighthouse since I wanted to see the beach, the lake, and the lighthouse.

And now we get to one of my favorite photos from the trip.  M was, as usual, way ahead of me and already on the beach while I was taking photos of benches and the lighthouse.  As I walked up the hill and passed the bench you see in the photo above, I looked out to see M in the distance…

… standing out in the great expanse of white and blue, the whole scene looking amazingly stark and almost surreal.  It took my breath away.  I have never seen anything like it.  (Click on the photo to see the slightly larger version.  You’ll see a little more detail that way.  The same is true of all the pics.) 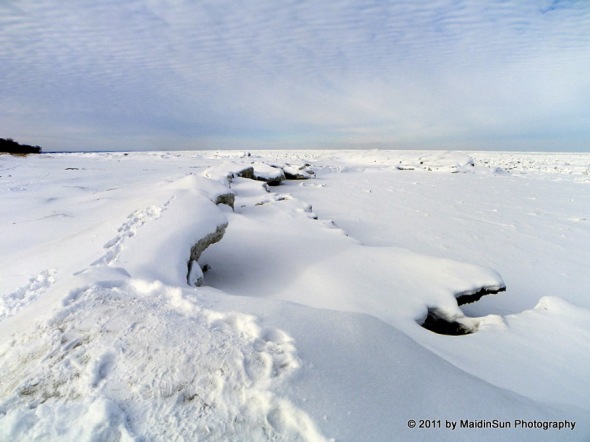 I walked up and joined him in looking out over the mostly frozen lake.  There was, I think, a channel out a ways that was not frozen (or not quite frozen) as it was dark blue in color and stood out from the rest of the whites and light blues.

The line of dark blue in the photo above is the channel I mentioned.  It wasn’t until after we left our vantage point and the beach that we saw the signs warning us not to stand or walk on the ice dunes.  Ice dunes are formed in shallow water when the waves combine with the ice and snow.  They form in layers and are built up by wave spray while there are still waves to spray.  As you can see from the photo captioned Ice dunes, they look like waves formed in the opposite direction of the waves you would see on the lake when it isn’t frozen.  The ice dunes are important in that they help prevent beach erosion during the winter months.

They are also not meant to be walked upon.  They can be riddled with thin spots, caves, and air pockets, weaknesses in the ice where you could fall through the dune and into the freezing water below.  For the sake of the photos I took, it’s good I didn’t know that at the time.  For the sake of my life/health, I should not have been standing there.

The calm after the storm

It is clear and sunny in the Bogs today.  Don’t let that fool you.  It is also bitterly cold.  Make sure you bundle up when you go out there.

Here is 30 seconds of yesterday’s wind, sleet, and snow.  The video isn’t nearly as impressive as the real thing.  Notice the way the snow is blowing (sideways and sometimes even upwards).

But you get the idea (and if you experienced it, you don’t need the video).

The blue of the sky was incredible. 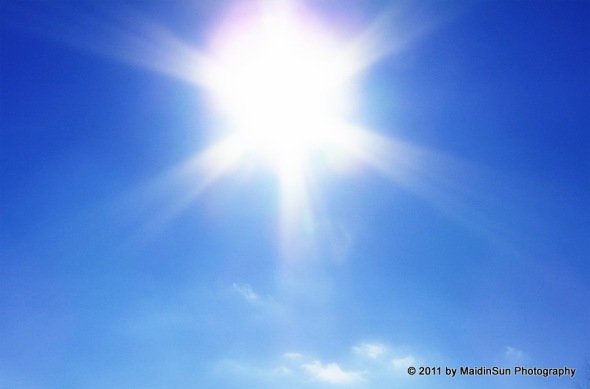 The trek was, well, a trek.  There are so many layers out there that walking, for some reason I can’t explain, feels labored and difficult.  Every now and then I would stay on top of the layers and it was easy.  But mostly I would sink in through the layers of snow, sleet, ice, sleet, ice, and snow, and each step out of it felt like it required more effort than usual. 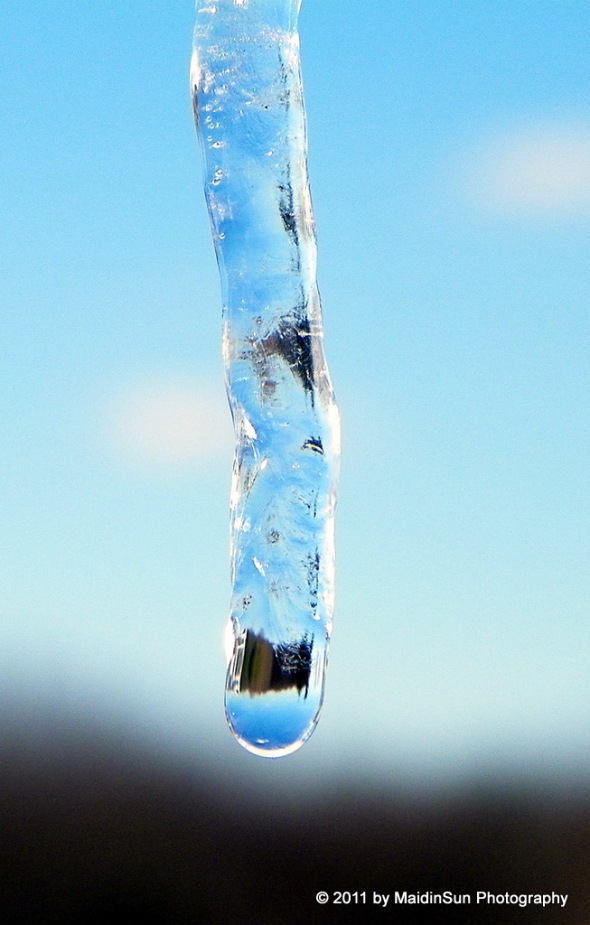 I didn’t wander far from the house.  Just far enough to feed the birds and watch the icicles melting in the sunlight.  I tried to capture the glitter of the snow in the sunlight, but that kind of beauty is beyond my camera.  All of the colors of the rainbow were represented, shining brilliantly on the surface of the snow/ice mixture.  I wish I could show it to you.

Come when the rains
Have glazed the snow and clothed the trees with ice,
While the slant sun of February pours
Into the bowers a flood of light. Approach!
The encrusted surface shall upbear thy steps
And the broad arching portals of the grove
Welcome thy entering.