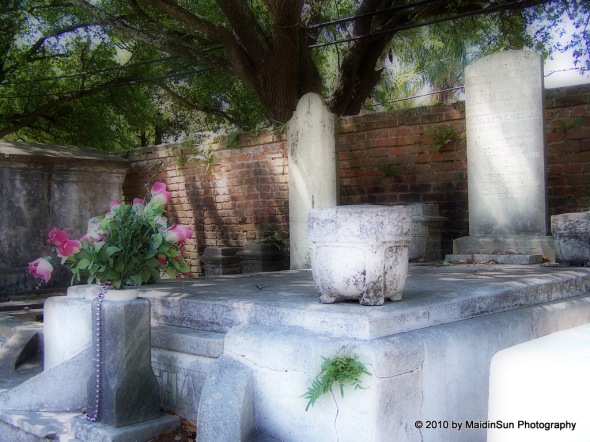 I don’t know about you all but…  I’ve had enough of cemeteries and death for now.  As much as I like cemeteries (and I do), I have been reminded all too often of late that they are associated with much more than peace, good landscaping, and sculptures.  Two of M’s colleagues at work have died within the past few weeks.  Another visitation (wake) is on the schedule for this afternoon.

I had planned on ending the series today anyhow.  I learned a little more about post-processing by having fun in Photoshop with the Lafayette Cemetery No. 1 photos.  That’s a good thing.  But enough is enough.

So let’s leave the angels to sleep…

… and say goodbye (for now) to the cemetery series with a New Orleans-style gift:

In the category of “M & I do the strangest things”

Last night M and I went back to Barberton, scene of the Mum Fest (see this post for more about the Mum Fest).  What drew us back there was this: 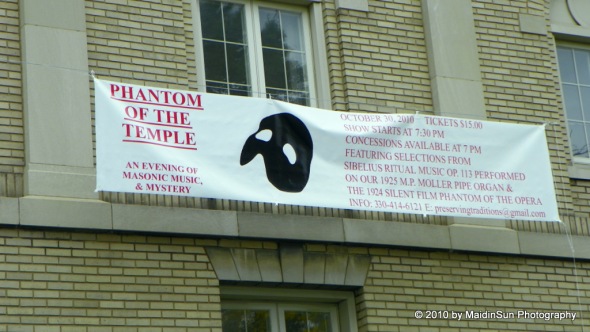 I was willing to go because I like silent films.  M might claim the silent film had something to do with why he wanted to go.  He might also claim that his interest in pipe organs is what really drew him to this event.  (For more on that, see this post.)  But I think he just wanted to see the inside of a Masonic Temple.  And if I’m being honest, so did I.

I don’t know much about the Masons.  Nothing, really.  My grandfather was a Mason.  My grandmother belonged to the Eastern Star.  None of that meant anything to me since it was all hush-hush.  I suppose if my parents or someone from my generation had joined or whatever it is you do to become part of the Masons, I might know more about it.

The Barberton Masonic Lodge was designed in 1924 by Harpster & Bliss Architects, a firm that designed many prominent homes and buildings in Akron around the turn of the century.  The pipe organ in the Barberton Masonic Lodge was built by the M. P. Moller Pipe Organ Company of Hagerstown, Maryland, and installed in the temple in 1925.  At the time of installation, it was valued at over $17,000.00.

(An opening in the cloud cover.)

Last night’s Phantom of the Temple:  An Evening of Masonic Music and Mystery was interesting.  We were allowed into the inner sanctum to listen to music, see a little (very little) Masonic ritual, and to watch some of The Phantom of the Opera (1924 silent film starring Lon Chaney).  This was part of a series that the Barberton Masonic Temple is havng to raise money for the preservation and restoration of the building and/or pipe organ.

There is some beautiful wood work inside the Barberton Masonic Temple.  I wish we could have explored more of the building. 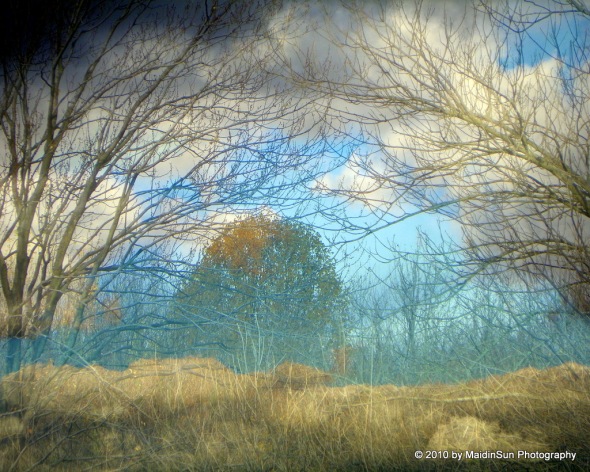 (A collage/multiple exposure of “In the tree tops” and “An opening in the cloud cover.”)

I enjoyed some of the music.  The Masonic Ritual music was a bit heavy handed for me, but probably typical of ritual music.  I found Andante for a cylinder in a small organ, KV 616 (a Mozart tune) cute at first and then annoying.  Every time I thought it was going to end, it went on.  And on.  And on.  I very much liked the Bach piece (Prelude and Fugue in G, BWV 550).  The organist, Ms. Nicole Keller, was very good.

They did not show the entire movie but instead went to the last part which ran about 20 minutes or so.  I’m not sure why they did it that way other than to have time to feature the other music without it running too late.  While we were by no means the youngest in the small crowd of about 100 or so people, the majority were quite a bit older than us.

Clouds, sun, clouds, hints of blue sky, clouds, wind, hints of sun, dark clouds, light clouds, roosters crowing, cows mooing, gunshots in the distance (either target practice or someone hunting — I’m not sure which), grasses swaying and rustling in the meadow, trees creaking in the woods, the occasional bird quietly flying by, ripples and reflections on the pond…  That pretty well sums it up.

I am still taking pleasure in my daily outdoor adventures but wonder if it isn’t becoming boring for my visitors to the blog.  How about it?  Are you bored yet?