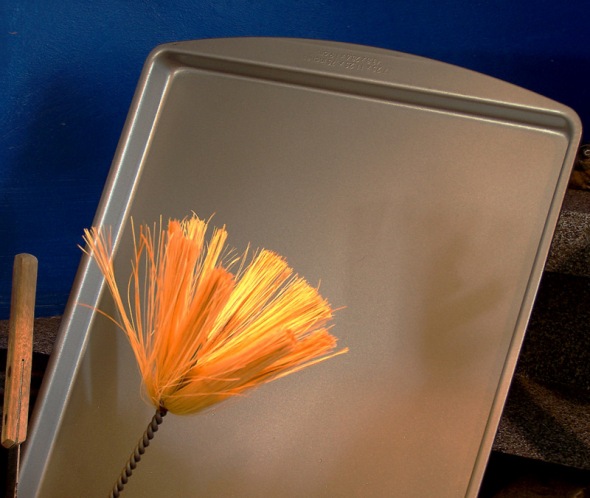 That’s how I sound right now.  Well, worse than that in that really gross stuff is being coughed up and out so there’s a nasty liquid quality to it all.  Add in the snorts and sniffs dealing with the sinus congestion and it’s not attractive at all.  That said, I slept well again last night and the congestion is loose and moving, an improvement over what seemed like a situation calling for dynamite to clear it out.

Yesterday M and I went out to the Blessed Mound of Consumerism (the mall area) where M was measured for a tux for the wedding and where I went to the secondhand sports store and purchased one 20-lb. dumbbell.  Yes, one.  I figure at almost $1.00 per pound, one will be enough for a month or so.  I’m not likely to be lifting two of those suckers anytime soon anyhow.  I can barely manage a few bicep curls with it, proof that I’m right about this.  I can buy its mate when I’m ready to be hefting two at the same time.

I also purchased a step.  I had to go to The Big Department Sports Store for that.  They had a grand total of three steps in the store, one of which was part of some complete workout system As Seen On TV and the cost was more than I was willing to shell out.  Fortunately, they also had two packages with just the step and an intro to step aerobics DVD (also As Seen On TV).  It wasn’t until I was standing in line that my memory kicked in and I realized the step is part of Cathe Friedrich’s workout program, the same Cathe Friedrich responsible for a workout DVD I recently ordered after reading a review written by a friend who recently gave it a try (“Cathe Friedrich’s Hardcore Series:  Muscle Max DVD & FREE Resistance Band).

Funny, ha.  I guess I didn’t watch enough infomercials during my middle-of-the-night television viewing over the past two weeks.  (Actually, I watched the Outer Limits and World News Now when I wasn’t reading.  For those not in the know, I was up for a few hours every night during the worst of this cold, unable to sleep due to the cough, sore throat, and stuffiness.)  Until my friend mentioned the Muscle Max DVD, I’d never heard of Cathe Friedrich, much less seen her on TV.

I watched the intro DVD last night so I’d be ready to give it a try today.  While watching it I had a feeling, deep down where it counts, that I was going to be an uncoordinated mess when it comes to step aerobics.  It’s good to know that my gut instincts are still spot on.

This morning I flailed around for a grand total of 12 minutes.  The sweat was pouring off me and I didn’t use the risers for the step.  My feet were cramping and my legs were yelling at me.  12 minutes!!!  I knew, deep down where it counts, that I was cheating myself when it comes to cardio.  It should be noted as well that those 12 minutes were actually the first six minutes twice.  Yes, I had to repeat the first six minutes.  I couldn’t get the steps coordinated the first time around.  When I got to the point where I was standing there staring at the television suddenly unable to control or figure out which direction my limbs were supposed to be moving in, I stopped the DVD, hit rewind, and started over.   In fact,  and I’m not sure this is even possible, but I think my limbs were trying to walk and/or flail themselves away in four opposite directions just to get away from what the nut in charge of the body was subjecting them to.

I’ll probably be doing that same 6-minute loop for a few days before I can move on to the next couple of minutes.  The workout, so sayeth Cathe, is designed to be done three times per week.  I think it will be a few weeks before I can make it through the entire 30 minutes so it won’t hurt for me to practice every day until I get the hang of moving my arms and legs while I step up and down, maintain my balance, avoid injury, try not to trip over my own feet or kill — be killed by tripping over? — whichever cat has decided to camp next to the step and watch me make a fool of myself.  I’ve long suspected that I’m a great source of entertainment for the kitties.  Now I’m sure of it.

Shoes may be a factor here, too.  Cross-training or step aerobics shoes are recommended because, the instructor says, running shoes don’t have the correct kind of support.  She may be right.  Although I can attribute some of the foot cramping to the way I position my feet when I’m learning new steps (I curl them up into claws, as if that will keep me from falling down), the shape of my running shoes may also be a factor since they’re designed for a different foot movement.  I’m going to search my closet.  I may well have a pair of almost unworn cross-training shoes from when I tried aerobics in the past and gave up due to my lack of coordination.  I don’t want to have to buy new shoes right now since I just paid a ridiculous amount of money for new off-trail running shoes.  Plus that step wasn’t cheap-cheap ($50 for the step and two sets of risers, plus the “free” DVD).

The step workout, short as it was, warmed me up for the treadmill where I did a 2.22 mile walk/run in 40 minutes (5 minutes warm-up and 5 minutes cool-down).  The step itself can be justified in that it will multitask, becoming a weight bench (that I can even put on an incline) when I do weight training.

Today’s photo is courtesy of the way the light was hitting the clean dishes in the dish drain.  I tried several different settings, including messing around in manual mode.  I need to start taking notes when I do that because I forget which is which and the next time I try something similar I have to go through the entire learning process all over again.