(An August 2006 view of the wildflower meadow.)

Karma, in one of her comments on my blog, asked if I had any photos of the wildflower meadow when it was in full bloom.  I couldn’t find anything from the spring months.  Perhaps because I was new to digital photography (and not yet addicted enough to be snapping hundreds of photos every day), perhaps because the flowers tend to be more sporadic in the spring so I took a few close-up shots but no wider or longer views of the meadow itself.

September of 2006 seems to have been a great time for the wildflowers.  Not just those in the meadow, either.  I have a file of photos all taken on the same day (September 29) from one of my walks around the pond.  There were flowers blooming everywhere.  Some, like the coneflowers, were finished for the season, but others were bursting out in bloom all over the place, including the jewelweed, something I didn’t see as much of this year. 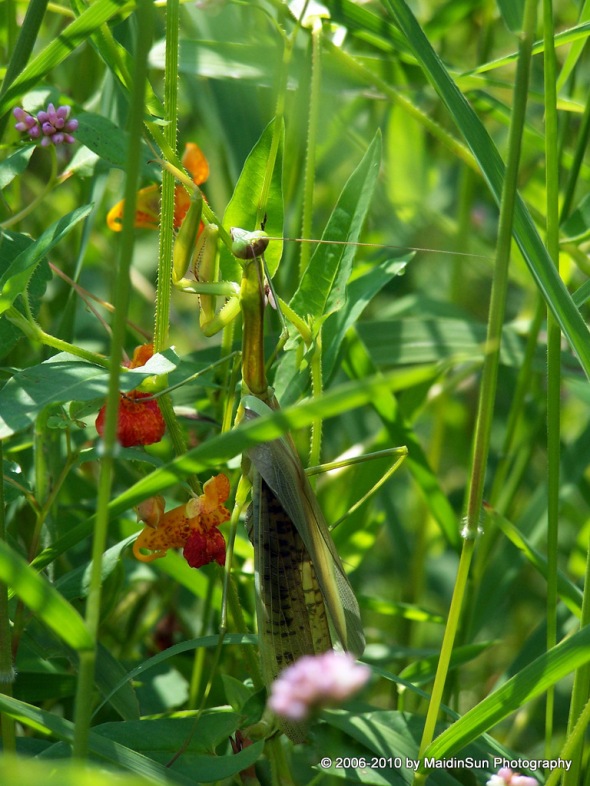 (Praying mantis hiding in the jewelweed.)

There seem to have been plenty of monarchs flitting about as well.  I have a large collection of photos of them.

(Monarch in the asters.)

It was interesting going back and having a look at photos from four years ago.  It is hard to believe that much time has passed since I got my first digital camera.  I don’t think my photography has changed much, though.  Even back then I was trying to do that impressionism thing:

Although it almost hurts to look at that one (lol!) because of the blurriness, I do like the colors.  What is odd is how the camera focused on one plant over to the far right.

(A view of the pond from above the wildflower meadow.)

Karma also asked (when I left a comment at her place which, by the way, have you visited yet?  You should.  Go now.  I’ll wait…) about pictures of baby killdeers.  I had mentioned that we usually have a family of them nesting on our property and that I always enjoy watching the babies.  I thought I had several pictures of the group of them from this past spring but could only find this one:

They were living in the garden, near the asparagus bed.  It was a good spot to pick, for the most part, because the garden is fenced in yet roomy enough to walk the babies around.  The only problem with nesting in the garden was that the night before I took this photo M and I were out in the garden picking asparagus by flashlight (I can’t remember why we decided to do some night gardening) and I almost stepped on the babies who were all huddled together, no doubt scared after having this giant stomp through their nesting area.  I had no idea they were out there as I hadn’t seen them during the day.

I went back the next morning and took a few photos.  Most of them must have been blurry or otherwise deemed “no good” as this was all I could find.  I had a brief period of ruthlessness a few months back and went on a delete spree that cleared out a lot of photos that I’m sure would have done nothing more than languish and take up space.  I need to do that again.  Soon.

Thank you, Karma, for giving me the incentive to go back and have another look.  It was fun and I think I may have learned a thing or two about myself while I was at it.

M and I went to Akron yesterday to meet up with friends and have — judging by how I feel today — a little too much fun.  I’m pretty sure it was the Carrot Cake Martini at the Barley House that did me in.  It was delicious but I should know better than to mix it up, especially by bringing something sweet into the mix.  That said, it was a good dessert drink.

I think it would have helped if I’d ordered something more substantial than a salad for dinner.  I had the “Hearts of Plenty” salad.  I should have taken a picture as it was a pretty salad with the artichoke hearts, hearts of palm, beets, and corn arranged nicely on top of the salad greens.

After parting with our friends and moving to the Barley House for dinner, we hung out for a little while, watching the Cav’s game.  On the way home I played around with the camera, capturing a few abstract type things. 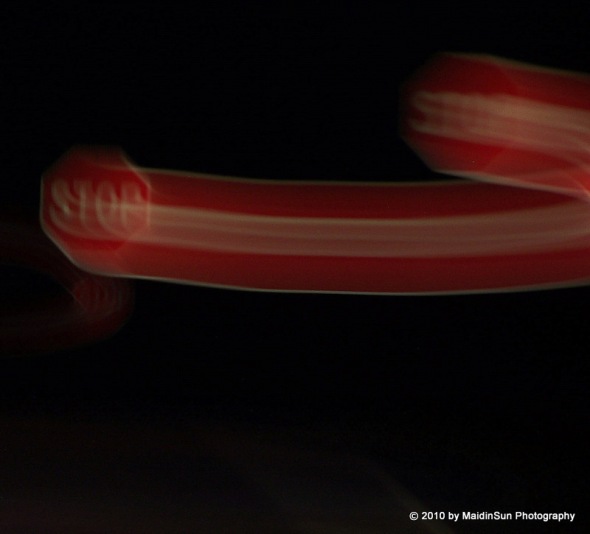 When we arrived home it occurred to me that I’d forgotten to harvest the asparagus so M and I walked out to the garden to pick it.  I would have left it until today but an overnight freeze was predicted and that would have ruined the spears that were ready for picking.  As I approached the garden a killdeer flew by, landing in the wildflower meadow where I thought she had a nest.  Turns out the nest was in the garden.  There were four babies huddled around one of the asparagus plants.  I’m glad I wasn’t harvesting by moonlight.  M found the babies with the flashlight while looking around for asparagus spears that might be ready to pick.

We got a photo of one this morning.  They are so cute.  Our first spring here we had a family of killdeers living in what was to become the wildflower meadow and it was entertaining to watch the babies following the parents around.  The garden is a good place for the babies since it’s fenced in and might keep the other animals away from them. 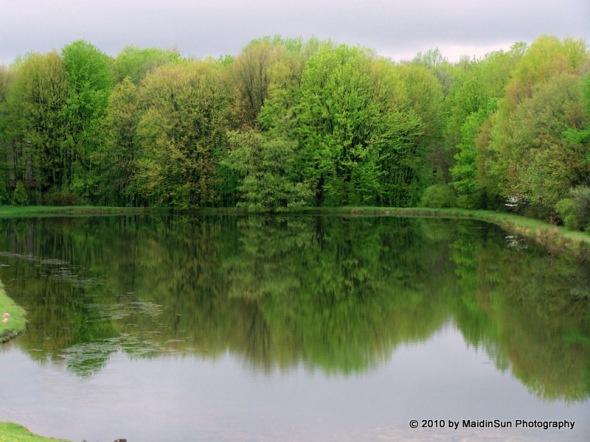 (Monday’s view of the pond.)

The much-needed rain finally moved through.  It’s cool and breezy today but expected to warm up into the 70’s over the next few days.  Nice.

(A springtime shot of the flamingos.)

As you can see above, the dandelions are doing quite well this year. 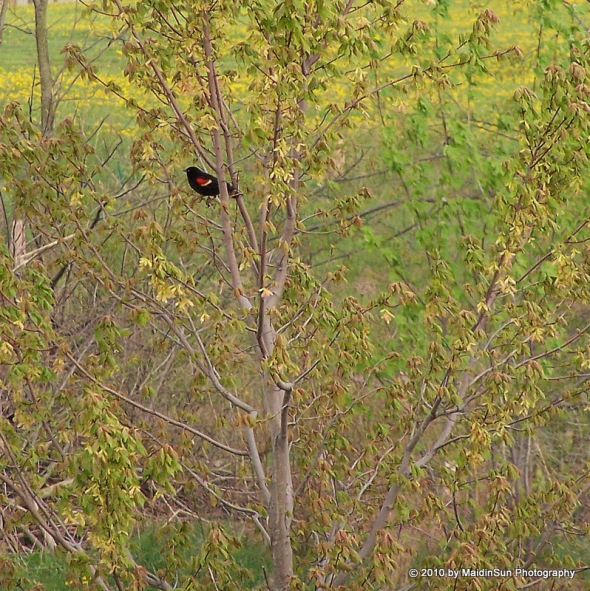 Well, the garden chores and housework await.  I should get to it so I can spend a little time lazing around on the porch later today.