172: Scenes along the Intracoastal Waterway

Alternate title for this post is:  How the other half lives 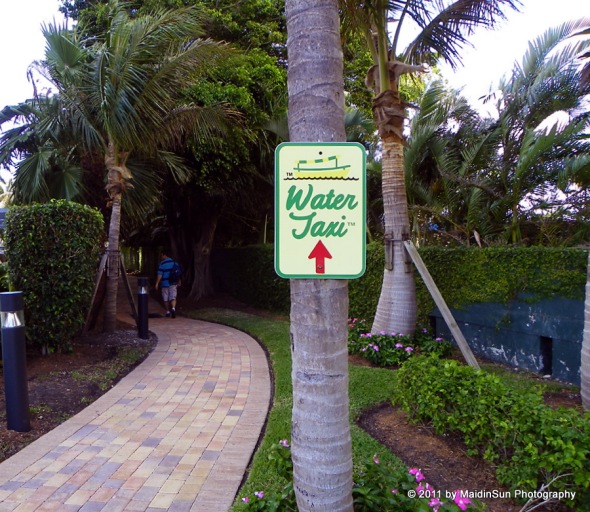 The walk to where we caught the Water Taxi was about 2-1/2 miles from where we were staying.  Instead of walking there, we decided to catch the Pelican Hopper, a free shuttle service provided by Lauderdale By The Sea.  The bus runs until about 5pm so we knew we’d be walking back later that evening.  The driver dropped us off at Stop 1A when we told him we were taking the Water Taxi.  From there we walked down to Shooter’s where we had lunch, and caught the Water Taxi from there.

The food at Shooter’s, by the way, has always been consistently good.  We ate there twice last year so we knew we’d find something good on the menu and were unlikely to be disappointed.  Plus you can sit outside by the water and watch the yachts go by.

We did not see any manatees.  I was hoping we might, but I’m not sure what time of year they’re more likely to be seen in that area. 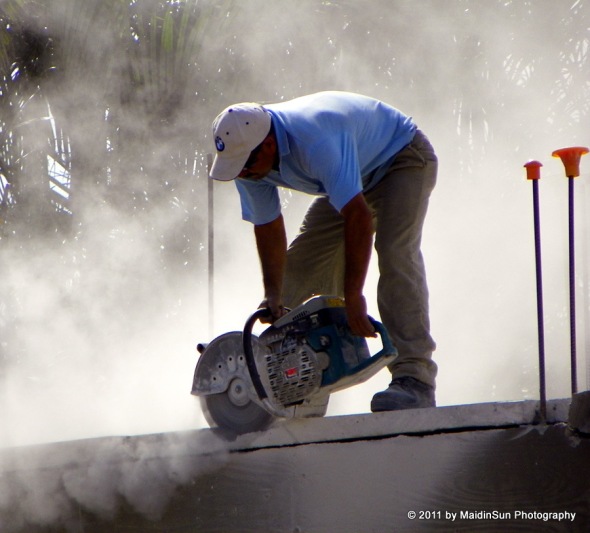 We did see a lot of folks working, mostly gardeners and a few construction workers.  Although the housing boom (we were told) is over in Florida, there are still a few new McMansions going up along the waterway and rivers, some owned by foreclosure lawyers who have benefited greatly by the mortgage fiasco of the past few years.

Along with mega houses, the very rich also have yachts, sailboats, and plenty of interesting sculptures.  This one in particular caught my eye.  I’m not sure but it looks like it might be holding a camera. 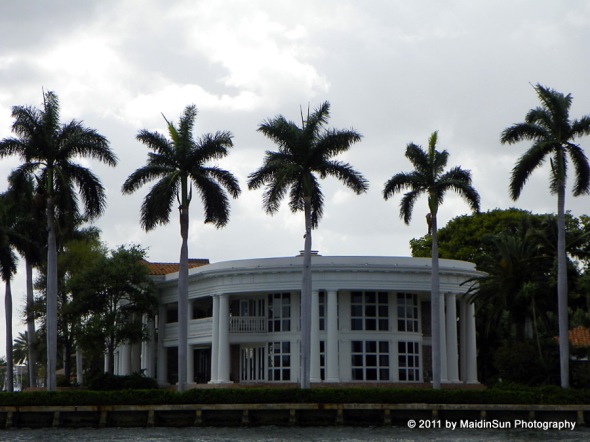 "The White House of the Intracoastal Waterway"

The guides on the water taxis are very knowledgeable and entertaining, making the trip more than just a ride on the water.  We learned about some of the people who own the homes and yachts that are worth millions (and millions!).  There are a few celebrity owners, and some of the older homes were once owned by celebrities such as Burt Reynolds, Dinah Shore, Nick Nolte, and there is a little gray home once lived in by Vivien Leigh (of Gone With the Wind fame).  I liked the “old Florida” homes best.  They are a lot smaller than what people are building now.  Many of the old ones get torn down and replaced with a McMansion.

Yacht rumored to be Steven Speilberg's but rumors were not confirmed

I’m not a big fan of celebrity home tours or celebrity watching (couldn’t care less, really), but the guides did make it fun and interesting.  Our guide on the way back was particular funny, sometimes in a snarky sort of way.  I can appreciate good snark.

The clouds moved in...

We took our water taxi ride on Friday while the wind was still blowing and gusting.  Near the coast, the wind was pretty bad, but on the waterway it didn’t seem nearly as gusty. 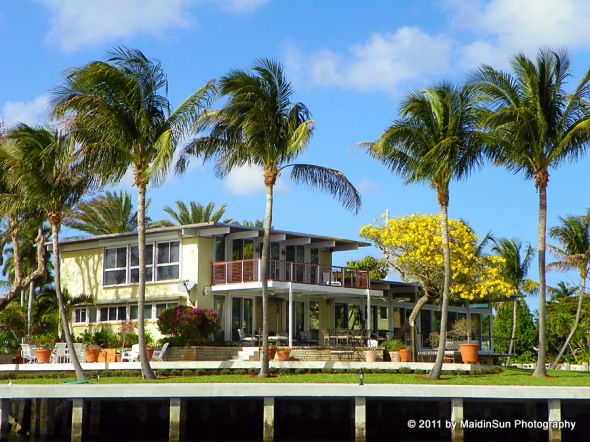 The colors and landscaping were beautiful.

I played with the above photo and the next one in Photoshop, just for fun and giggles.

Later this week, when I have the time and have gone through more of the photos, I’ll bring you a few more scenes from along the waterway as well as part of Old Fort Lauderdale.

The sun has been shining down upon us here in the Bogs today.  It’s still a bit chilly (high of 37 degrees today), but the sun makes it feel so much warmer.  I actually went out and about without a hat or gloves.

The crocuses are really taking off now.  The little purple guys are spreading their joy all over the flower bed and beyond. 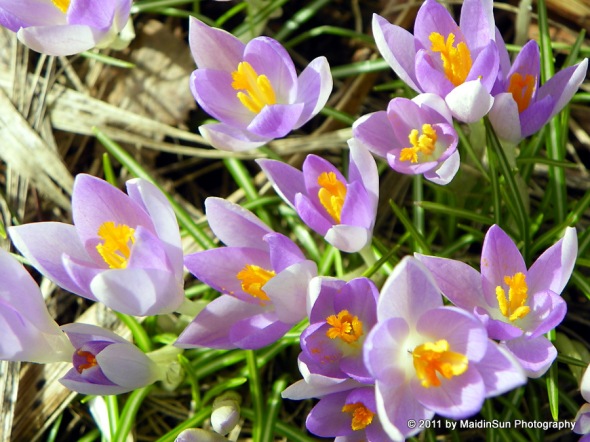 The tulips are looking good too.  If we don’t get a prolonged hard freeze over the next few weeks, there ought to be a riot of color out there when the bulbs all come into bloom.

I found a way into the woods and down to the creek that didn’t involve slipping and sliding in the mud.  Even so, there is plenty of slippery stuff to be found once down there. 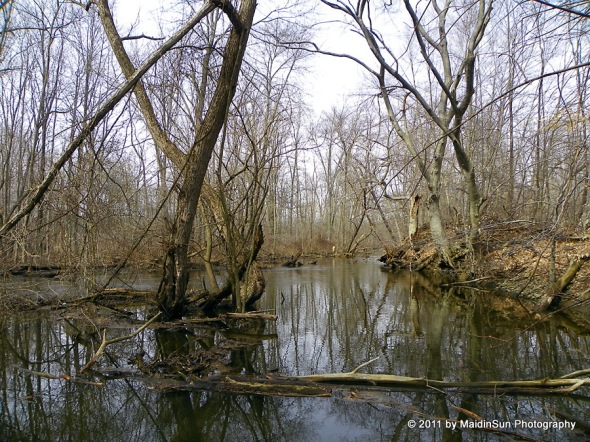 I was surprised by how high and how fast the creek is running.  Water continues to drain into it from the pond and the various little streams that run down to it.  We’re expecting more rain tomorrow and Wednesday so I doubt it will be going down anytime soon. 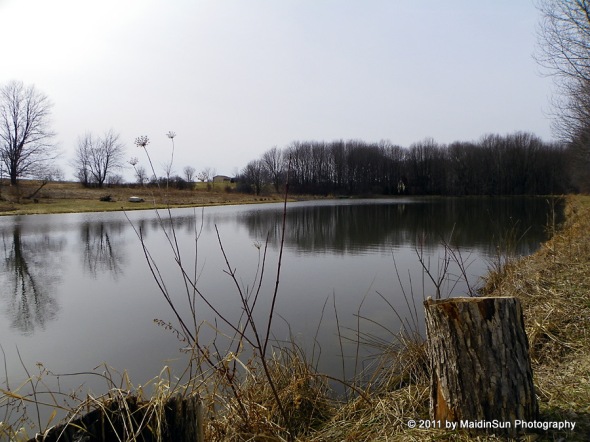 Today's view of the pond

The pond is waking up.  I noticed when I was walking down there from the house that there were ripples appearing, a sure sign that the fish are becoming active.  I did see some tiny fish along the shoreline, but nothing more than a splash or a ripple from the bigger fish.  They tend to stay out of sight.

Floating near the shore

There are also all kinds of insects out and about.  The birds must be having a feast.  I saw a bluebird, his blues brilliant in the sunlight.  A red-winged blackbird stopped by the feeder.  And (I almost forgot!) I saw a great blue heron at the pond for the first time this season.

Things are starting to get pretty exciting out there.  🙂

(Have a seat and watch the sun come up.)

Greetings from Lauderdale By The Sea!  I know I posted the same greeting yesterday, but that was an auto-post composed at home in the Bogs.  Today I’m posting from Florida.  Yay!

We arrived late yesterday afternoon after relatively smooth flights.  I was particularly impressed with how well the pilots handled the landing in Fort Lauderdale where there were sustained winds of 25 mph.  Good job, guys!

It was warm (near 80), sunny, and incredibly windy. After surviving two flights to get here (in spite of my body’s attempts to kill me with panic attacks), I realized it was the cab ride from the airport to our hotel that I should have worried about.  Our driver must be new at his job as well as fairly new to this country as he barely spoke English.  He didn’t seem to know where he was going.  We provided him with Mapquest directions.  Instead of just reading them and then driving, he started driving, directions in one hand, cell phone in the other.  At one point he was driving, looking at our directions, and talking on the cell phone.  He went south instead of north.  We got him turned around and finally he decided to follow the directions M was giving him.  There were a few hairy moments when the driver tried to weave in and out of some traffic, but we arrived alive.

The wind continued to bluster and blow all night, rattling doors and windows, and throwing a few of the pool chairs into the pool.  What is odd about this wind is that it’s the kind of wind I associate with storms or an approaching hurricane, but shortly after sunrise the clouds cleared out and it was sunny with a lovely clear blue sky.  It’s been blowing at about 22 mph today, with stronger gusts that just about knock you over. 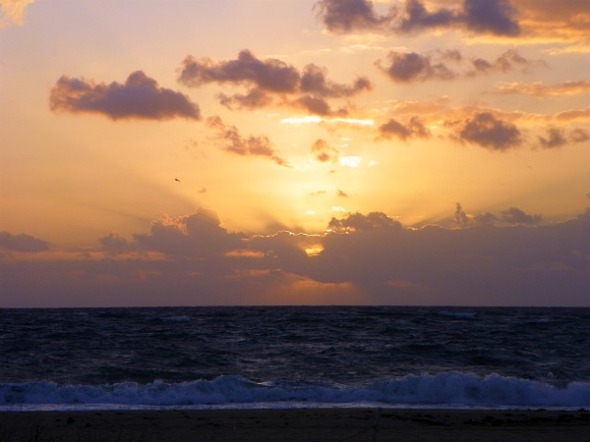 I got up early to watch the sunrise, something I love doing when we’re at the beach on the east coast.  I processed the photos through Picnik, mostly so I could resize them and save them to the computer as WordPress was giving me grief when I tried to post the photos using my Flickr account.  I don’t feel like spending all day trying to figure it out.  It might have had something to do with the hack attack.  Or not.  Who knows? 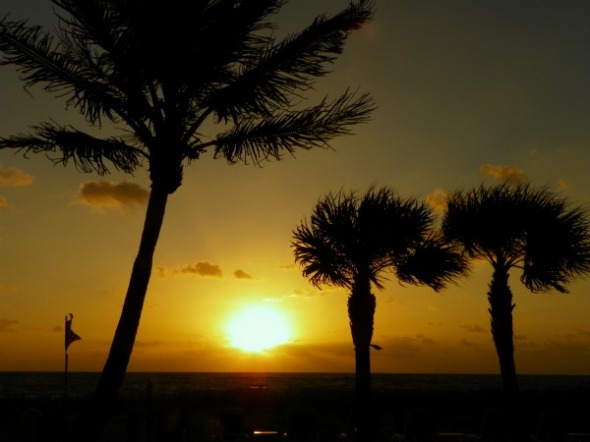 Whatever the case, I can’t see them well on the laptop so I have no idea how good or bad they might be, but they give you a general idea of how lovely it was this morning.

M and I have taken a few walks on the beach since arriving here yesterday.  I forgot how difficult it is to walk the beaches here.  It’s a little like trudging through the snow, only warmer.  Even the sand near the water, which is typically hard packed on most other beaches I’ve visited, is soft and you sink in with each step.  It’s a great workout.

We went swimming (in the pool — the ocean is much too rough, with riptides, choppy water, and jellyfish galore) this morning and then spent the afternoon on a 3-hour tour of the Intracoastal Waterway (for more on the Intracoastal Waterway, see my post from last year).  We got on the Pelican Hopper, a free shuttle bus that runs around Lauderdale By The Sea, and took that to Shooters, a bar/restaurant on the Waterway where we had lunch and then hopped on a water taxi. 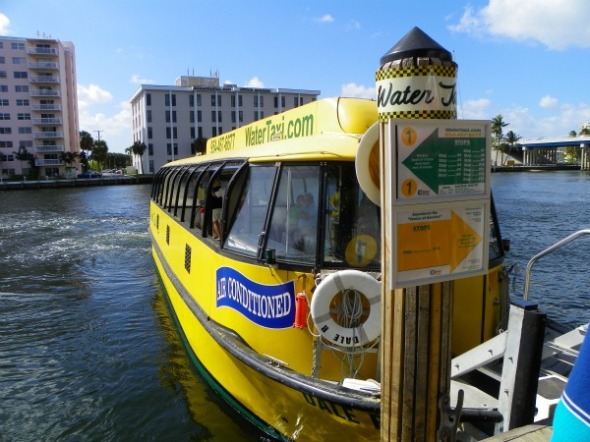 I would love to tell you all about it, but I’m exhausted and want to get this post published.  Hopefully I’ll find some time tomorrow.  If not, once I go through the photos at home, I’ll go back and fill in the details.

Even with the ferocious wind, it’s been a great day filled with lots of sunshine, warm temps, and fresh air.  We spent more time outdoors than in.  Meeting my outdoor commitment here will be a piece of cake.