A touch of warmth 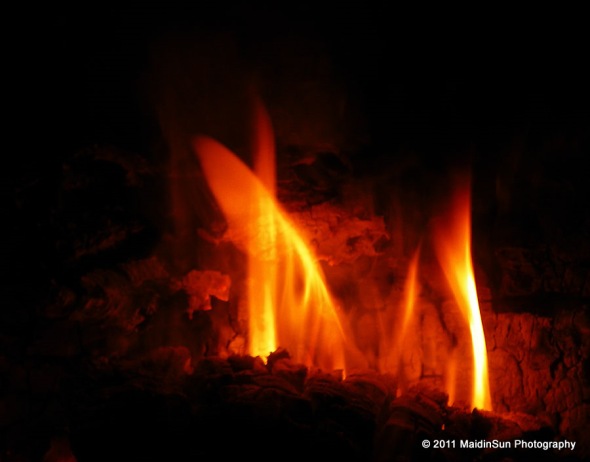 END_OF_DOCUMENT_TOKEN_TO_BE_REPLACED

There are many kinds of heat in our lives, and many forms of burning.  Wood burns; propane burns; coal burns.  The star at the center of our solar system burns, as does the core of the earth we live on.  Our own bodies burn calories of energy in order to maintain their healthy existence.  Sometimes we burn with fever or anger.  When we consider it appropriate, we burn incense as an offering of purification.  And after we die, in many cases our bodies are cremated.

The air here in the Bogs has turned damp and chilly.  We haven’t rev’d up the furnace yet, but there has some been discussion about it.  What we did do instead is have our first fire of the season.  Or fires (plural) as we had both fireplaces going last night.

(Reminder:  You can click on the photos to see the larger versions.)

Although I am one of those people who is generally on the warm side (being very good at generating my own heat), the dampness, once it seeps in, makes it difficult to stay warm.  The fires provided just the right amount of heat for us as we relaxed last evening.

The bonfire pile has gotten a good soaking from all the rain so it may be a while before we have our annual bonfire.  I was checking through my old photos to get an idea of when we normally have it.  Turns out it’s usually November.  I imagine the right conditions are in place by then.  It has to be dry enough that the wood will burn, but not so dry that we’ll set the grass and trees on fire.  We have the bonfire down by the pond which would limit the spread of the fire but you never know how quickly or how far a hot spark, picked up by the wind, will travel.

(Burning bush after this morning’s rain.)

Fire is the element of the inner flame of self-esteem.  It is the inner element that enables you to choose your path, to evoke visions of your desires.  It is the inner force that gives you the strength of body, the courage of mind, and the faith of spirit with which you may achieve your goals.

It’s day 11 of my outdoor commitment.  Motivation was a little hard to come by after looking out the window at the gray skies and wet landscape.  It still felt pretty warm and toasty inside.  Why go out into the cold and damp? 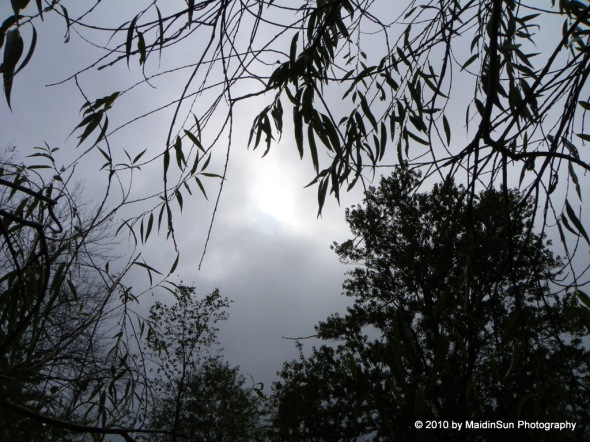 (The light behind the clouds, or today’s view of the sun.)

I thought, with fire on the brain, that I would be seeking out the reds and oranges while out on my walk.  There was some of that. 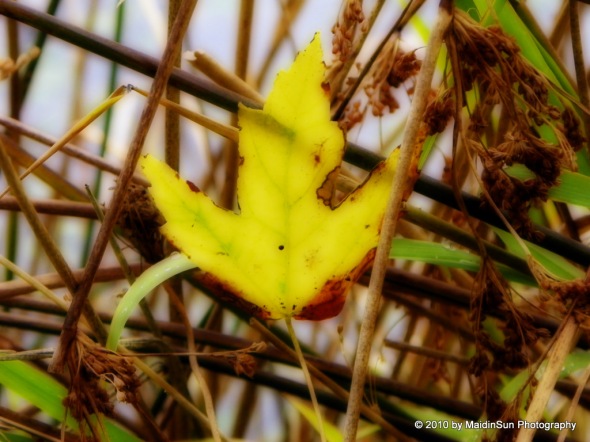 (Leaf on fire with yellow.)

But my eyes were drawn more toward things that were black or brown, looking almost charred. 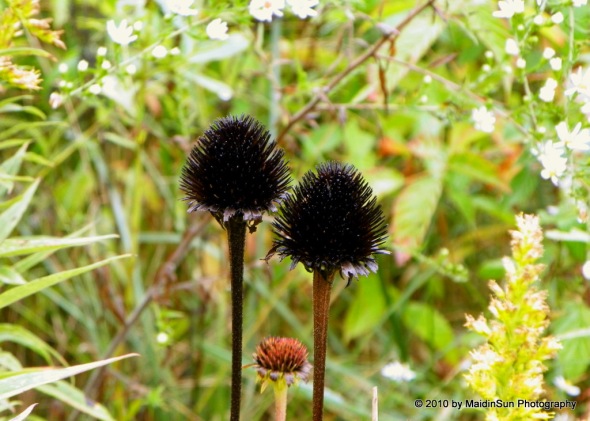 M went out for a walk around the same time.  We walked together for a little while and then separated where one path leads up and over to the woods and the other goes down by the pond.  Since I had been in the woods yesterday, I took the pond route that goes through the middle of one of the meadows and then down.  We didn’t discuss taking separate paths.  We just did it.  We met up again a little later as our paths crossed and then continued on our separate ways. 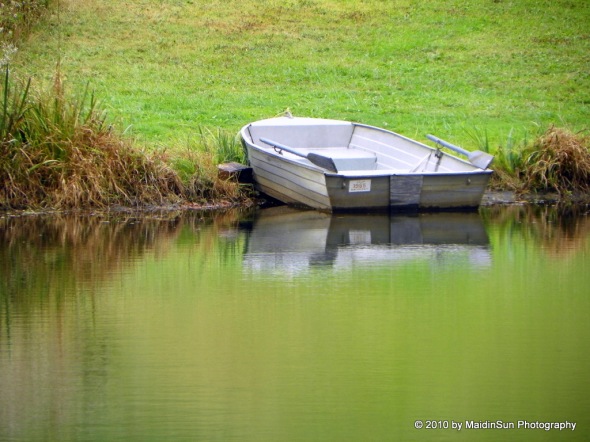 It’s nice to have a relationship that doesn’t require us to be joined at the hip, where we can go off on our own occasionally and then come back together again.

One of the results of all the rain is that the grass is turning green again.  It was brown for most of the months of August and September.  It’s odd that just as everything else is browning and dying off, the grass has suddenly come back to life.

This time of year is so busy for us that it is tough keeping up.  It’s especially difficult to do when we spend the weekend in a cabin in the woods and in the mountains where there is no cell phone coverage, no television reception, and no internet service.  It was wonderful and felt great to be disconnected for a little while.  One of the things I liked about the disconnect was not knowing about weather watches and warnings, in particular a tornado watch.  Without the information, we watched the rain and lightning and listened to the thunder and wind without panic or worry.  Life, for me, is better that way.  If I’m destined to die in a tornado or other weather-related event, I think I’d rather not know about it.  Instead, let me enjoy the moments leading up to it, including the show that the storm brings with it.

For those wondering about Saturday’s blog post, I scheduled it before we left.  That’s one of the beauties of WordPress.

Before I start rambling about our weekend trip, I want to say a big THANK YOU to Cismonok, aka The Pickle Lady, for pickling all those cucumbers.  Everything looks great and I was happy to see that there were no vampires anywhere near the kitchen garbage.

For those inquiring minds that might want to know what that message is all about (and it obviously isn’t too private):  The Gherkin Gods spoke on Thursday afternoon.  I got a call from Hilgert’s that they had 2/3 (or possibly more) of a bushel of small cucumbers picked just for me and The Pickle Lady.  The Pickle Lady makes some fabuloso pickles with those little cukes and I wanted to learn how she does it so we got together and ordered a couple of pecks.  Apparently the small cukes are a pain to pick (or maybe to sell).  The good folks at Hilgert’s were willing to do this for us.  A big THANK YOU to them as well.

This past weekend was not a particularly good weekend for The Pickle Lady or for me but we have no choice other than to accommodate the demands of the Gherkin Gods.  While in the midst of getting the house and self ready for a road trip and a meet-up with old friends, the call came in and I ended up spending a good five hours or so cleaning those little buggers.  I didn’t realize the clean-up of small cucumbers would be so, well, cumbersome.

My friend The Pickle Lady came by after we left and processed the cukes and we now have (split between us in an uneven manner) over 20 quarts of pickles.  She said the pickling and canning process is easier than the cleaning process.  I’ll have to take her word for it.  But I’m happy it’s done and that the Weather Gods didn’t decide to knock out the power before the pickling could be done.  Storms moved through after we left and sometime during the pickling process.

As soon as I feel up to posing those beautiful jars of pickles, I’ll post a photo.  In a surprising move for me, I didn’t take any photos of all the little gherkins when I had them floating in water, either to be washed or on ice while waiting to be pickled.  That’s a good indication of how rushed I was feeling at the time.  Usually the camera goes everywhere and records everything.  The cucumbers were a beautiful shade of green sitting in their bucket of ice water after all the washing was completed.  They would have made a pretty picture.  You’ll have to take my word for it.

(Through a rainy windshield on the way home today.)

The weekend was great fun and I want to tell you all about it but it’s getting late, I’m tired, and something must be done about dinner soon.  We haven’t eaten since breakfast so we’re both pretty hungry.

I will tell you that the weekend was hot and steamy, weatherwise.  It was also great fun.  If all goes well tomorrow, I’ll tell you all about it.  Or partly about it.  It might require more than one post.

In addition to no phone, no ‘net, and no TV, there was also no air conditioning.  I’m afraid I didn’t feel as at peace with that lack of technology as I did with the rest.  This past weekend brought a pretty brutal heatwave to the northeastern part of the U.S. and it was hot, humid, and physically miserable when you’re without a means of cooling off.  It’s all about the mindset, though.  We were with good friends and having a good time so the wilting in the heat and humidity was merely a small part of the big and better package.

Except for the first photo (which was the first photo I took on our trip), I’m working backwards by giving you some pictures taken today, on our way home.  The heavy rains that we encountered are, I think, part of a front that is going to give us some slightly (80’s) cooler and drier weather.

Side note:  I did a quick check at weather.com just now and instead of looking at what’s currently going on and what’s to come, I found myself clicking on “Tonight’s Beauty Forecast.”  WTH???  Beauty Forecast???  Are we that ridiculously vain that we need a special forecast?  For those that are, you should know that tonight’s check list includes lip balm (because it isn’t humid enough?), UV protection (in case moonlight is too much for you), and a light jacket.  I would not need the light jacket.  Tonight’s low of 60 degrees sounds heavenly after a weekend of not being able to cool off because the humidity was so high that sweat does not evaporate.  I suppose that statement explains my lacks of enthusiasm for the Beauty Forecast.   Comfort is more important to me than whether or not I need lip balm.

(Traveling through the storm)

There is also a Frizz Alert (frizz likely), but you’ll be happy to know dry skin is unlikely.  I’m guessing (but could be wrong) that the folks who think we NEED a Beauty Forecast think we’re too stupid too figure out that high humidity equals frizzy/curly hair and moist skin.

(Trying to see the road through the heavy rain)

That was a heck of digression.  It was my first visit to TWC since they went into their new (Beta) version.  I will explore more later, when I can devote a whole blog post to the subject.  Maybe in the winter.  I’ll have more time then since I won’t be dealing with frizz alerts and the possibility of oily skin due to high heat and humidity.  More likely it will be static alerts (when the hair goes straight, stands up and crackles) and extreme dry skin problems due to lack of humidity.

(Fungi –What happens to dry skin in high humidity)

I’m getting silly now, a sure sign that I need to move away from the computer, sit out on the back porch or deck, and watch the sun as it makes its way below the tree line.

I’ll leave you with something pretty that I found along the way on our trip. 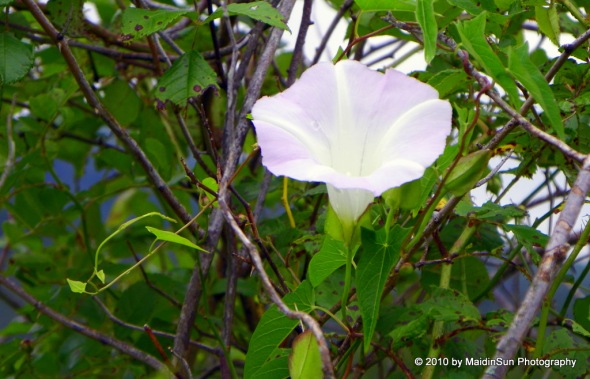