A foggy start to the day

The day started out foggy and gray with the occasional blue patch of sky showing between the holes in the clouds and fog.  I had planned to go back to the Garden of the Gods to get a photo of Pikes Peak through the Siamese Twins rock formation but it was a no go.  Pikes Peak was shrouded in clouds and fog.

Instead we went to Red Rock Canyon (part of the Colorado Springs Open Space) for an early morning hike.  It was earlier than expected because our plans to sleep in were thwarted by an alarm going off at 6:00am.  It turned out to be the ice machine which was located across the hall from us, not the smoke alarm we thought it might be.

Red Rock Canyon is, in my opinion, almost as good as (and maybe better in some ways) the Garden of the Gods.  It is less touristy yet still seems to get plenty of visitors on the weekends and I suspect many of them are locals.  Having gone on a Monday morning, we practically had the place to ourselves.

The fog, as fog tends to do, added an element of peacefulness to the morning.  It also kept the temperature fairly cool which was nice for hiking.  We made our way to the quarry which is near the center of Red Rock Canyon.  It was a moderate hike with a slight climb up stairs cut into the rock at the quarry.

The problem with being a visitor is the limited time we have to explore.  We had to check out of our hotel by 11:00am and that meant we were unable to wander around for as long as we would have liked.  I am rather glad the weather didn’t work out as planned because it gave us the time to visit an area we might have skipped due to time constraints.

There were plenty of wildflowers in bloom with the sunflowers dominating.  They lined most of the trails and sometimes ran right down the middle.

As I mentioned earlier, the blue sky would peer through the clouds every now and then.  We’ve had quite a bit of rain on this trip.  The local people we’ve talked with seem to think it is a rainier than usual year.

We hiked for about an hour or so and then made our way back to the hotel to check out.  From there we went east to the high plains.  I have wanted to see the plains (which everyone keeps telling me is boring).  M and I independently managed to find the same place to visit that would satisfy his need to climb a little and my wish to see the plains.

The weather was not cooperative (for hiking) at first.  The problem we had was determining whether we should continue to our destination or give it up.  Being out on the plains (or prairie) where the sky is so wide open, you can see storms coming but we had no idea how fast or slow the storms were moving.

Our destination was Painted Mines Interpretive Park in El Paso County, Colorado.  We found our way there, walked out a short way to an overlook, heard the thunder rumble, saw the lightning light up the sky, and decided to go back to the nearest town to search for some Wi-Fi.  We couldn’t find a library but we did find a coffee shop/internet cafe that turned out to be a jewel of a find.  We had lunch there and the food was fresh and delicious.  I have to admit that was unexpected given the size of the town and the apparent desolation of the area.

The radar showed a break in the storms so we went back to Painted Mines, donned our rain gear, and set out on our hike towards the middle of the Painted Mine formations.  The sky continued to remain threatening throughout most of the hike with the occasional rumble of thunder in the background.  We were lucky in that the storms seemed to move around us.

It was windy and cold when we started out.  The wind died down later and that was an unfortunate turn of events as it invited large swarms of mosquitoes to come out and feed upon us.  It’s a good way to burn calories, running from mosquitoes.  M and I haven’t been on that kind of run since August of 1984.  We were vacationing in Hunting Island, South Carolina (one of my favorite spots in the world!), and had gone out on a nature hike through the marshes.  Five or ten minutes in, we were attacked by what seemed like billions of mosquitoes and ended up running on the boardwalk through the woods and marshes, taking turns wiping mosquitoes off each other.

I remember the year and the vacation well because that was when M the Younger entered our lives although we didn’t know it at the time and didn’t meet him until nine months later.

Well, my friends, I am exhausted and as much as I would like to continue rambling on about our day, I need to go to bed.  The hike turned out well (except for the mosquitoes).  We are now back in the Boulder area so we can spend some more time with M the Younger and Merdi.  We drove through a dust storm and rain storms to get here.

Driving through a dust storm

All that atmospheric disturbance resulted in one of the most unusual rainbows I’ve ever seen.  Sorry, no pictures.  I was busy admiring it and by the time I pulled out the camera it was too late to capture it.  The mix of weather also brought a beautiful sunset.

Sunset on the road to Boulder

(This post was written around midnight last night.  Now we’re off to do some morning hiking before meeting M the Younger for lunch.  We’ll probably spend the afternoon doing laundry as M and I are both pretty much out of clothing to wear that isn’t dirty and smelly from all the hiking we’ve been doing.)

At Robbins Crossing (the 1840’s era Ohio village) we met Gray, a red-tailed hawk.  She’s a beautiful bird.  There were so many people gathered around that I didn’t get a chance to ask how she had come to be there.  I’m guessing she was injured as that’s usually how a red-tailed hawk ends up being an exhibit at these places.

(Gray with her handler.) 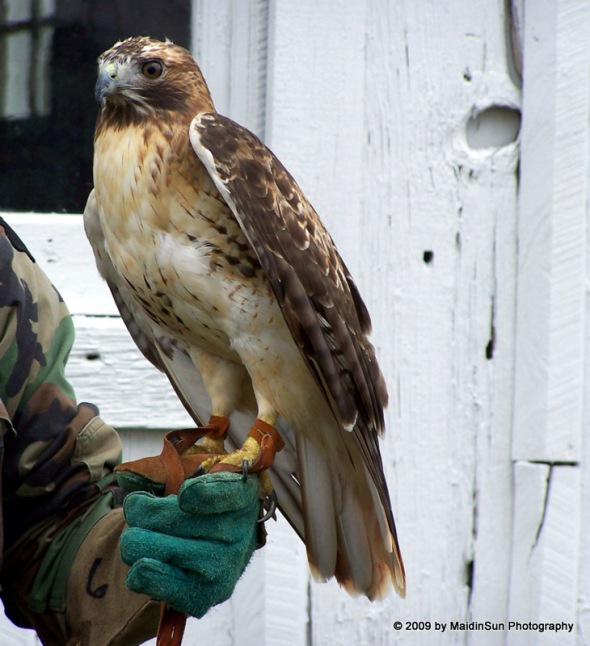 You can read more about the red-tailed hawk here.  We see them quite frequently in the trees surrounding the pond, especially during the winter months.

This morning’s moonset was gorgeous.  I should have dragged out the tripod and the camera and taken a few photos, but sometimes all I want to do is watch and enjoy.  So that’s what I did, watched and enjoyed the reflection of the moon in the pond, then looking at the moon itself as it slipped down behind the trees at the back of the pond.

I’m glad I took plenty of photos during our train trip as I really don’t have much to write about (unless things like laundry and housekeeping interest you).  It’s kind of nice to have a quiet, uneventful life for a change.

Been a while, eh?

I’m still walking and still keeping track.  Just been too lazy to post about it.  Without further ado:

I had a couple of weeks where I took it easy (walked fewer miles), mostly because I haven’t been quite up to par lately.

The other day M was remarking that we haven’t seen the hawks around here lately.  Lo and behold, two of them showed up this morning.  I managed to catch one with the camera:

It’s not a great shot, but I took it through the living room window.  A better lens would have helped, too.  I’ve been wanting to buy a new lens for the camera for a while.  However, the camera is having some technical difficulties that may mean it’s dying.  If that’s the case, I’ll have to save up my pennies for a long while for a new camera.  Let’s hope this one hangs on for a few months.  Another year would  be really nice.

I’ve been pondering NaBloPoMo.  I kind of hate to miss it, but I’m not sure I’ll be able to post every day.  If I can get a few posts ready to go ahead of time, I’ll do it.

Today’s view of the pond:

Don’t tell M I was taking photos of the geese instead of chasing them off.