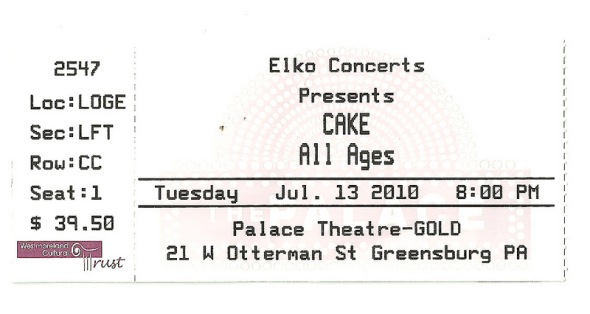 Yesterday afternoon M and I hopped into our trusty car and took ourselves off to Greensburg, Pennsylvania, a town we’ve never visited before.  What brought us to Greensburg was The Palace Theatre and the band CAKE who performed a concert there last night.

(Warning:  Terrible photos ahead.  I had to shoot out the car window this morning when it was foggy and the windshield could have used a bit of cleaning.  There are no photos from the concert last night for reasons which will soon be revealed.) 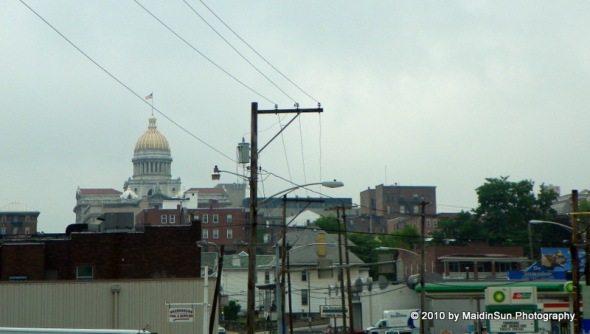 Greensburg is bigger than I was expecting (my own fault for not researching before we went).  I’d like to take some time to walk around and explore it someday as it looks like an interesting town.  We didn’t have time for it this trip.   We arrived in time to check into our hotel, have dinner, and then head over to the theater.  Or theatre, as the case may be.  There may be a another trip to Greensburg sometime in our future, one of the reasons for our quick drive through town this morning.  It was on that quick trip that I took some quick photos.

The Palace Theatre is a relatively small venue (it seats 1,369 people).  The theatre was opened in September of 1926 and is now owned, operated, and being renovated by the Westmoreland Cultural Trust.  It’s a beautiful theatre with a cute little ticket booth at the entrance.  I tried to take a photo of the ticket booth on our drive-by this morning but it came out blurry with car window reflections and not worth posting.  Our seats last night allowed me to visually enjoy exploring the original murals in the loge area that have been refurbished.  I love old theaters and I would venture to guess that a large percentage of the concerts M and I have seen over the past three decades have been in small theaters built in the 1920’s and 1930’s.

CAKE was great and it was one of the most enjoyable concerts I’ve been to in a long time.  I’m not sure they would appreciate being described as “enjoyable” so let’s go with FUN instead.  And it was fun.  One of the problems I have with the small and some large venues is the sound.  It’s often too loud.  Songs-unrecognizable loud.  CAKE must have some great sound people because it was perfect.  Loud enough and clear enough.

I did not take my camera along for the show because the ticket clearly states on the back that cameras are not allowed (making it not worth the bother of trying to get one in).  This leads me to want to editorialize so bear with me for a moment.  With the advent of phones capable of taking photos as well as video, I’m not sure there’s a point to the prohibitions against audio and/or video equipment at concerts anymore.  Granted, you don’t want an unauthorized someone walking in with a professional system to record the concert and sell copies of the recording, but my point-and-shoot camera is not up to professional standards.  It is better than you might be able to get right now with a phone but I’ve seen some nice photos from phones and I imagine the technology is catching up quickly if it hasn’t already caught up.

That said, John McCrea (lead vocalist) made an outstanding point about it all during the first half of the concert when he made a small speech (badly paraphrased here since I didn’t memorize it) about how he understands everyone is carrying around their bit of modern technology, trying to capture, hold onto, trap, and/or keep the moment, but he asked that everyone put the technology aside and just BE in the moment.  Relax, have fun, be here now.  The idea got a big round of applause and cheering, although I’m not sure how many people put away their gadgets to do just that.  To be honest, my soapbox stance in the paragraph before this one was half-hearted as I have found that there are times when I’d rather do as McCrea advised and just enjoy the moment rather than record it.

I thoroughly enjoyed the audience participation portions of the concert, being part of the sound that filled the theatre.  My throat is sore today but that’s my own fault for being prodded into singing louder.  I love to sing and don’t do it often enough so the sore throat is a small price to pay.  Thank you, CAKE, for enticing me to join in the fun.

If you’re interested in contests, you can win a tree from CAKE.  They gave away a very nice apple tree last night.  Check out the CAKE Tree Gallery here.  The guy that won last night had to promise to plant the tree and take pictures of himself with the tree to put on the Tree Gallery so we can all watch as the tree grows older and stronger and he grows older and frailer.  Those of us who have planted trees know:  Such is life.

(In the Greensburg Train Station.)

If interested, you can check out the setlist (and listen to it) here.  A little personal trivia:  I can’t hear War Pigs (CAKE does a cover of it and they performed it last night) without thinking of M the Younger who plays the drums and practiced the drum parts of War Pigs over and over and over, incessantly, for what seemed like a long period of time.  Years.  I know the entire drum part well and can identify the song from that alone. 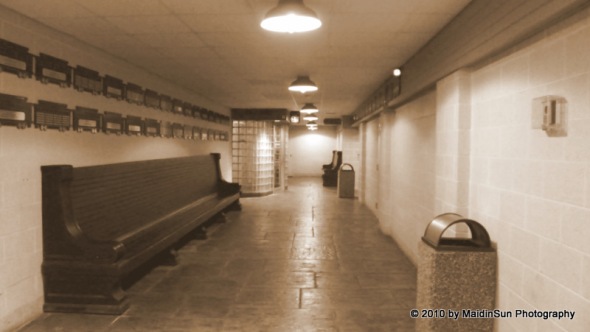 We stayed in a hotel about 7 minutes from the downtown portion of Greensburg.  This morning we drove back in to look for the train station as we have been giving some thought to taking a train ride and Greensburg might be easier and cheaper than Pittsburgh as a starting point for the not-quite-planned trip-in-the-making.

(Looking out the window of the train station.)

We drove over, parked, took a quick look around and then made our way back to the car and back home.

And now it’s back to my regular programming.  I got a call just a little while ago from Hilgert’s farm.  The yellow wax beans are picked and ready for me to bring home and preserve.  I’ll be blanching and freezing them as I prefer freezing over canning (less loss of nutrients that way).  I suspect that will take up much of my day tomorrow.  One day’s work for a winter and spring of locally grown, delicious and nutritious vegetables is well worth it.