Do you hear that? 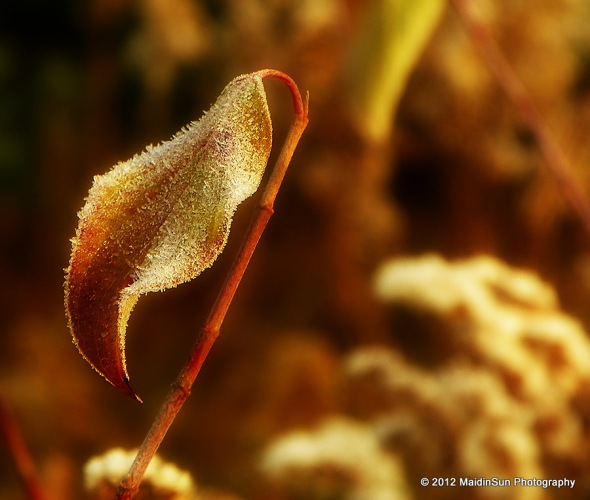 Lean in a little.  Listen carefully.  Ssshhhh.  Listen.  Do you hear it?

END_OF_DOCUMENT_TOKEN_TO_BE_REPLACED 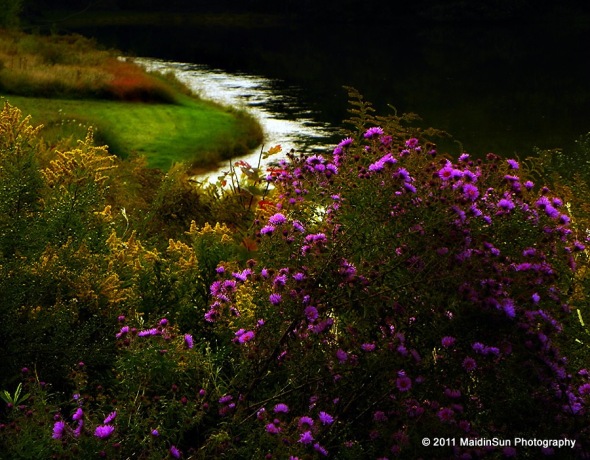 While out and about on my walk today, I started thinking about why I enjoy this time of year so much.  It is an unpredictable time of year.  We’ve had rain with the occasional sunny interludes throughout the day.  I’ve been outside several times today, and never know what kind of weather I might walk into.  At least it isn’t snow yet.

END_OF_DOCUMENT_TOKEN_TO_BE_REPLACED

The rain has returned, and it looks like it’s here until tomorrow morning.  It’s chilly too.  It would be a good day to light a fire in the fireplace.  I have been slightly (just oh-so-slightly) tempted to turn on the heat to take the edge off the chill and damp, but I can’t bring myself to do it on a day that is still counted, according to the calendar, as a summer day.  Besides, we recently pre-paid our heating fuel bill for this upcoming season of cold, and that stuff ain’t cheap.  I’m going to be investing in fleece and other things to keep warm this winter.

END_OF_DOCUMENT_TOKEN_TO_BE_REPLACED

41: A visit from Jack Frost

Jack Frost is a fairy small;
I’m sure he is out today.
He nipped my nose
And pinched my toes
When I went out to play.

I was up and out early this morning to catch the fog and frost at sunrise.  Brrrrrr!  It was a clear, crisp, 23 degrees.  Jack Frost had obviously had a little fun overnight decorating everything with lovely crystal patterns.  In case you are not familiar with him, Jack Frost is an elfish creature from English folklore, often considered a variant of Father Winter.  Some see him as a fairy or winter sprite.  Whatever the case, he brings the cold, crisp weather that allows him to paint the land with frost.

A lot of folks around here seem to think that the early arrival of summer and the crops means we’ll have an early and harsh winter.  I dunno.  We usually have our first snowflakes flying around by Halloween but there’s been nary a sign of the white stuff so far.

I went by Plinky for a writing prompt (because enough already with the weather!).  Today’s question is:  Have you ever lied about your age? 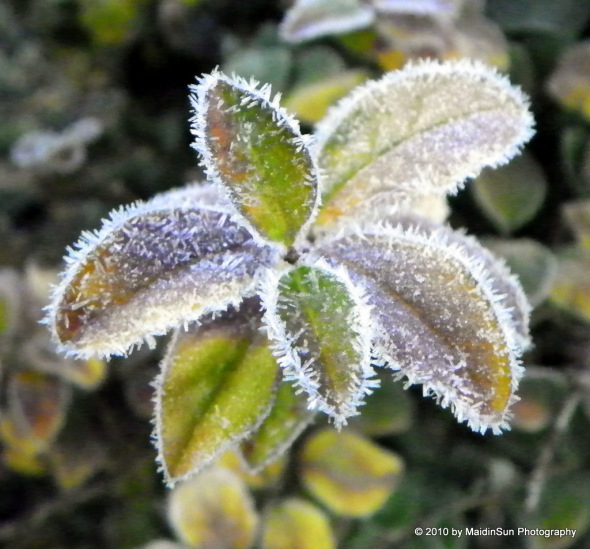 There are follow-up questions to that but I won’t need them.  I have never lied about my age.  I’ve never seen the need to and I’ve never understood why any adult would.  I’m not counting minors because we all know why someone under the drinking age would be likely to lie.  Not that drinking alcohol is the only reason but I’m betting it’s the number one reason.

I have a friend who thinks that once you’re past the age of 35 (40 tops!) you should start telling people you are older than you are.  That way, she says, people will think you look great for your age!

A woman I know was traveling outside of the U.S. on business.  She had to take a small plane to her ultimate destination.  She had heard that she would be asked about her weight. I don’t know if she contemplated lying about her weight or not.  I would guess not as she doesn’t seem the type to lie although I am sure she was reluctant to give her exact weight.

It didn’t matter, in the end, whether she planned or even thought about lying.  Everyone was required to step on the scale before boarding the plane.  She said she was terribly embarrassed since it was done where everyone can see everyone’s weight results.

(Sunrise through the frosty crabapple tree.)

Have you ever lied about your age?  Or your weight?  Or some other number that might be important?

The weight listed on my driver’s license is incorrect.  But that’s because I’m due for a new driver’s license next year.  I’d better get serious about my diet and exercise regime if I don’t want to be embarrassed about my weight when they ask me what it is.  I am grateful that, so far, they don’t have scales at the Bureau of Motor Vehicles.  If I want to be weighed publicly, I’ll join Weight Watchers.

I learned fairly early in life that lying doesn’t work out well for me.  I’m not good at it, for one thing.  I blush easily and that tendency gets worse when I’m lying.  Then there’s all the trouble I have to go through to remember it.  I have enough trouble remembering the truth (or my perception of the truth, as the case may be).  Trying to keep track of lies is too much for my poor memory.  Besides, for as long as I can remember, I never ever got away with trying to pull one over on someone.  Never.  I always got caught.  That’s why that lesson was learned early and well.  (And for those who think children are honest and never, ever lie, I have one question:  You don’t spend much time with children, do you??)

I once worked with a guy (known by many as The Psycho Pharmacist From Hell) who told more lies than truth about anything and everything.  He was distrustful of everyone.  I think that’s because he was a liar and so, he assumed everyone else was a liar too.  He was a crazy guy who probably should not have been working as a pharmacist.  Thankfully the people in charge agreed and fired him.  I often wonder if he found another pharmacy to work in.  Probably.  There seems to be some sort of professional courtesy in that field (as with doctors, for instance) wherein they lie or don’t tell when it comes to the reasons for letting them go. 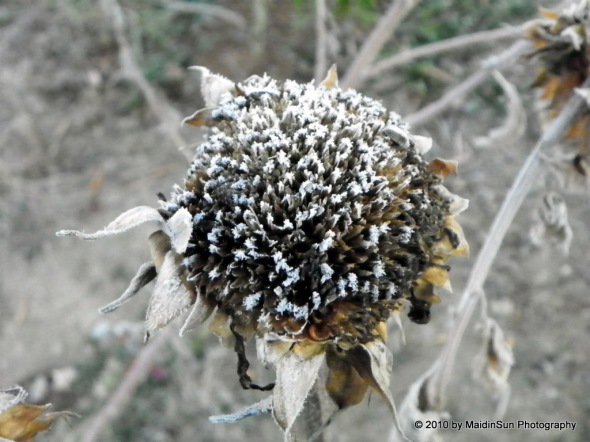 Well, that was a long and rambling answer to a short question.  I could have just said no.  But then I might have had to ramble on about the weather some more since I don’t seem to have much to write about lately.  Hopefully this was a little more interesting. 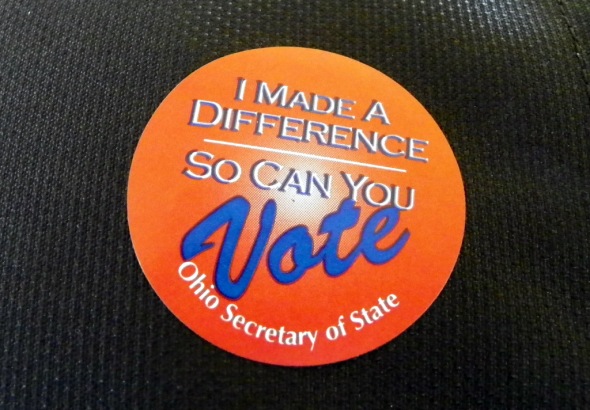 Never let it be said that I didn’t do my civic duty.  🙂

I used to love night best but the older I get the more treasures and hope and joy I find in mornings.

This was originally set up as a scheduled post but we have a few minutes this morning before we have to catch the train home so I figured I’d go ahead and post.

The photo is another from September 29th.

Yesterday we went out to visit Mom, so to speak.  She’s not really there, of course.  It’s just her grave and the place where her body now resides.  Dad wanted me to see the permanent  grave marker which, as you may recall, was not in place when I was there in April.

(Mom’s grave and the flowers we brought.)

It was a beautiful day to be outside.  M and I took a couple of half hour walks throughout the day just to enjoy it.  I almost complained about the heat of the sun at one point but stopped myself just in time with the reminder that we are not likely to experience many more days like this once we go back to the Bogs.  Clouds rule the late autumn and winter months.

On our way back from the cemetery we stopped off at the church where I was baptized in 1959.  I don’t know how many times I have passed that church and never knew I was baptized there.  Dad happened to mention it on our way to the cemetery.  He also showed us where Mom lived when he was dating her and the first place they lived when they got married.  He told a few stories about me.  Apparently I did not like grass when I was a toddler.  I refused to walk on it.  Funny.  Now I love to walk in the grass.  Barefoot, if possible.  Maybe I was worried about hurting it.

I took photos of the outside of the church and might post one when we return home.  As we were walking around the outside a man who was working in the church invited us to come in.  He introduced us to the priest there and Dad explained why we had stopped.  The priest showed us around.  The worker who let us in had just built a new altar for the church, hand carving all the woodwork.  It was beautiful work.  Amazing, really.  The church itself is 130 years old and suffered from some structural problems (buckling) that they managed to repair quite nicely.

I’m glad we stopped.  I’ve always wanted to see the inside.  The stain glass windows are dazzling.  It’s not a very big church but it is packed with simple, beautiful statues and icons.  They are getting ready to restore the Stations of the Cross which have been peeling and chipping over the years.

The afternoon was spent watching the Gamecocks beat the Crimson Tide (football — on television).  Now that was a BIG surprise.  Being USC fans (for good reason — M graduated from there and I was a student there for a year), it was a well-received surprise.

My sister and her husband did this yesterday.  I see they are having an event in Ohio next year.  It kind of looks like fun, and my sister and her hubby had a blast getting muddy and climbing around.  Might be worth considering if I really feel the need for a challenge (and a viking helmet).

Today’s outdoor adventure took me back to the park near the hotel where we stayed.  The morning was sunny, clear, and a little chilly.  M and I jogged a bit and then played on the exercise course.  Someday, if I practice, I might be able to do one chin-up.  Today I actually jumped high enough to hang from the chin-up bar.  That’s a vast improvement over the other day when I couldn’t reach it.  (Go ahead and laugh.  I did.)

I’d better wrap this up and pack up the computer.  It’s almost time to head to Philly, return the rental car, and hop on the train.  I wonder if the trees in the mountains have gotten a little more color in the past few days?