One of the first things I did when we moved to our current home was plant mint in a spot where nothing else seemed to grow.  I started with Apple Mint.  Apple Mint loved it there, thriving and spreading.  Then I cleaned out some of Apple Mint and introduced it to Unknown Mint.  (When I bought Unknown Mint it was labeled as “spearmint” but the leaves don’t look like spearmint.  In looks it reminds me of oregano or marjoram but it does have a minty scent and flavor to it.)  Unknown Mint loved it there too and got along well with Apple Mint and they have been sharing their enclosed area quite well, splitting it almost in half and mingling somewhere in the middle.  Apple Mint can be a little aggressive, but she takes off for other areas rather than bullying out Unknown Mint.  Apple Mint has even popped up in the cracks of the front porch and across the sidewalk from where she is located.

Off in the corner, taking up very little space, is False Mint.  False didn’t mean to be false.  It was my fault that False came to be sitting in the corner, wondering what to do with itself.  You see, my favorite mint thus far in life is Pineapple Mint.  It has variegated leaves of yellow and green and tastes of pineapple.  I bought a little pineapple mint plant when we were living in Kent and planted her in the garden out back in a space where she had room to stretch out and enjoy herself.  It was early spring when we moved from Kent to our current location.  We gathered and/or dug up plants we wanted to take with us, planted them in a space near the barn as a temporary place to grow, and then hoped they would do okay until we finished the house renovations and could get back to them.

(This is not a mint and for this post I’ve named it False Mint but that is not its real name.)

I planted what I thought was the Pineapple Mint in the corner of the area where Apple and Unknown are now thriving.  I put her there because I knew that was where I wanted the Mints to hang out.  Well, it turned out it wasn’t Pineapple Mint at all but an imposter who looks a little like Pineapple Mint (a real gardener, I’m sure, would have known the difference).  False Mint is lacking the aroma and flavor of Pineapple Mint, does not have the square stem or leaf pattern of mints, and I’m not even sure it is edible as once I realized it was the wrong plant, I gave up on it.  I never bothered to look it up, thinking the Mints would eventually overtake it and force it out.

False has been there for about seven years or so, holding on to its little corner of the patch.  Apple joined it later that year and Unknown the following year.  I’ve been looking for another pineapple mint plant since that time but hadn’t found one until this spring. 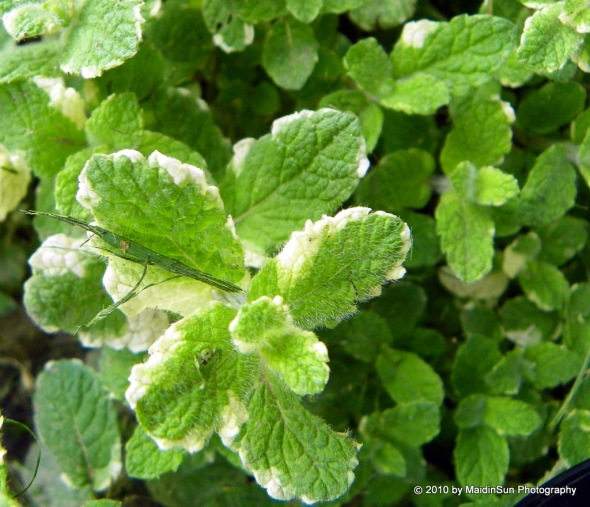 I thought about pulling False out of the mint bed.  It was a fleeting thought that was carried away by the braveness of the little plant that has held its own against the Mints.  I have never had to weed the mint bed.  Apple and Unknown won’t let the weeds in.  There is a little fairy residing in the Mint Patch but she’s another story for another time.  Lemon Verbana lived in the mint bed for a year or two until she succumbed to a harsh winter and we were left with nothing except her skeletal outlines along the side of the house.

When I look at the differences between False and Pineapple now, I don’t see how I could have made such a big mistake.  False has bigger leaves, for one thing, and the edges are smoother than Pineapple’s.  I am fairly new to gardening, having always had a black thumb rather than a green thumb.  I killed houseplants just by looking at them.  Or so it seemed to me.

I am still not a master gardener.  I don’t see that as my path in life.  But I have finally learned how to grow a few things and keep them alive from year to year.  The Mints, of course, have never needed my help.  They are experts in their field (or bed, as the case happens to be).

I made up a batch of “sassy water” today.  I can’t remember where I first heard or read about sassy water.  It’s the kind of water I would expect to be served at a spa.  It is cool and refreshing and you can practically feel it doing healthy things to your body when you drink it.  I don’t have an exact recipe but I can tell you what I put in it.

Chill overnight, strain and enjoy throughout the next day.  I use a small strainer and strain as I pour.  When I finish the water, I eat the cucumber slices.  They are delicious, having absorbed the lemon, ginger, and mint flavors.  Crunchy, too.  Sometimes I throw them into salads.