Do you hear that?

Lean in a little.  Listen carefully.  Ssshhhh.  Listen.  Do you hear it?

END_OF_DOCUMENT_TOKEN_TO_BE_REPLACED

On the Towpath Trail near Big Bend.

I went for a bicycle ride on the Towpath Trail this morning.  It was a fun ride with some uphill work, some coasting, and some level spots in between.  A little like life, eh?

END_OF_DOCUMENT_TOKEN_TO_BE_REPLACED

If you look up the meaning of the deer, the words “gentle” and innocence” show up a lot.  Some describe the deer as a messenger of the wilderness and/or harbinger of serenity.  Deer medicine, it is said, gently lures one to new adventures.

END_OF_DOCUMENT_TOKEN_TO_BE_REPLACED 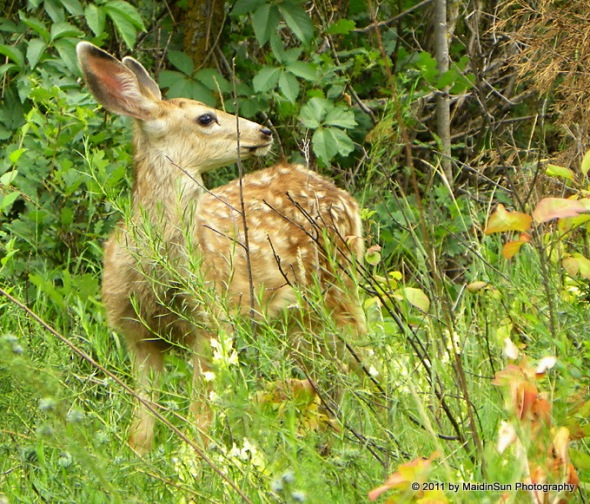 Today and tomorrow are going to be full of family and fun.  M and I are going to be visiting with our granddaughters, our oldest son, and his wife.  I decided to go ahead and schedule a post just in case I don’t find time to do one tonight.

END_OF_DOCUMENT_TOKEN_TO_BE_REPLACED

30: The leaf and berry collection 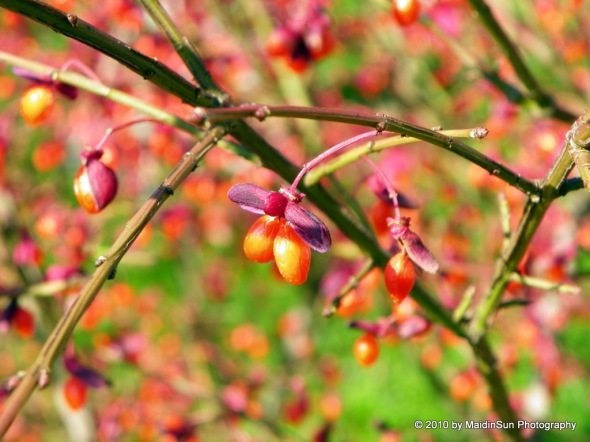 When I was out for my walk today I was reminded of a project we used to do in elementary school.  We had to collect leaves from different trees and then press (iron) them between two sheets of wax paper to preserve them, labeling each with the name of the tree.  It was always one of my favorite school projects.  I was thrilled when my own children were given a similar project as it gave me an excuse to do it again.  But even that (helping my children) was a long time ago (or so it seems). 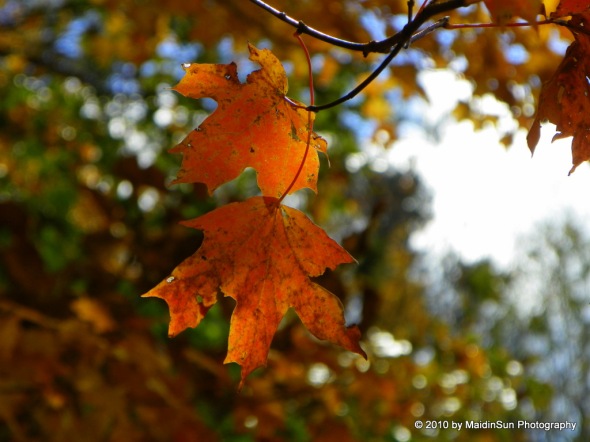 Photographing leaves, it seems to me, is another way of collecting autumn and learning the names of trees.  Unfortunately I’ve never been good at the names part.  I have a difficult time remembering names.  And faces, sometimes.

It’s day 30 of my commitment to go outside each and every day for a year.  It’s still early in the commitment but even in this short period of time I feel as though I’ve changed in ways I am unable to describe just yet.  One change I can find words for is the way I now approach each day with excitement and wonder.  Every walk I’ve taken over the past 30 days has brought a gift of some kind.  The biggest gift of all, so far, has been a deep appreciation and gratitude for the area and the land on which M and I live.  There is so much beauty out there, big and small and in between.

Because I feel I’ve been given so much during this commitment, I want to give something back.  I’ve been thinking about ways to give back to this little piece of the earth I’ve been walking.  What I’ve come up with will be fodder for future blog posts.

I’ve also been thinking about how I can thank those of you who have been following me here at the Bogs blog.

(A variety of yellows and greens.)

So, for the first time, I am having a Give-Away.  Here is how it will work:

The prize is a free print of almost any of my photos.  I qualified that with “almost” because some of my photos do well on the screen but not in print.  Also, there are a few with deeply personal meaning to them that are not available as prints. 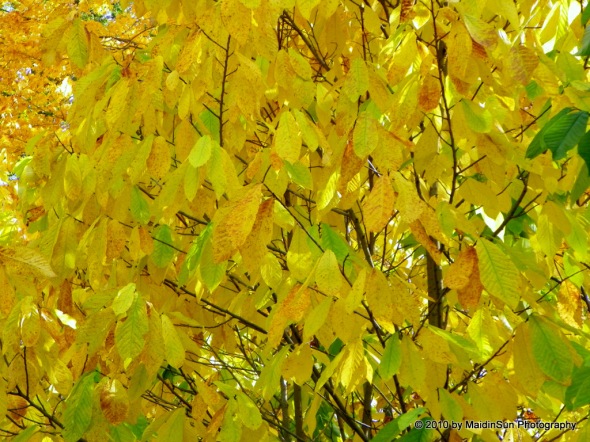 (A cascade of yellow.)

The winner (the person whose name is drawn from the hat) can pick from almost anything from the Bogs blog, Bountiful Healing, or my galleries at ImageKind and MaidinSun Photography.  I think 11×14 is a good size, but that might depend on the photo that’s picked and whether or not it’s been cropped as well as the personal preference of the winner (cos if you want something smaller, no problem).

So, head on down to the comments section and enter the Thank You! Give-Away.

I took my walk early today.  There’s no way of knowing what the weather will do in spite of all the meterologists’ attempts to forecast what the day will bring.  Today, it is said, will bring clouds and sun and a high of 55 degrees (F).  We had our first freeze last night with the temperature dipping down to 32.  It was still frosty and cold when I went out.  I am going to have to start bundling up.  A hat and a pair of gloves would have been welcome.  It was mostly cloudy and we had a few sprinkles after I came back inside.

END_OF_DOCUMENT_TOKEN_TO_BE_REPLACED

Shortly before noon yesterday M phoned and asked if I’d like to go do something. It was so nice outside after the rain moved through, and he was at a standstill at work, waiting for some supplies, so to speak.

We decided to go to Valley Forge National Historical Park. We’d both been there on school field trips as kids, but I don’t really remember much about it. I think it’s a terrible shame that all those good field trips were wasted on me during a time when I least appreciated them: Childhood. M and I have retraced a few of those school field trips since we’ve been back east and I can’t for the life of me figure out why I thought all this stuff was boring. Now I’m finding it all fascinating. I’m enjoying learning some of the history I should have learned when I was in school had I been paying attention (a little nod to Whad’Ya Know? there).

We started at the Welcome Center, always a good place to start. We picked up a map, had a quick look around at some of the exhibits, and then headed out for a 6-mile walk/hike around the park.

It was a beautiful day for a hike. Sunny, warm but not hot, with a good strong breeze that kept us relatively cool. Most of the walk went through areas that provided occasional shady spots which also helped to keep us cool. The last mile or so of the walk was the most brutal because there were no shady spots and it felt as though the sun was beating down on us. We were also getting pretty tired by that time and ready to finish the walk.

I’m going to skip the history lesson. You can visit the website (link provided above) for that if you should so desire. I did find it interesting that some of what I’d learned and/or thought about the encampment at Valley Forge was more myth than fact.

Here are a few photos:

(Somewhere near the beginning of the trail. Photo by Robin. June 2007)

The cabins, which are scattered throughout the park, are not the original cabins built during the encampment in Valley Forge in 1777-1778. They are, of course, reproductions.

One of the wonderful things about the day and the photographs is the play of light and shadow that was going on with the clouds occasionally blocking the sun. In some instances, such as the photo below, the light was perfect.

The one-room schoolhouse was built about 35 years after the Revolutionary War encampment at Valley Forge.

(Can you tell I enjoyed the meadows? VFNHP. Photo by Robin. June 2007)

One of the things I was unable to capture with the camera was the way the wind created waves through the grass in the meadows. It was a beautiful sight.

There are deer almost everywhere in the park, some of whom are not exactly shy. I read that they have a white-tailed deer management problem and that they’re currently trying to solve it. I wonder if the deer population now is higher than during the encampment? I’m guessing it probably is.

That’s probably enough of Valley Forge. I took 219 photos, most of them of the meadows. I’m sure you don’t need to see them all.

Today has turned out to be another good day for a walk. We’re off to Longwood Gardens again this afternoon to see what changes have occurred over the past couple of weeks.