State of the rut update

, made my grocery list, and went off to the store to pick up what was needed.  Not a lot as it turned out, because I made my decision based on things I had on hand that needed to be eaten.  One of those things was a big package of corn tortillas.  Someday I’d like to start making tortillas at home but for now we use the store-bought variety.  The Colorado Cache Cookbook

has a chapter titled Mexican Food which includes all sorts of enchildadas that are made with corn tortillas.

In the interest of full disclosure, you should know:

I decided on Cheese Enchiladas.  The sauce for the enchiladas was different than the sauce I make for “Suzi’s Enchiladas” so I thought that would qualify it as getting out of the rut I was stuck in.  I’m used to making enchilada sauce with lots of tomatoes and spices, then cooking it down to thicken it.  The recipe in the Colorado Cache Cookbook uses chicken broth, tomatoes, and chiles, with flour to thicken it.  There are no spices to be found in this recipe.

Another admission:  I added spices (cumin and chili powder).  I used tomatoes with hot chiles.  I added vegetarian refried beans to the cheese stuffing.  Less cheese, more beans.  If I’d had some freshly cooked beans available, I’d have put them in there instead of the canned refried beans.  The addition of the refried beans was tied to using what I have in my pantry as well as cutting back on the cheese.

I’ve always thought of recipes as a general outline that I can fill in to fit my tastes.  This one was no exception.  To be honest, I’m not sure we would have liked the enchiladas without the addition of the spices.  The sauce was a little odd, perhaps because it was different than any other enchilada sauce I’ve tasted.  It wasn’t bad odd.  Just different odd.

I did not take photos of the plated food as they were a mess to get out of the baking pan.  They fell to pieces and looked like a big pile of mushy stuff with cheese.  Not attractive or photogenic.  I should have taken pictures right after I rolled the enchiladas and placed them in the baking dish.  They were lined up and ready for their close-up.  In my haste to get them into the oven (it was late and they took longer to make than I had anticipated), I forgot.

They tasted good, especially with the addition of the called-for garnishes of avocado slices, chopped green onions, and sour cream.  I could have spiced them up more as they needed a little more flavor and heat.  Putting jalapeñoes into the cheese and bean mixture would have worked well.  I also think using whole beans rather than the canned refried beans would have made them better, too.

Next week I’m going to pull out a vegetarian cookbook and take OmbudsBen’s suggestion:

I get stuck in ruts, too, so empathize with your dilemma. As far as trying new things: Make it really challenging. Pick out a cookbook with an index, open the index without looking, and point to find the nearest recipe.

That will make it fun and exciting.  Thanks, OmbudsBen!

Stuck in a rut

I’ve been stuck in a cooking rut lately.  You’d think that wouldn’t be possible given the plethora of food available now.  I try to buy local when possible and right now local is a bountiful harvest of choices. 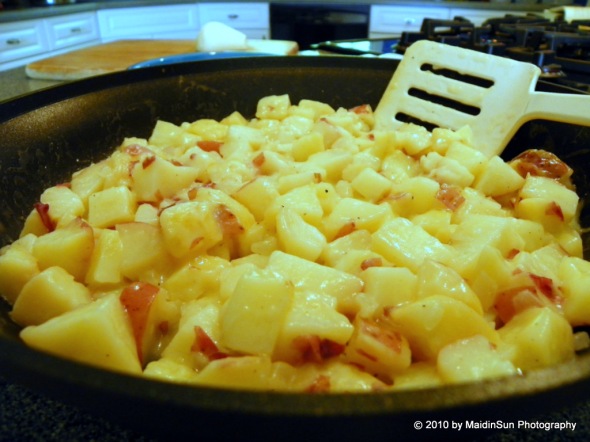 To give you some idea of how stuck I am, I made the above vegetarian version of German potato salad twice in one week.  Twice!  Granted, I like it and don’t mind eating it practically every day.  But I’m not sure M feels the same way.  He likes variety in his diet.  (The photo, by the way, is a little on the yellowish side, making the dish look cheesy.  There is no cheese in it.  It’s the lighting in the kitchen that brings on the yellow.) 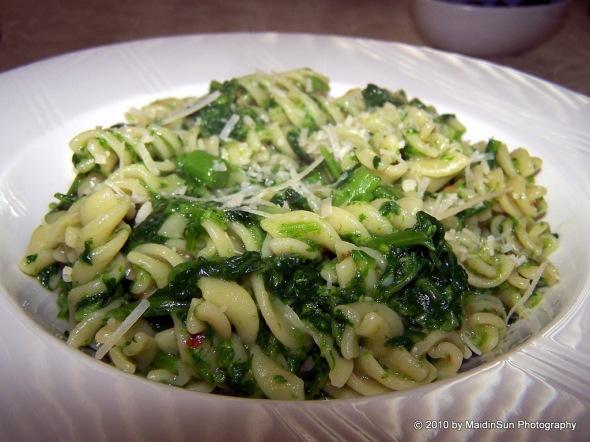 I also have a variety of choices when it comes to cookbooks, recipes collected, and tastes.  M and I are adventurous eaters to some degree.  The caveat has more to do with me than him.  I have this thing against all things slimy.  Snails in particular, but there are other slimy choices that didn’t and still don’t appeal to me (steamed okra, for instance).  That said, I will try things (even slimy things) because it doesn’t seem right to me to give up on whole food groups (in this case the slimy food group) just because I didn’t like that sea-abalone-and-Chinese-mushroom dish that we had twenty years ago.  Tastes and palates change if you’re open to that change. 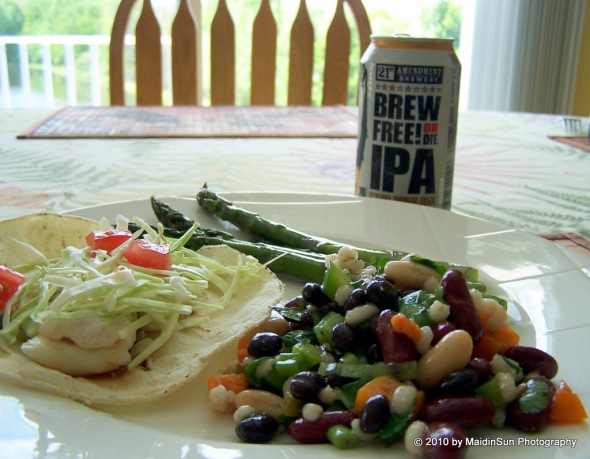 But back to the rut.  I have decided to do what most people do when stuck in a rut (no, not watch the Food Network — I don’t have cable, remember?).  I have a good collection of cookbooks so I’m going to open one every week and randomly pick a recipe from the chosen cookbook.  Not to worry.  I won’t be copying the Julie and Julia thing.  I’ll be using different cookbooks rather than following one.  There was a time, almost a decade ago, when M the Elder, M the Younger, and I took turns picking out one new recipe per week to try.  We were on an ethnic kick, wanting to try foods from different countries.  My favorite at the time turned out to be Ethiopian even though the spice mixtures were labor intensive because I had to work with a mortar and pestle, not owning a food processor or coffee grinder (which has since been remedied!).  I burnt out a borrowed blender trying to grind the spices and it seemed best to do them by hand after that.

The cookbook I’ve decided to pick from this week is the  Colorado Cache Cookbook: 30th Anniversary Edition

.   M the Younger and Merdi gave it to me last Christmas.  (Cookbooks are always good gifts for me and I have several on my Amazon Wish List.  Truth be told, almost ANY book is a good gift for me but I do have a special place in my heart for cookbooks.  They are slices of history, moving through the various food fads and fashions.)  As for which recipe, you’ll have to wait and see as I haven’t decided for sure yet.  I have it narrowed down to three possibilities.  I’ll let you know which one I choose and how it turns out.

The Queen Anne’s Lace is beginning to bloom in the wildflower meadow.  Here, I’ll show you:

It seems early.  I could be wrong.  I should go back and look at my blog posts from previous years to see if I mention it.  I know I’ve posted photos of it either here or over there, at Bountiful Healing.  Ah yes, I found it and have decided to revive the old post:  Sanctuary.   Head on over and have a look.  I’ll wait.  The original was posted on July 17, 2008 so I’m right and the Queen Anne’s Lace is a little early this year. 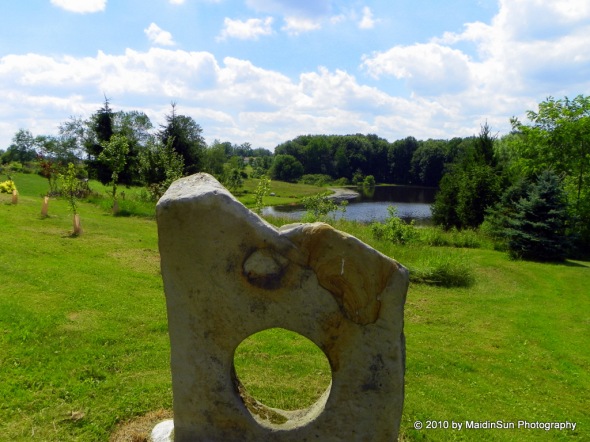 (A view of the pond from the ‘standing stone’ on the eastern edge of the property.)

I wrote about the standing stone way back when, too.  You can find it here.  Just scroll down past the whining about the job I am happy to say I no longer have.