To me, there is something a little sad about zoos.  I know the majority of us might not otherwise be able to see most of the animals that we can visit in zoos, but still, I find it sad.  That’s especially true when I see the big cats, such as the lion above.

On the other hand, he’s probably living a more comfortable life than a lion in the wild.  Maybe he’s even enjoying it, being able to lounge around and have someone else bring him food.  Oh wait!  That’s often the case with male lions anyhow.  The females do the hunting.  To be fair to the males, they do spend a lot of time and muscle patrolling and protecting their territory.

I’ve been a big fan of Tori Amos for, well, I don’t know.  Since the early 90’s, I suppose.  The person that introduced me to Tori Amos’ music calls her “the goddess of the piano.”

Boys for Pele is not about Pele the soccer player, but about Pele the Hawaiian volcano goddess with the boys being the sacrifices thrown into her fiery pit to assuage her rage.  I was going to write that if you’re not familiar with the music of Tori Amos, you might not want to start with Boys for Pele; however, I’m not sure it matters where you start.  Some of her music can be pretty intense (“Me and a Gun,” a personal story of sexual assault, from her album Little Earthquakes comes immediately to mind) and some can sound almost whimsical in comparison to the heavy stuff while still covering serious or emotional subjects.

Click here to listen to “Winter.”  I picked this song for the obvious reason (it’s winter!).  Or check out Caught a Lite Sneeze (which is from the album Boys for Pele).

We had more snow overnight and this morning.  I’m not sure what the total is for the season.  We have about a foot of snow on the deck right now.  There would be more if we hadn’t had a couple of thaws.

(Today’s view of the pond from the cattails.)

It’s still a dark, bluish-gray.  We haven’t seen the sun since last Saturday.  Hopefully we’ll get at least a glimpse of it tomorrow.  I’m told the possibility exists.

Four deer ran through the outside meadow.  I also saw a red-tailed hawk and a couple of small woodpeckers along with the usual chickadees and doves.  The only other wildlife I saw was M speeding down the hill on a sled. 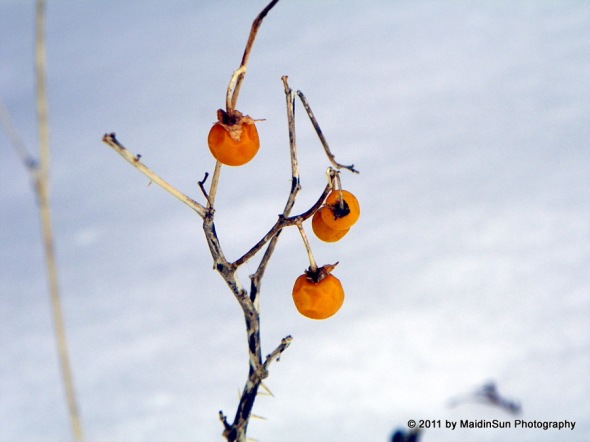 I looked hard for something different to photograph.  I’m sure it’s out there.  I just can’t see it.  Yet.  Winter is starting to seem long and slow, stretching into forever. 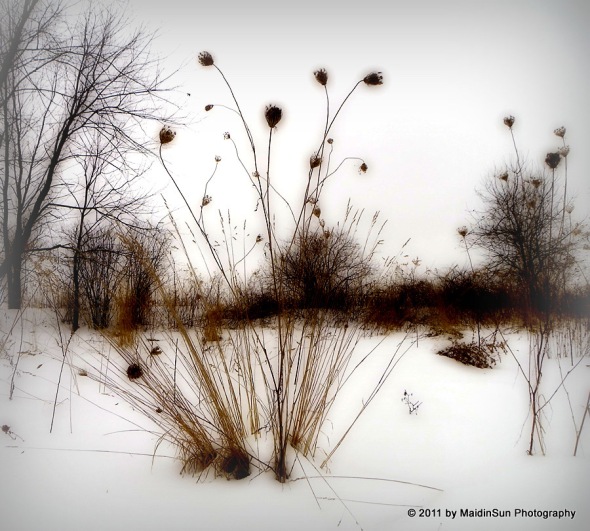 Of course that isn’t true.  Spring will arrive eventually, followed by summer, autumn, and another winter.  That’s how the wheel turns.  But winter has a way of making it feel like the wheel has paused.

One of my resolutions this year is to include more music in my life.  To sing, to dance, to listen.  I have been turning on the radio every day while I exercise or clean.  Or I go to blip.fm if I’m in the mood to make my own playlist or listen to something specific while I’m at the computer.  Or I visit Radio WTH for a dose of “Just Damn Good Music.”

Today as I was dusting (somebody’s gotta do it) it occurred to me that M and I have a mighty fine music collection of our own that I could be listening to.  While we do have plenty of vinyl (and a turntable to play it on), I decided to start with the CD’s.  I realize CD’s seem to be almost as obsolete as vinyl now that most people have some version of an MP3 player, but our CD collection is fairly up-to-date within our range of likes.  However, being a pretty extensive hodgepodge of music, pulling one at random meant a blast from the past. 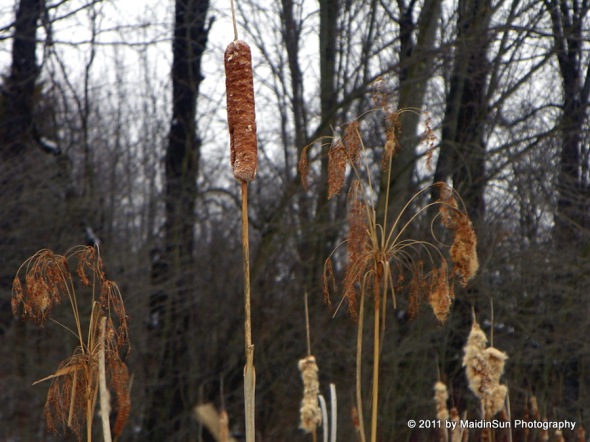 M and I went to Quail Hollow State Park yesterday for an hour of cross-country skiing.  The trails were a little slick.  Not really icy, but with hikers having packed down the snow by walking all over the ski tracks, our skis would slide all over the place in spots.  Most spots.  It wasn’t comfortable skiing, especially when the legs slide in different directions.

(In the woods at Quail Hollow.)

We haven’t seen the sun since the weekend.  It has been dark gray and gloomy.  The snow had taken on some of the grayness but we’re getting a fresh coating today which has brightened it up. 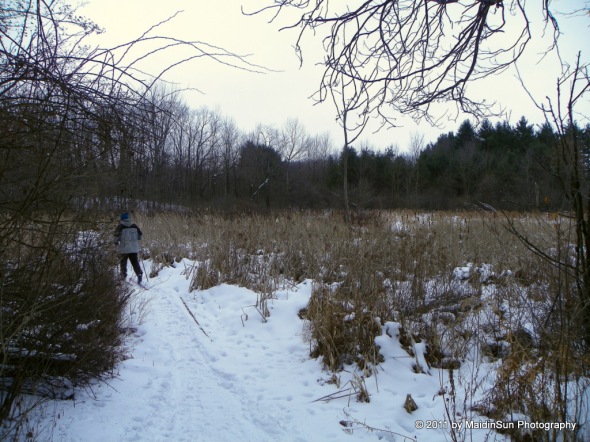 I’m heading out in a few minutes to do some skiing around Breezy Acres.  I need the practice, and that will help me meet my outdoor commitment for today.  Even when it’s gray and gloomy, I gotta get out there.