Another gray, snowy day here in the Bogs.  I didn’t wander far when I went out.  I fed the birds.  Watched our two red-tailed hawks as they watched the birds at the feeders.  The hawks have been swooping down, attempting to feast on a bird or two, birds we have lured in with food.  As far as I can tell, the hawks have not yet been successful in their attempts.

I took a few photos but don’t want to post them.  I’m not in the mood to look at snow and gray skies. 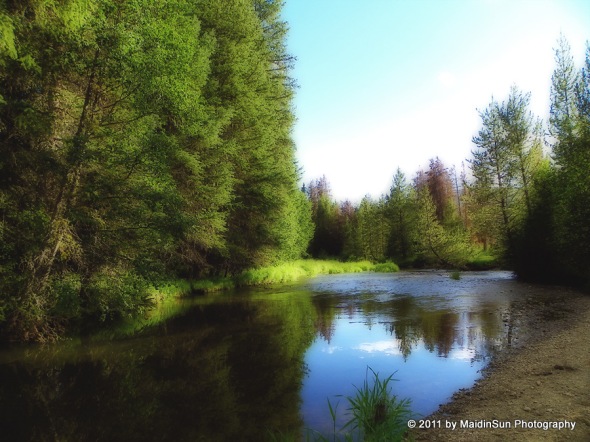 Instead, I’ve been sorting through the Colorado pics from last August.  I would like to get prints made of some of them.  It’s just a matter of picking out a few and that means going through them, one by one.  Since I mentioned the Colorado River in Friday’s placeholder post, without showing it to you, I thought it only fair that you get a chance to look at it in photos and not just in the imagination.

(Cloud and grass reflections on the Colorado.)

A river seems a magic thing.  A magic, moving, living part of the very earth itself — for it is from the soil, both from its depth and from it surface, that a river has its beginning.

(Fly fishing in the Colorado.)

By the time it came to the edge of the Forest, the stream had grown up, so that it was almost a river, and, being grown-up, it did not run and jump and sparkle along as it used to do when it was younger, but moved slowly.  For it knew now where it was going, and it said to itself, ‘There is no hurry.  We shall get there some day.’

~ Benjamin Hoff, The Tao of Pooh

The Colorado River is 1,450 miles long and originates at La Poudre Pass Lake on the Continental Divide in Rocky Mountain National Park. 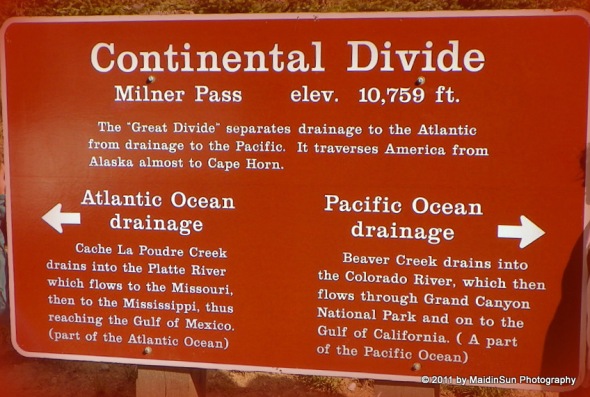 (At the Continental Divide.  RMNP.  Colorado.) 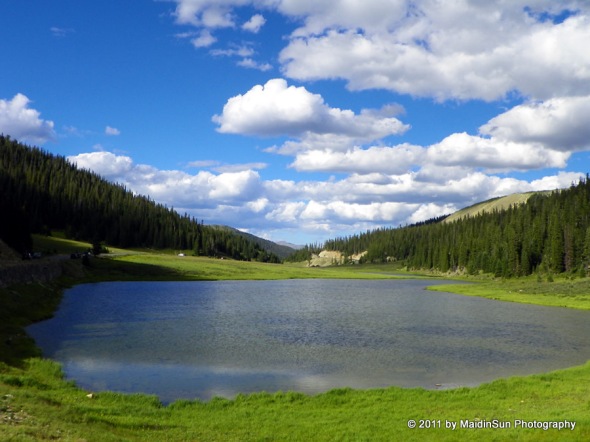 The photos of the river, above and below, were taken in Kawuneeche Valley, about 10 miles from the river’s source. 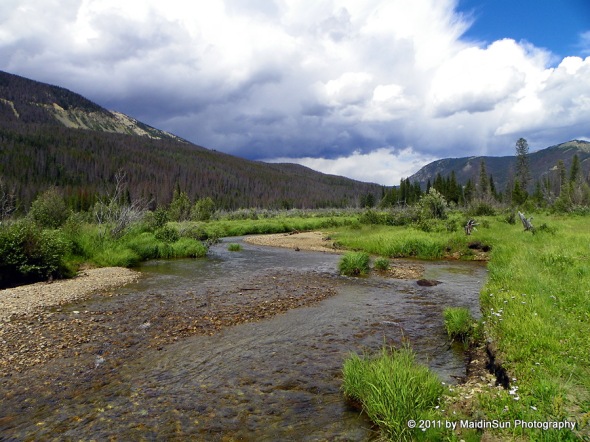 The weather here in the Bogs is going to be about the same tomorrow, only colder.  By Wednesday we might see some sunshine and I’ll be ready/willing to post photos from my daily outdoor excursions.  In the meantime, isn’t it nice to see so much color?

The Black Keys are a couple of local guys, from Akron, Ohio, who play some bluesy, raw, garage-band rock.  I’m hoping to see them in concert someday (they are always sold out around here before we can get tickets).  I don’t have their newest album yet, but you can hear some of the songs from it here.  (“Howlin’ For You” is one of my faves.)

Pikes Peak and the Garden of the Gods

The Cog Railway ride up to the top of Pikes Peak was fun and amazing.  Pikes Peak is 14,110 feet above sea level and maybe it’s just me but there doesn’t seem to be a lot of oxygen up there.  Being at the top of Pikes Peak gave me a real appreciation for the reality of a rocky mountain high.  We were all a bit lightheaded.

I’m not sure the weather would be described as perfect, but it was close.  We were above the clouds and experiencing sunny weather at the top of the mountain.  It was a little chilly.  Hot chocolate and some of the donuts they serve at the visitors center warmed us up nicely.  It also took the edge off the lightheadedness (plain and simple water will do the trick too).  The donuts made and served at the visitors center are smaller and denser than what you usually find at lower altitudes.  We all agreed they were perfect.

Next weekend is the Pikes Peak Marathon when those in fantastic shape make the 26-mile round trip foot race up Barr Trail to the top and then back down again.  I mention this because some of the athletes planning to participate were training/acclimating today and we saw more than a few making their way to the top on foot when we stepped off the train that brought us up without any effort on our part other than to get up early and get on the train.  I can’t imagine what it’s like to run up and then back down that trail.  I’m not even sure I could walk it.

I have more photos to share when I get home and have time to sort through them.  The Pike’s Peak Cog Railway has been in business since 1891 (under various names and ownership).  It was a fascinating trip up with our guide filling us in on some of the history and Pikes Peak facts.  One of the most interesting aspects was something not included in the standard tour.  Our daughter-in-law noticed an area by the tracks near the top that looked like a grave.  On the ride down the guide comes around to answer any questions people might have so we asked about the possible grave site.  It is not a grave but a memorial to a couple who froze to death in 1911.  They were hiking to the top when the weather changed.  The train stopped for them, the conductor telling them they better get on.  They refused.  A few days later they were found buried under three feet of snow, dead.

Or so we were told.  I haven’t been able to check out the information.  It’s a good story, though.

Our trip to the top and back ended around 12:30pm so we set out to find some lunch.  We ended up at the Phantom Canyon Brewing Company in downtown Colorado Springs.  The food and beer were excellent as was the service.  I had the Peanut Crusted Tofu salad with sweet chile soba noodles, edamame, and pickled ginger.  Mmmm, good!

We went out to the Garden of the Gods after lunch.  I wanted to see the red rock formations.  I enjoyed our short hike around a small portion of the park.  M and I are planning to go back early tomorrow morning.  It might be interesting to see the rocks at or near sunrise.

There were several people out there doing some serious climbing on the rocks.  There were also several people out there who were allowing their children to do some serious climbing without the benefit of safety equipment or permits merely for the sake of taking a few pictures in spite of the fact that climbing is not allowed without a permit or proper safety equipment since there have been serious injuries as well as fatalities in the park as a result of inexperienced or unprepared climbing.  I suppose the parents ought to be considered as candidates for the Darwin Awards.

If I lived near the Garden of the Gods, I think I’d be out there throughout the various seasons and times of day just to watch the light play on the rock formations.  I’ve never seen anything like it before (other than in pictures or on television).

There have been a lot of new experiences throughout our trip so far.  Traveling can provide a great education is you’re open to it.

I’ll leave you with a photo from our time in Rocky Mountain National Park of the Colorado River (just because it’s pretty and it’s been uploaded).  It’s time for me to get ready for some serious hiking, starting with a good night’s sleep.  Today will be pretty full with a quick early morning visit to the Garden of the Gods, then a hike in a nearby canyon to see some waterfalls, and then a prairie hike.  After that we head back to the Boulder area for the rest of the trip so we can spend more time with M the Younger and Merdi.