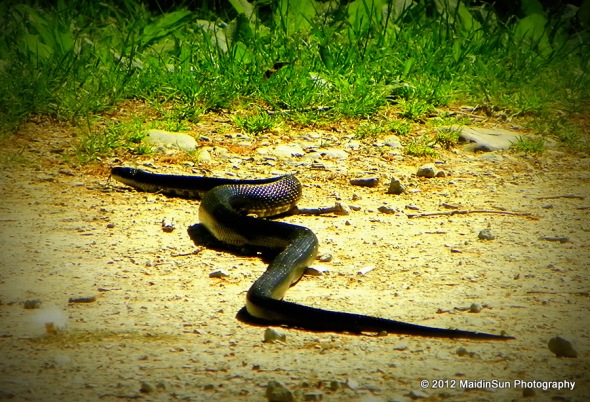 I wonder if this snake speaks Parseltongue?*

I arrived late to the Harry Potter party.  I read the first book or two when they first came out.  M the Younger (aka Youngest Son) “outgrew” the books at that point, and since he gave up on them, so did I.  I’m not quite sure why as I’ve never been one to refrain from reading a book simply because it was meant for children.  Some of my favorite books are meant for children.  The Secret Garden.  The Phantom Tollbooth.  The Graveyard Book (the one book review I’ve done here at Ye Olde Blogge, but stay tuned — another one is coming up soon).

*If you’re unfamiliar with Harry Potter, find out more about Parseltongue here.  The snake, by the way, is a black rat snake we saw on one of the trails at the Holden Arboretum during our hike yesterday.  Isn’t he beautiful?

END_OF_DOCUMENT_TOKEN_TO_BE_REPLACED 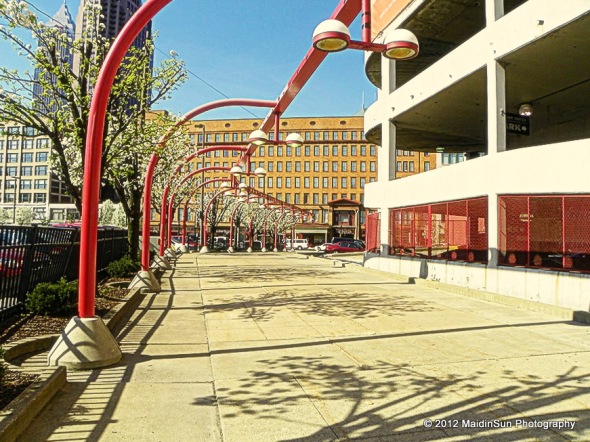 Walking from the hotel to Tower City (where the CIFF is held).

What an amazing weekend it has been.  There are so many things to tell you about that I think it will take at least a week.  I feel so saturated with life and art and the city of Cleveland that I don’t know where to begin.

END_OF_DOCUMENT_TOKEN_TO_BE_REPLACED 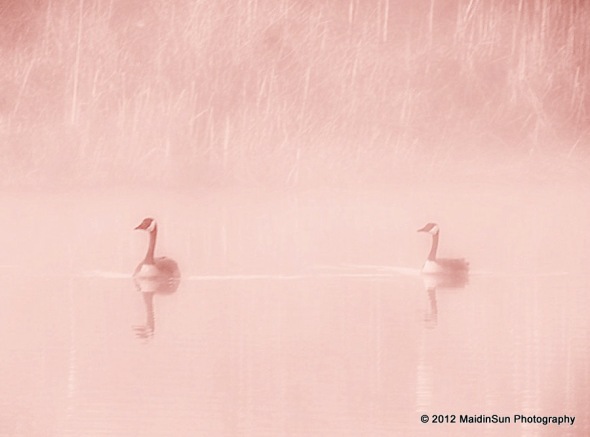 This morning's view of the pond

I am off on an entertainment adventure, another artist’s date.  I am not sure I’ll have time for blogging over the next couple of days so I’ve scheduled a couple of short posts to fill in for me.

END_OF_DOCUMENT_TOKEN_TO_BE_REPLACED 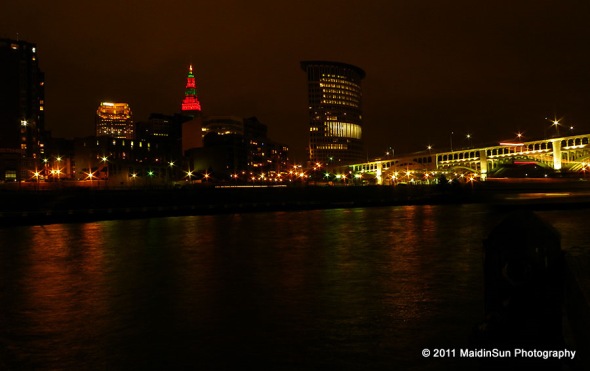 Cleveland and the Cuyahoga River at night.

Just for fun and giggles, M and I went to Cleveland last night.  We picked up M the Younger and Merdi on our way up and we all toured A Christmas Story House, had dinner at Sokolowskis, and took the Silver Bells Plus Tour on Lolly the Trolley.

END_OF_DOCUMENT_TOKEN_TO_BE_REPLACED 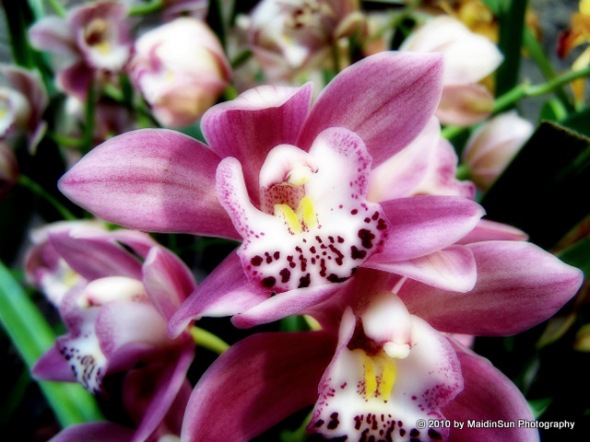 One way to open your eyes is to ask yourself, ‘What if I had never seen this before?  What if I knew I would never see it again?’

M and I watched the documentary Food, Inc. on PBS last night.  It was a good reminder of why we have been changing the way we eat as well as how and where we buy our food.  If you haven’t seen it, you can watch it at pbs.org until April 28th.

Garden notes:  This afternoon I planted a row of mixed lettuces.  I finished out the row with a few spinach seeds.  Harvested a whooping 6 (lol!) asparagus spears.  It’s a start. 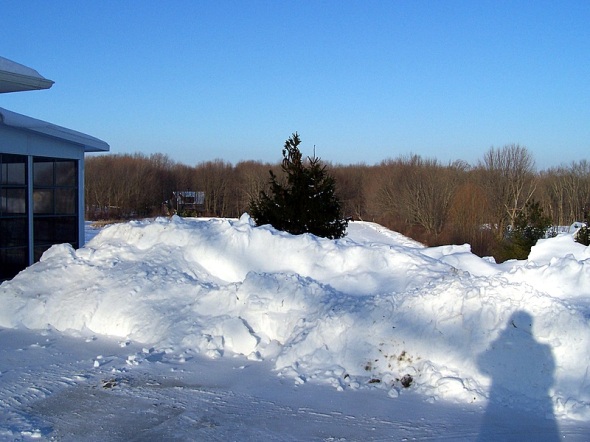 I think the general consensus is that we had somewhere between 22 and 40 inches of snow.  Depends on who you ask and where you go.  I think we have close to 30 inches out there, at least in spots. 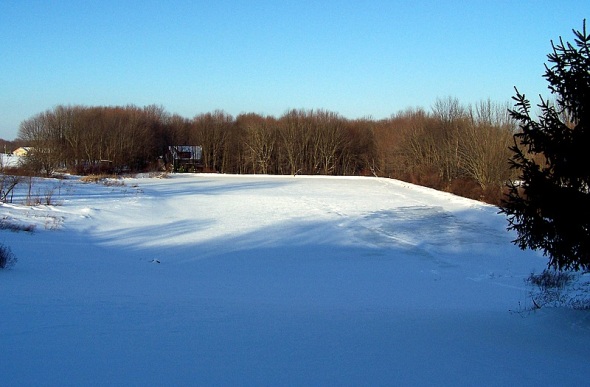 I climbed over the big pile of snow you see in the first photo to get a shot of the pond (because I’m sure you all are missing those almost daily shots of the pond).  Another few more inches of snow and it’ll be difficult to see where the pond is located.  It’ll all just blend together in a big sheet of white. 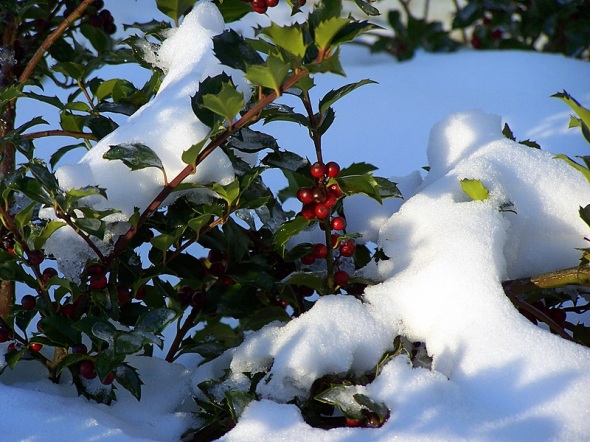 I had originally planned a walk around the property, or at least around the pond.  However, trudging through that much snow is one heck of a workout, even more so for someone that’s been sick almost all week.  I’ve been down and out with a cold.  Sore throat, sniffling, sneezing, coughing, the whole mess.  It seems to be peaking today.  Lots of sneezing going on.  Hopefully it will be nothing but improvement from here on out.

I caught the cold at the mall last weekend.  I went in search of a dress to wear to M the Younger’s wedding.  It’s a good thing I have until June to find one because my first outing didn’t result in success.  The only thing I brought home from the mall were the cold germs.  Bleh.

last night.  It’s a movie from 1999 starring Matt Damon and Ben Affleck.  They looked so young I thought it was older than 1999.  Then again, that’s a decade ago, isn’t it?  Strange how fast time goes by.

Anyway, back to the movie.  It’s an irreverant look at religion and the whole good vs. evil thing.  I enjoyed it and thought it was funny for the most part but, like a lot of comedies, doesn’t seem to know how and when to end.  That’s not to say it dragged.  It’s just an observation on comedies.  They tend to start out well and then just sort of… well… fade out.  I’m not sure why that is.  Perhaps the joke(s) get old after a while.

At any rate, I’d highly recommend it in spite of what I just said.  It was good entertainment.  Unless, of course, you’re easily offended by satire concerning religion.  If that’s the case, don’t bother.

.  We’ll be starting disc 3 this week.  Most of the reviews I’ve read describe it as inaccurate, but dazzingly beautiful.  That sums it up quite well.  I enjoy this kind of period piece and think the costumes and settings are great.  Whether or not they’re accurate, I have no idea.  I’m in it purely for the entertainment value.

The next and last New York post is coming soon. Later today, maybe.

In the meantime, we have nuns in town:

A movie is being filmed in Sabbaticalville. They shut off a few streets here and there over the past few months, but the big shooting must be going on now. The building across the street from us (pictured above) is empty and now being used to house the wardrobe for the movie.

M noticed the film people last night when he went out for an evening stroll. He saw some of the crew pushing the wardrobe carts down the street. We watched them from up here for a little while before going to bed last night.

The film is called “Our Lady of Victory.” If you’re interested in being in the movie, get yourself to West Chester University this weekend. Wear 70’s attire if you have it.

There was also some road work going on last night.

It was pretty amazing how quickly they stripped the old part of the road and cleaned up the mess. I think that’s the first time I’ve ever really watched workers repair a road.

The guy directing traffic was kept pretty busy as there was a lot of traffic for so late in the evening. I don’t know if that was due to the filming or not.

I’ll be back later with the last New York post.