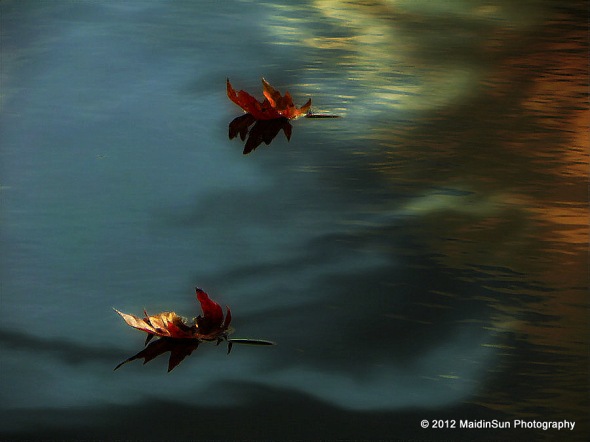 A lake is the landscape’s most beautiful and expressive feature.  It is earth’s eye; looking into which the beholder measures the depth of his own nature.

If you live in northeast Ohio and you’re a fan of Quail Hollow State Park, please read on.

END_OF_DOCUMENT_TOKEN_TO_BE_REPLACED

When I woke up this morning my thoughts were about spring.  The reality was frost and ice.  It had gotten down into the 20’s overnight and there was a sparkly layer of frost coating everything.  Had the rain not melted most of the snow, we might have had another round of hoar frost.

As I stood at the window sipping on my cup of tea, it occurred to me that the scene I was looking at was very similar to how it looked in the late autumn when frost began to appear in the mornings on a regular basis.  Winter is reversing itself.  We started frosty in November and we’ll probably end frosty.  I’m not sure when that will be, though.

(An autumn leaf frozen in time.)

I had a nice walk this afternoon.  The sun is shining, and it feels relatively warm (almost 40 degrees).  I didn’t take many photos.  I meandered around the property with no particular destination in mind.  I eventually circled back around to the front of the house to check on the flowers.  I wanted to see if they’d opened their little heads yet. 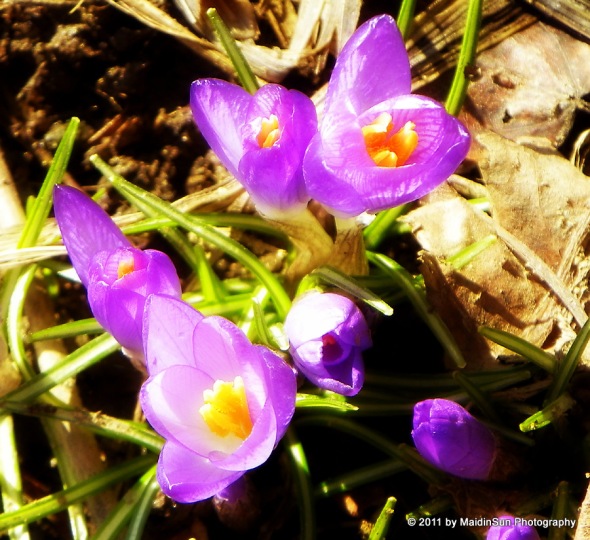 Aren’t they gorgeous?  I think they may well be the most beautiful flowers I’ve ever seen.  They look like warmth, springtime, and hope.

What’s new in the Bogs

Well, that’s about it from the Bogs for today.  I’ll have some slightly more exciting news soon.  Or at least something different to write about.  I hope. 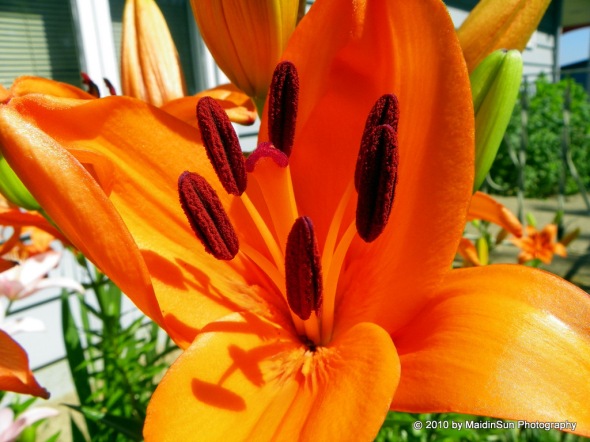 Is it just me or does soccer (as we call it here in the U.S.; football to the rest of the world) seem even more exciting when the announcers are speaking in Spanish?  As some of my regular visitors may recall, M and I do not subscribe to cable television services.  Cable internet, yes.  Cable television, no.  We don’t watch enough television to make it worth our while or money.  Having cable might get us into the bad habit of watching enough (or too much).  The bonus to not having cable is that when there is a high-profile sporting event that M wants to watch, we go out and watch it in a local bar or pub with a bunch of other people (usually strangers) which makes it much more fun.

The only sporting event that I follow is the World Cup.  We don’t need cable television service for that as we can pick up Univision over the air.  I do not speak Spanish or understand more than a few words here and there.  Every four years I keep thinking some of the language might sink in as I watch the football/soccer games on Univision.  So far, no luck.  That makes it a little difficult when calls are made and I can’t understand what the announcer is saying.  That happened to me yesterday while watching Slovenia vs. USA and they didn’t count one of the goals.  I had to get online when the game ended and look it up.  But it always sounds so exciting compared to the American and British announcers on ESPN (who sometimes sound as though they’re watching golf instead of soccer/football).  And when the announcer yells GOOOOAAAALLLL!!!!! it’s pretty darn amazing.  That guy must have an incredible set of lungs.

The plan for today, if all goes well, is to go strawberry picking at Hilgert’s this afternoon and then it’s off to Blossom for A Prairie Home Companion with friends.  We’ll be picnicking and sitting on the lawn this year.  No VIP tickets as we did in 2008.  That’s okay.  I like sitting on the lawn.  It’s live radio.  I don’t need to see what’s going on (although it was fascinating to be able to watch it from front row seats and I’m glad I got the chance to do so). 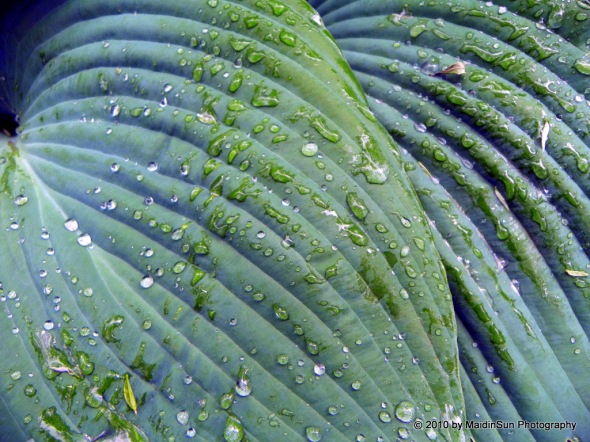 We’re having a long rainy season here in the Bogs of Ohio this year.  The weather has been quite warm and, even when it’s not raining, humid.  The plants and flowers are loving it thus far.  So are the weeds in my garden which are once again running riot and throwing parties out there by blossoming.  I would show you some pictures of my pretty weeds but I haven’t been able to get into the garden with all this rain.  Not that I would melt or anything.  Somewhere I read that it isn’t a good idea to walk around in your garden when it’s soaking wet.

(Any excuse to avoid the weeding, eh?)

The ducks, the frogs, and the turtles all seem to be enjoying the rain, too.  Speaking of frogs!  That reminds me that I have a photo I want to show you.  M made a toad house and put it in one of the flower beds.  Someone finally moved in:

I don’t know if you can see him (or her) very well.  I was trying not to disturb the toad too much as we were hoping someone would take up residence there and stay a while.  Toads eat slugs and grubs and insects.  They are good to have around for pest control.

The rain we’ve had this spring is sometimes accompanied by gusty winds, lightning, and thunder.  It’s not been an easy season in Ohio in terms of flooding, tornadoes, and lightning strikes occasionally setting churches on fire.  The latest incident involves a giant Jesus statue being struck by lightning.

When we returned home after our trip to Colorado, the sunflowers were blooming in all their bright and shining glory.  I don’t think I’ll be taking as many photos of them this year as I did last year (unless I can find a new way to approach them).  What that likely means is I’ll take a hundred or so instead of two hundred or so.

The weather has been unusually cool.  It feels more like late October than September.  It’s supposed to warm up later in the week.

I haven’t been out to the garden since we returned home.  I have no idea what’s happening out there.  Perhaps I’ll hobble out there sometime today.  I’m sort of back to square one with the back and hip pain, and having trouble moving and walking.

My mother is back in the hospital.  She fell and broke her hip.  Things are not going well for her right now.  All thoughts, prayers, and good wishes will be greatly appreciated.  She’s going into surgery this afternoon.

I started posting at Bountiful Healing again.  I need to be back in that space right now.

And that, folks, is about it from the Bogs.  If anything interesting happens, I’ll be sure to let you know.

P.S.  The Flying Pig Saga continues and ends in the post below this one.

Have you seen the latest in weight loss news?  Here, go have a look:  Study finds calories count more.

Imagine getting funding ($$) to come to a conclusion that most of us came to a long time ago via the method of common sense.  Calories in, calories out.  If you take in more calories than you burn, you’ll gain weight.  Logic, reason, and yes, common sense, should tell you that if you burn more than you take in, you’ll lose weight.

I wonder how much money the folks from Harvard and Pennington got to conduct the study.

All snarkiness aside, I realize this puts to rest the “my diet is better than your diet” arguments.  Bring on your Atkins, your Weight Watchers, your South Beach, and your Cabbage Soup diets.  It doesn’t matter as long as more calories are going out than going in.  But don’t starve yourself because that will slow down your metabolism.

I was going through some old (paper) files the other day and came across the U.S. Women’s Ski Team Diet from back in the 70’s.  The claim is that you will lose 20 lbs. in 2 weeks.  I don’t recall losing 20 lbs. in 2 weeks, but do remember giving it a try.  I found it online for those who don’t remember it or wish to see it.  It’s here, but you’ll have to scroll down a little to  read it.

I spent a lot of time dieting my way to weight gain when I was a perfectly respectable and healthy weight.  The U.S. Women’s Ski Team Diet was probably part of that effort.  Thankfully I’m a little more sensible these days.  But I still get drawn in, at least for a look, when someone announces the newest, bestest, guaranteed to work, lose weight quickly, diet.  Although I know there is no magic diet or magic bullet, part of me still holds out hope that the next big diet will be The One.

In the meantime, I’ll keep eating healthy foods, exercising, and making sure that the calories consumed are less than the calories burned.  It’s not magic, it’s not faddish, it’s not terribly exciting, but it works.

(In the front yard.)

The sun is shining and it’s snowing like crazy at the moment.  The snowflakes look like glitter falling from the sky.  Perhaps Mother Nature is celebrating along with many of us today.

What an amazing day, eh?