← Sunday Signage
This, that, and the other thing →

You can’t possibly ask me to go without having some dinner.  It’s absurd.  I never go without my dinner.  No one ever does, except vegetarians and people like that.

~ Oscar Wilde, The Importance of Being Earnest

Oscar Wilde wasn’t quite right.  Vegetarians (and people like that) don’t go without their dinners either (most of the time), but I imagine some people don’t consider a vegetarian meal a true meal in and of itself (and would probably walk away from the table hungry because they don’t consider it a true meal).  The other thing he didn’t mention is that some vegetarians forget all about photographing their meals and find themselves nearly finished eating before they do remember.  Ooops.  Too late. 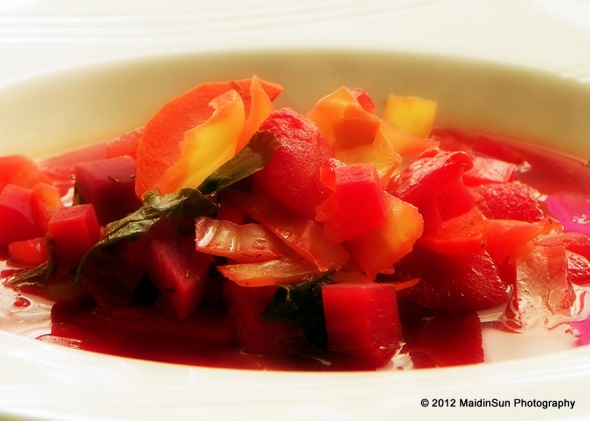 Karma’s challenge (which she called a blog-along, but it turned out to be a challenge for me) was to take pictures of dinner for a week and present them in a blog post.  Well.  It has been a while since I’ve practiced my food photography.  I realized early in (the first photo in this post) that this was not going to be very pretty.  Food photography requires scads of light.  Much more light than I can get in my kitchen at dinner time during the winter season.  Natural light, I’ve found, is the best for food.  Morning sunlight coming in through the kitchen window is the best of all.  But who eats dinner in the morning?  (I do.  Sometimes.  But we call it breakfast.)

I have a blog category labeled “Mindfulness.”  I am thinking about adding one labeled “Unmindfulness.”  The light was not my only challenge.  As mentioned at the beginning of this post, I would frequently forget to photograph my food.  I wonder, now, if that wasn’t intentional.  The food M and I eat this time of year can look pretty blah.  That’s especially true of our New Year’s Day dinner.  The Field Roast was pretty enough, but everything else was in the white category.  An image of small piles of white food on a white plate is not drool-worthy, I can tell you that.  Here, have a look:

My doctor told me to stop having intimate dinners for four.  Unless there are three other people. 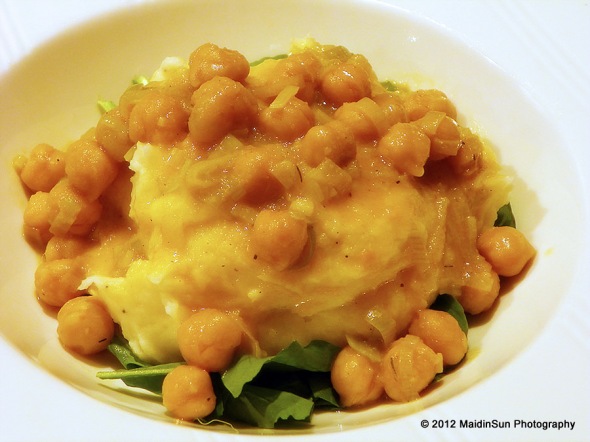 See what I mean about white foods?  Chickpeas.  Potatoes.  Wine, capers (if you follow the recipe which I don’t because I don’t like capers), and lemon sauce.  At least some of the greenery (the arugula) is evident.  (If you want to see chickpea piccata  photographed right, this is the place.  You’ll find the recipe there, too.)

Look at that!  More white food.  More potatoes.  I have to laugh.  The things not photographed were much more colorful.  Roasted broccoli.  Salads made with a variety of greens.  Oranges.  Lemons.  Pizza!  The pizza puzzles me.  I know I took a photo of it.  Santa brought M a bread/pizza stone for the oven, and he’s made pizza twice since Karma made the announcement regarding this dinner challenge.  It was not only mighty tasty, it was mighty photo-worthy.

I found it.  Now I see why it was hidden.  It looked prettier than that in real life.

Caldo Verde (a vegan version made with tempeh)

Caldo Verde and Chickpea Piccata are, for those who might want to know, the new comfort foods for me.  I especially like them on a cold, wintry day.  They are warming and, yes, comforting.  The recipe for the vegan version of Caldo Verde that I use is from the book Appetite for Reduction: 125 Fast and Filling Low-Fat Vegan Recipes

.  (You can find some of the recipes from the book (and more!) at The Post Punk Kitchen.)

Since I did keep forgetting to photograph the food over the course of one week, these dishes were made over the course of the past two weeks.  One of the great things about Karma’s challenges is that she’s always willing to bend the rules. 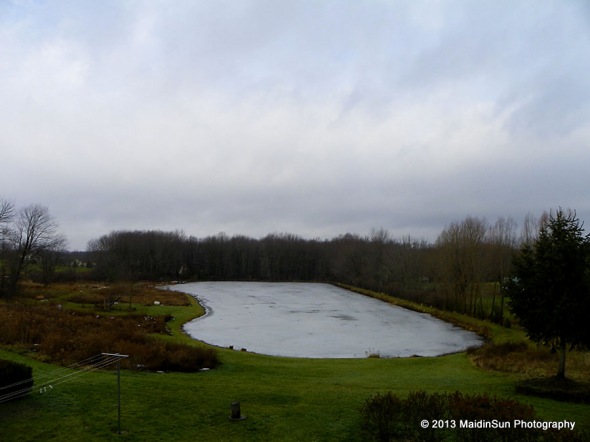 Today’s view of the pond. The snow is mostly gone. The surface of the pond is still pretty solid (we saw a cat crossing it this evening and the cat did not fall in), and yes, the grass remains green like that all year round.

That should do it for the dinner challenge.  Thank you for joining me.  I wish the food had been a little prettier, but it’s good, honest, and delicious food.  There’s something to be said for that.  Tonight’s dinner, by the way, are burritos from Taco Tonto’s.  Yummy! 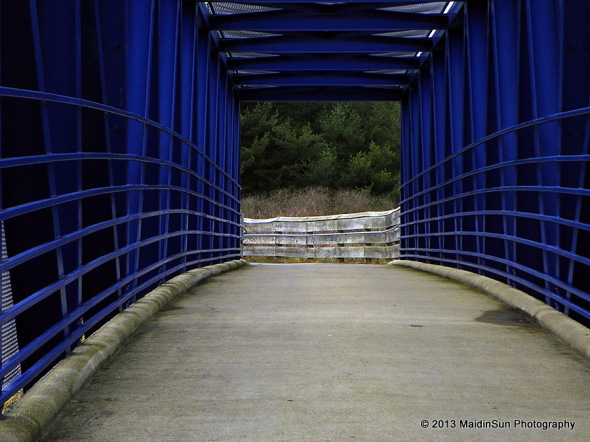 Crossing over the highway

The weather was amazing today.  M opened the back door this morning and said, “Welcome to April!”  That’s how it felt.  It was mostly cloudy with the occasional sunny spells.  We went for a walk over in Kent where the trail is paved.  It’s too muddy to be out in the woods or on other dirt trails.

I hope you’re having a delightful day, evening, or night… wherever and whenever you are on the spectrum of time.  🙂