← Wolf Dreams
At the center of your being → 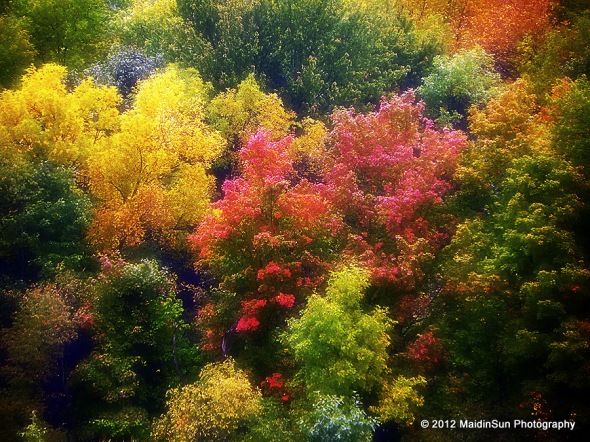 Changing of the guard

There is a beautiful spirit breathing now
Its mellowed richness on the clustered trees,
And, from a beaker full of richest dyes,
Pouring new glory on the autumn woods,
And dipping in warm light the pillared clouds.
…

Yesterday evening, M and I were talking about going up to the Holden Arboretum some weekend to have a look at the trees and the fall colors.  M seemed to think this weekend is too early.  All the fall foliage maps are showing the colors will peak in a couple of weeks.

I reminded M that last year we arrived a little too late, and that this year everything has arrived a few weeks earlier than normally expected.  A lot of the tips of the leaves around here have already been touched with autumn’s paint brush, and I figure that in another few days, the foliage ought to be looking pretty colorful.  Besides, I don’t want to go to the arboretum next weekend.  They’re having a Halloween type thing and that will likely bring in lots of families with children.  Not that I have anything against families with children.  I have a family and there are children (my grandchildren).  But it will be crowded and that’s never a good time to try to take peaceful photos of the fall foliage although it’s not impossible (just hike deep into the woods — it’s usually not crowded out there).  The weekend after that, well, will probably be too late.

I went out for my walk this morning and was surprised by the amount of color.  Even though I was arguing in favor of early color, I truly wasn’t expecting to see so much. 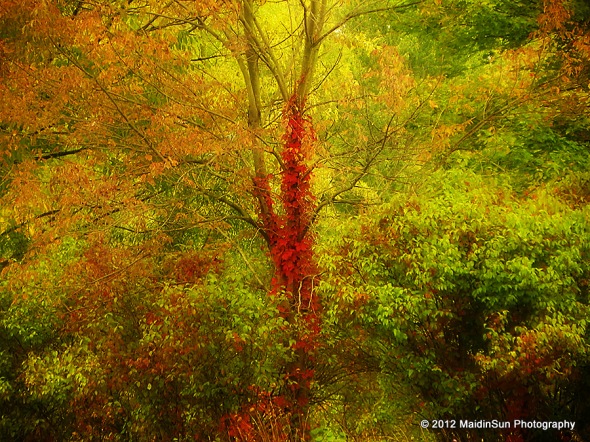 It must have happened overnight.

It’s been raining for the past few days.  I really didn’t pay much attention to the colors yesterday, but I’m pretty sure they were not as widespread and vivid as they are today.  I’d show you what I mean, but I don’t have the pictures to prove it.  I took a few shots of the wind in the willows and left it at that.  I was having one of those day when I didn’t want to be bothered with the camera or sorting through photos. 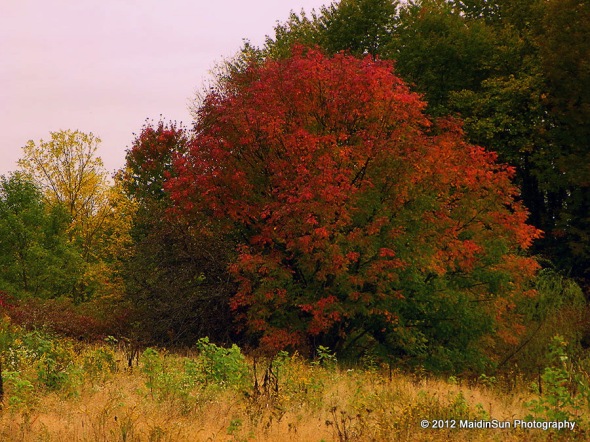 Today is a different story.  After seeing so much color had appeared overnight, I wanted to patrol the neighborhood, camera in hand, to see what Mother Nature had done while I was sleeping.  The first four photos are of the neighbor’s woods.  The rest are from around the pond.

This scene with the dogwood is always my favorite this time of year. It almost takes my breath away when I see it (in person, not through the camera). A whisper of wind and this scene will change quickly. It’s already changed since I was out there this morning.

I know I usually bring you travel photos on Thursdays, but time is fleeting and so are the autumn colors.  I can always dip back into the summer travel photos once we arrive at the doldrums of late autumn, before the snow arrives.

That’s it from the Bogs for today.  Thank you so much for dropping by and exploring the colors with me.  Unless the winds pick up (not forecasted, but you never know), we should have another week or two of good color.  Maybe longer.  We had some early leaf drop due to the dry conditions over the summer so… who knows?  Best to get out and about and enjoy it while you know it’s there rather than wait for some future date that might be too late for one reason or another.

The dogwood is on fire this year!

Wishing you a sweet and colorful day, evening, night… wherever and whenever you are on the spectrum of time.

51 Comments on “It happened overnight”