For her August photo hunt, Karma asks us to show her the “end of the earth” or what we think of as the end of the earth.  I know some of you have seen the above photo in the past, but I hauled it out again because to me, this truly was the first time I looked at a scene as the end of the earth.  It is a place where earth and sky meet, and although I know you can go much higher than this and still remain on earth, it was the highest I’ve ever been and still had my feet firmly placed on terra firma.  (Well, maybe not as firmly as I’d like to think since the Rocky Mountain high due to altitude was making me feel lightheaded and floaty.)

You still have time to participate in the photo hunt.  The deadline is Friday, August 31.  Just follow the link provided at the beginning of my first sentence. 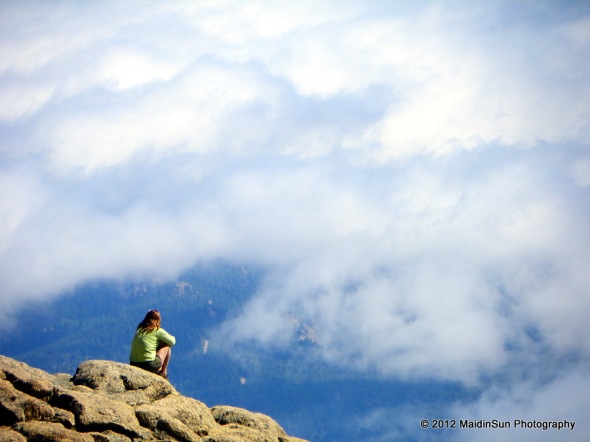 Only those who will risk going too far can possibly find out how far they can go.

Karma mentioned that due to the nature of this assignment, using archived photos is okay.  (Karma is not a stickler for the rules anyhow.  She’s good that way.)  I picked out more than a few from my travels to the Canadian Maritimes because where earth and water meet also feels like the “end of the earth” to me.

The Cabot Trail in the Cape Breton Highlands of Nova Scotia makes you feel, at times, as if you’ve reached the end of the earth.  It reminded me a lot of the Big Sur Coast Highway in California in the U.S.

Without the  redwood trees, of course.

One of my first views of South Harbour. Cape Breton, Nova Scotia.

The view above (and in the next few photos) is the view we had from the cabin we stayed at in Cape Breton.

Our first sunrise in Nova Scotia.

You may end up seeing similar scenes when I get to the Nova Scotia portion of our trip in my Thursday Travels posts.  The sunrises were amazing, and made me feel as though we were almost right there, at the end of the earth, watching for the light to come up over the watery horizon.

The grass at the bottom edge of the above photo is the end of the front yard of the cabin where we stayed.  It’s still part of our first Nova Scotia sunrise.  I took a lot of photos the first morning.

The strip of land you see is South Harbour Beach which looks out over the North Atlantic Ocean. 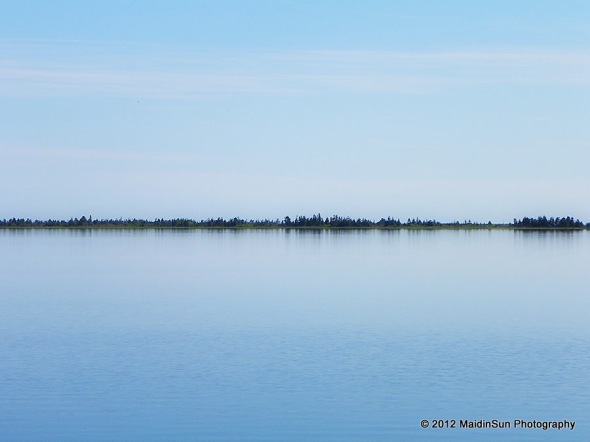 A view of South Harbour Beach from the cabin.

The grand show is eternal.  It is always sunrise somewhere; the dew is never all dried at once; a shower is forever falling; vapor is ever rising.  Eternal sunrise, eternal dawn and gloaming, on sea and continents and islands, each in its turn, as the round earth rolls. 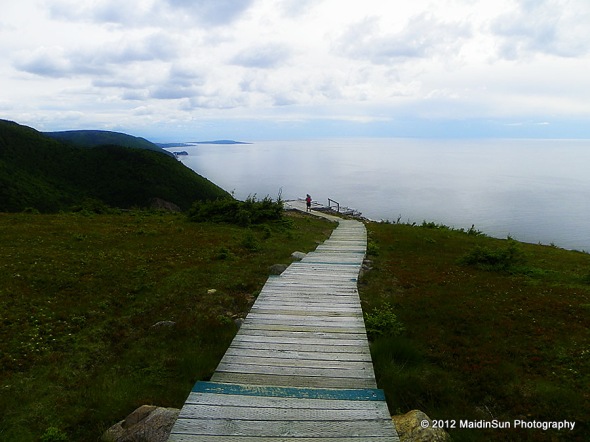 The Skyline Trail in the Cape Breton Highlands National Park is a popular trail, and one of the few where we encountered quite a few other people out hiking.  The trail takes you through forest, some of it damaged by a forest fire in the 1950s, and eventually leads to a boardwalk where you will find the most amazing views of the Cabot Trail and the Gulf of St. Lawrence and, although it’s not nearly as high as Pike’s Peak, you feel as if you’re standing at the end of the earth.

Standing near the end of the earth.

That was fun, Karma.  Thank you.

Today’s view of the pond.

Meanwhile, back at Breezy Acres, the rain cleared out sometime overnight.  We got a good soaking, but I was surprised to find the ground is still hard.  I can’t remember the last time it felt boggy.  Probably late winter, early spring.  I like the way the pond looks after the rain.  Clean, clear, very reflective.

That’s it from the Bogs (and elsewhere) for today.  Thank you for coming along on my interpretation of Karma’s photo hunt.  May you have a delightful day, evening, or night… wherever, whenever you are on the spectrum of space and time.  🙂

31 Comments on “Karma’s Photo Hunt: End of the earth”