← We have a deal
Thursday Travels: Mary’s Point →

Hitching post, standing stone, and stairs in the fog

The large print giveth, but the small print taketh away.

It’s been interesting times.  I brought some of the fog photos from Wednesday morning to show you while I tell you all about it.  Well, maybe not all about it.  Some about it.  I don’t think anybody wants to hear (read) all. 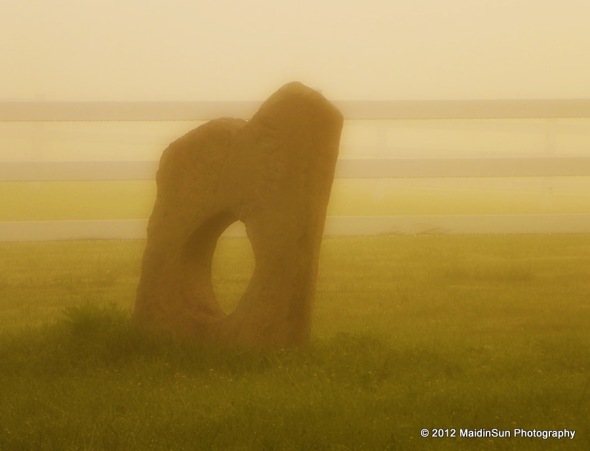 The other standing stone

Our good and faithful car was in an accident in Virginia two weeks ago.  A man who was not paying attention rear ended the poor vehicle while it was stopped in traffic.  We have had a rental car, from Virginia, for getting around in, but it’s a situation that we would prefer did not go on for much longer.  The hold up, of course, was the insurance company.  Not our insurance company.  The other guy’s insurance company.  They claimed they were unable to get in touch with their insured.  Funny thing is, we found him right away through a Google search.  He’s not a difficult guy to find.  He’s not a famous person, but he might work for one. 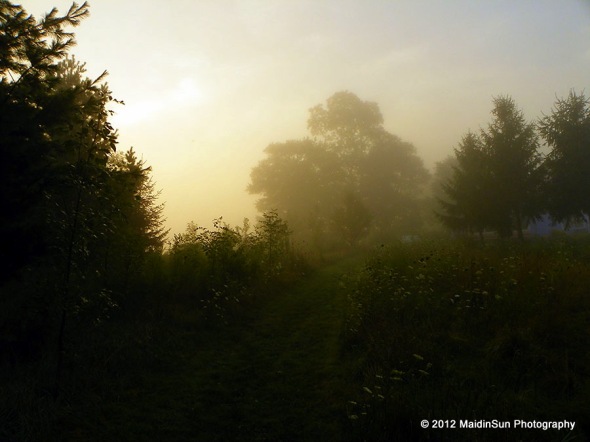 Looking up the sledding hill (towards the barn and house).

The other funny thing is that they were claiming they hadn’t talked with the person driving our car at the time of the accident, two days after they called her and she talked with them.  That’s the nifty thing about cell phones.  You can see who called, and how long you talked.  They had to come up with another story for the delay. 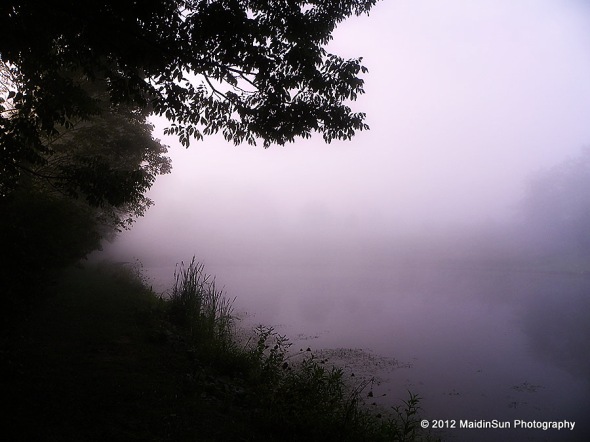 Walking along the edge of the pond

To make a long story relatively short, the other guy’s insurance has accepted liability.  Yay.  They have decided to total our car.  Not yay.  M and I both like that car.  It did not have a lot of mileage on it, it was reliable, I could watch the stars in the sky through the moon roof when I was riding in the car at night, it has heated seats (a very nice feature during our usually cold winters), and we owed nothing on it.  Paid in full.  Buying a new car is going to cost more than the insurance company is offering us right now. Boo, hiss. 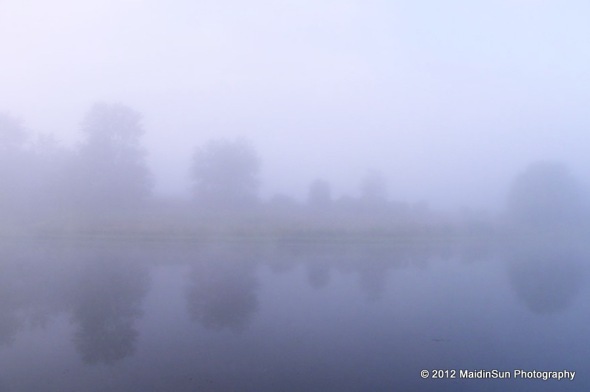 M and I keep reminding ourselves it’s just a car.  The important thing is that nobody was hurt, especially our loved ones who borrowed the car.  This is all very inconvenient, but it’s not life-threatening or earth-shattering.  It helps to occasionally put it in perspective. 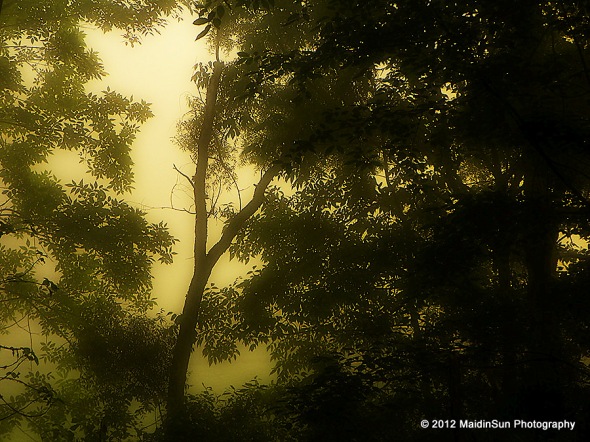 About the same time as the accident, our chest freezer decided to stop working properly.  M managed to fix that on his own, but had to order a part.  That took a couple of weeks to get here so I’ve been unable to freeze some of the harvest.  We’ve had to eat a lot of peppers and other vegetables so we wouldn’t have to throw them away.  That was really not a hardship. 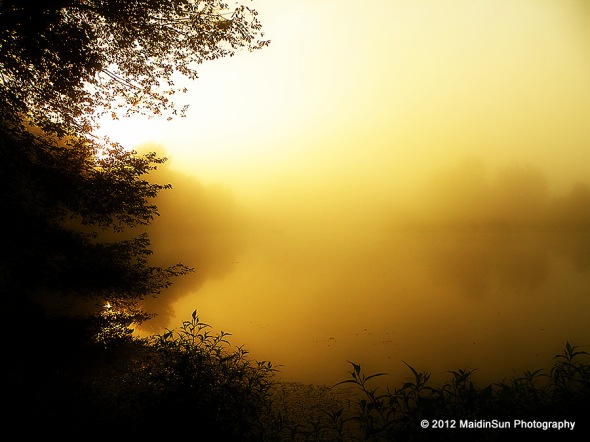 The fun doesn’t stop there.  We had a new problem with the air conditioning that involved water leaking into the basement.  Our handy guy came by and fixed it in no time so that’s all good now. 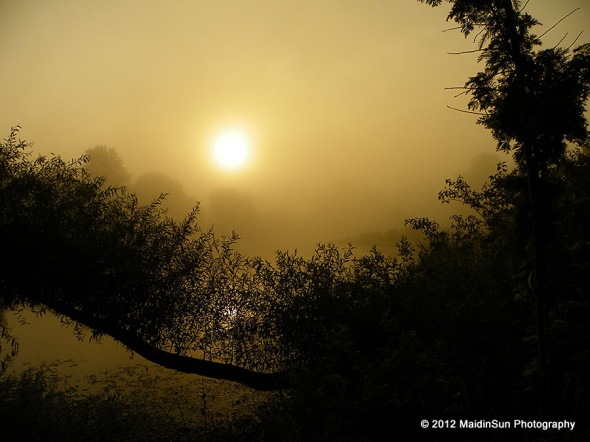 If I were the superstitious type and believed things come in threes, I’d be relieved right now, knowing that the three are over and none of those three things were terribly serious.  Yay. 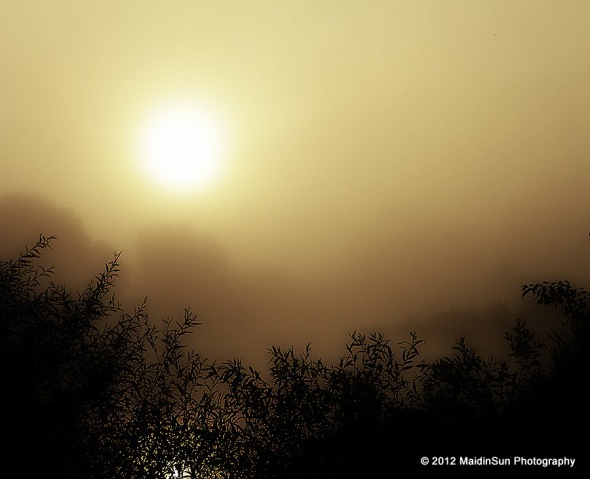 I’m guessing M and I are going to be pretty busy for the next few weeks.  We have to shop for a car, the harvest is coming in, our granddaughters and their parents will be coming to visit (a week from today), and we’re having our new porch built (a week from Monday).  Hopefully we’ll be able to fit some hiking and biking in there somewhere.  The biking will have to be nearby since we don’t have a means of transporting our bikes right now.  Well, other than riding them (or pushing them). 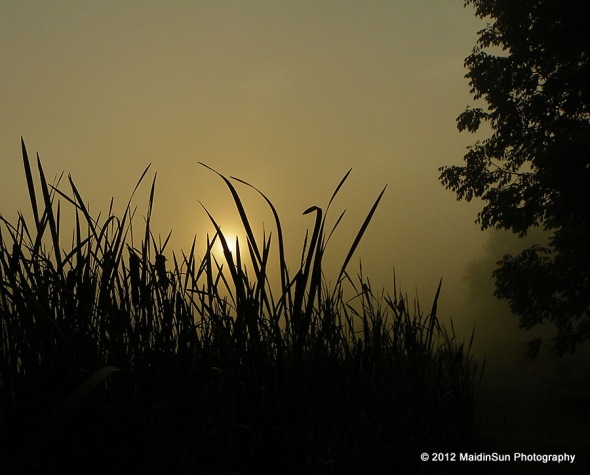 If you break your neck, if you have nothing to eat, if your house is on fire, then you got a problem.  Everything else is inconvenience. 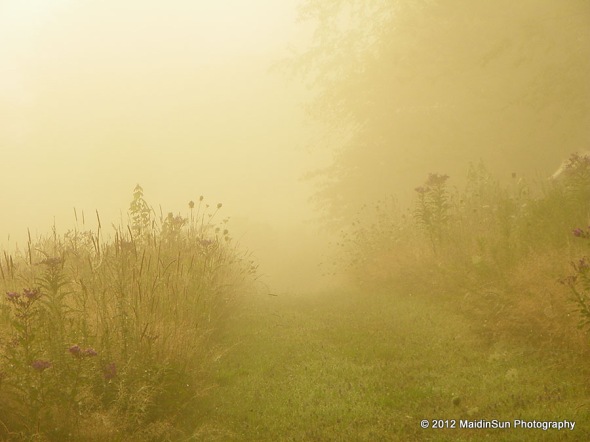 My Just Five Things project (which I promised I would update occasionally) has been going well.  I have several boxes of M the Younger’s stuff ready for storage (or for him to take with him if he can find space for it, but I suspect we’re going to continue to store it for now).  I have a couple more boxes of things ready for donation.  I should be able to start on my “art desk” area soon.  Yay. 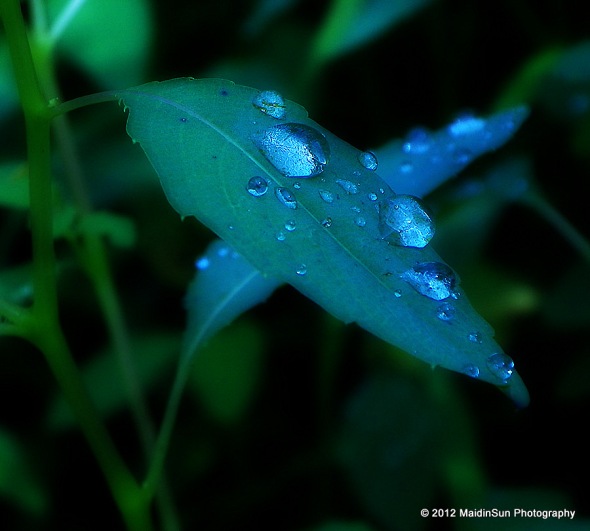 Raindrops on jewelweed. Taken this morning.

We had a lovely, gentle, steady rainfall this morning.  I wish it had lasted longer, but it’s enough so that we don’t have to water the garden ourselves.  I’m learning to be satisfied with enough. 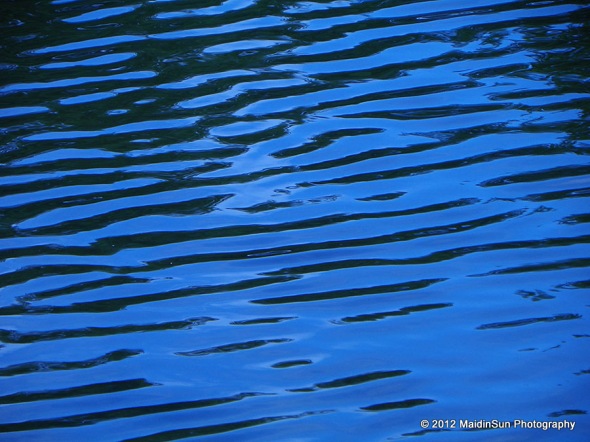 Wind rippling the surface of the pond. (Also from this morning’s walk.)

I think that pretty well sums up all the news from the Bogs for now.  Thank you for visiting and walking through Wednesday’s fog with me.  I hope this didn’t come off sounding too much like a whine and a moan.  Life good.  Life is enough.

Wishing you a wonder-filled day, a joyful evening, a peaceful night, and enough.  Just enough.  Have a great weekend! 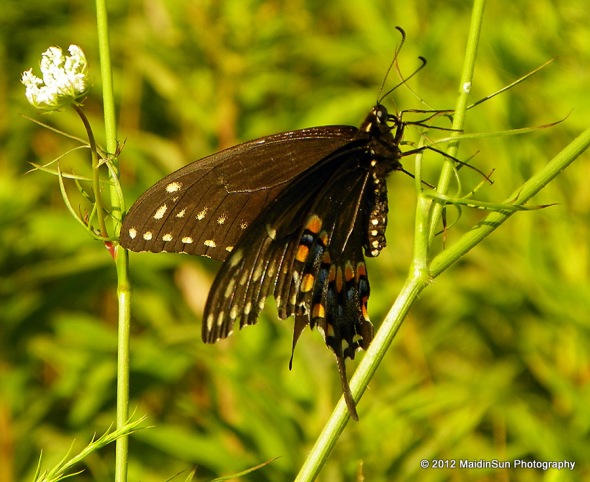 P.S.  A big thank you to Libby (who has another lovely blog here) for nominating me for the Reader Appreciation Award.  I am honored, AND I learned something new.  I’d never heard of Elfje.  I’m looking forward to giving it a try soon.