← Imagination and meditation
Quiet on the home front → 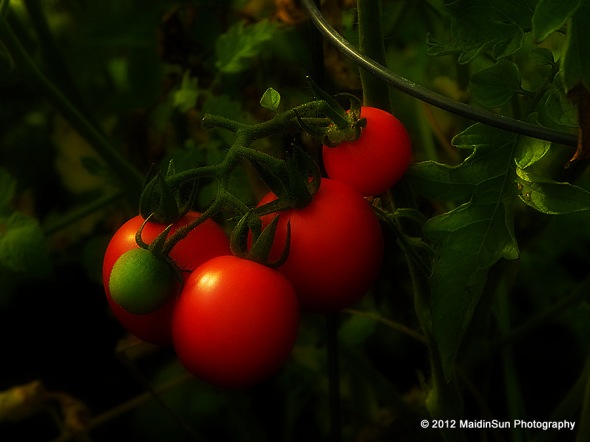 When you’re cooking with food as alive as this — these gorgeous and semigorgeous fruits and leaves and flesh — you’re in no danger of mistaking it for a commodity, or a fuel, or a collection of chemical nutrients.  No, in the eye of the cook or the gardener… this food reveals itself for what it is:  no mere thing but a web of relationships among a great many living beings, some of them human, some not, but each of them dependent on each other, and all of them ultimately rooted in soil and nourished by sunlight.

~ Michael Pollan, In Defense of Food:  An Eater’s Manifesto 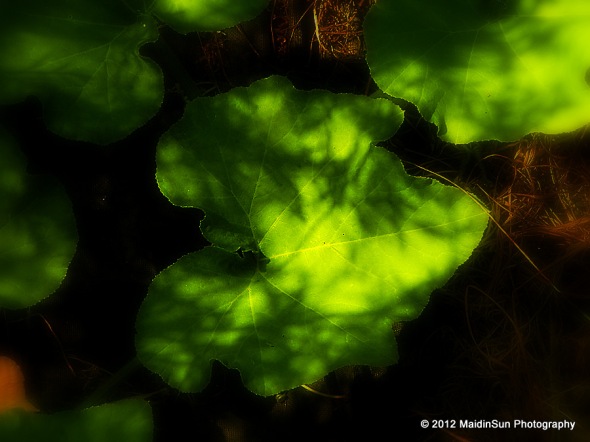 Leaves of what was The Mystery Squash. All will be revealed soon.

Large flower of The Mystery Squash.

While we were vacationing for two weeks in June, the critters (groundhogs and rabbits) had field days in the garden, gobbling up our broccoli, lettuces, and chards.  They also ate off the tops of the pepper plants.  We had to give up on that particular planting of broccoli, lettuces and Swiss chard.  We’ve since replanted.  I’m sure we’ll manage to get some lettuces since they grow quickly and we start picking the leaves when they’re about 4-6 inches high.  The Swiss chard is already at a picking point.  I’m not sure about the broccoli.  We’re rank amateurs when it comes to broccoli and still learning about its growing ways.  There might not be enough growing season remaining.  We’ll have to wait and see.

I was thrilled to see that our Mystery Squash is Butternut Squash.  I was afraid it might be another round of Hubbard Squash, which is not such a bad thing, but dang, they are difficult to cut. (Some websites recommend a hacksaw or a hammer and cleaver to cut them open.  I use a hacksaw.)  They’re huge, too.  The Hubbard is nice because it’s a substitute for pumpkin (canned pumpkin is often Hubbard Squash), but how much pumpkin (or Hubbard) can two people eat?  Well, you’d be surprised, but sooner or later those two people get tired of it no matter how yummy that Thai Pumpkin Soup tastes.

The wonderful thing about Butternut Squash is that it seems to have a very long shelf life.  I will not have to cut it up and freeze it.  I can store it in the basement knowing it will likely last throughout the winter.  Easy peasy, bright and squeezy.

Remember what happened to our garden shed way back in April?

As you may or may not remember, our garden shed took a big hit from the wind this past spring.  (You can see photos of it here and here.  Or, if you’d like to see the entire posts concerning the shed, you can find them here and here.)  We (meaning mostly M) have rebuilt it, turning it into a small greenhouse with a rain barrel.  How cool is that?

M did an amazing job of rebuilding it.  All I did was help hold up a wall here and there once in a while.  He’s been working on it throughout the summer, and we now have lettuces growing in the big pots sitting on the bench in the greenhouse area.

As for the garden, we currently have a glut of cherry tomatoes (red and yellow).  Since we have not had much luck over the past few years with the usual Better Boy, etc., type of tomatoes, I convinced M to try some heirloom tomatoes this year.  They are really doing well, and we’ll soon have a glut of them for turning into sauces.  Right now they’re ripening at a rate that’s just enough for us to eat on sandwiches (nothin’ better than a tomato sandwich made with homegrown tomatoes!), in salads, or to pop in your mouth from right off the vine.

This is going to make a great spaghetti sauce. (Now that I look at it, I think this photo is just about to scale — on my monitor.)

The peppers are doing surprisingly well, too.  Maybe we should have the groundhogs come in and eat off the tops every year.  I’m going to have a lot of yellow and red (sweet) bell peppers, as well as plenty of the hot varieties (banana, jalapeño, and some kind of chili whose name I cannot recall at the moment).

We ate some the baby Swiss chard leaves yesterday for lunch.  All in all, the garden is doing much better than we expected after we came home to the devastation wrought by the groundhogs and rabbits.  The fencing has been redone and, so far, has kept the greedy little critters out. 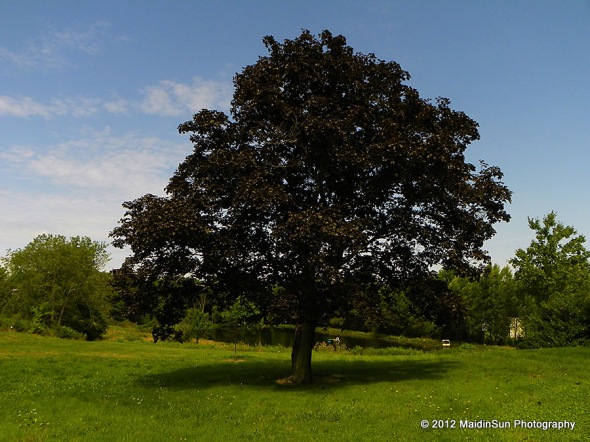 The Old Maple (aka The Sitting Tree)

It’s very peaceful in the garden, especially in the morning.  The birds were serenading me as I pulled weeds (too bad they can’t help me pull them!).  I say I loathe weeding, but the truth is that it’s a grounding and meditative process that pays off in an assortment of ways including a harvest of excellent food to put on the table.

When I finished in the garden, I sat in the shade of the Old Maple for a while, listening to the breeze in the branches and enjoying the morning.  It’s a wonderful place to sit and meditate, to sit and write, or to just sit and be.  It was under the Old Maple that I’ve had lovely encounters with a red fox, some Eastern Bluebirds, American Goldfinches, and a large grandmother snapping turtle.  Fairy rings sometimes pop up near the Old Maple.  Best of all is its shade.  Even on the hottest of summer days, it feels cool under the branches of the Old Maple. 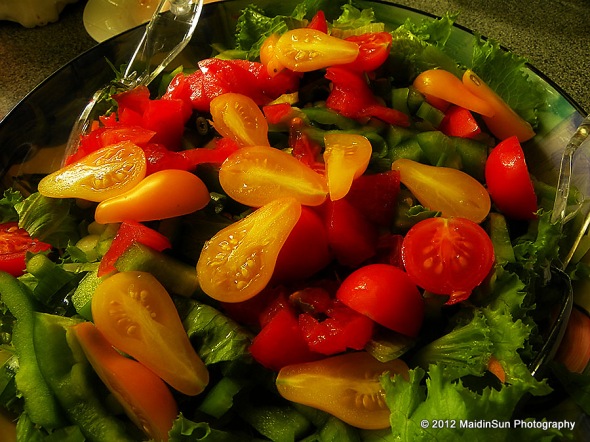 Lunch. The lettuce is from a local farm. Everything else came from my garden.

Imagine if we had a food system that actually produced wholesome food.  Imagine if it produced that food in a way that restored the land.  Imagine if we could eat every meal knowing these few simple things:  What it is we’re eating.  Where it came from.  How it found its way to our table.  And what it really cost.  If that was the reality, then every meal would have the potential to be a perfect meal.  We would not need to go hunting for our connection to our food and the web of life that produces it.  We would no longer need any reminding that we eat by the grace of nature, not industry, and that what we’re eating is never anything more or less than the body of the world.  I don’t want to have to forage every meal.  Most people don’t want to learn to garden or hunt.  But we can change the way we make and get our food so that it becomes food again — something that feeds our bodies and our souls.  Imagine it.  Every meal would connect us to the joy of living and the wonder of nature.  Every meal would be like saying grace.

Dinner on the veranda

That’s it from the garden and the Bogs for today.  Thank you for stopping by.  It looks like it will be a good evening to have dinner on the porch or deck, but we’ll have to fit it in before the rains that are forecast to begin around 7:30pm.  Dinner will include lots of homegrown tomatoes and some of the best tasting, locally grown, sweet corn I’ve ever had.  You won’t need dessert after that.

Wishing you a joyful day, a wonder-filled evening, a peaceful night, and meals made with wholesome, delicious foods.

35 Comments on “In the garden”