← Fast and not at all furious
The spring migration has commenced → 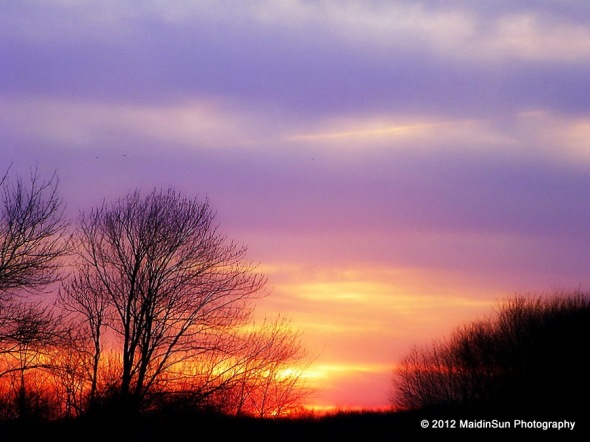 Yesterday's sunset brought to you by the March Lion in collaboration with Mother Nature.

The March Lion has returned.  The wind howled, moaned, groaned, roared, and growled throughout the night and day.  Rain slashed and almost slammed against the house this morning.  The temperature has been dropping.  The cold is returning for another brief visit. 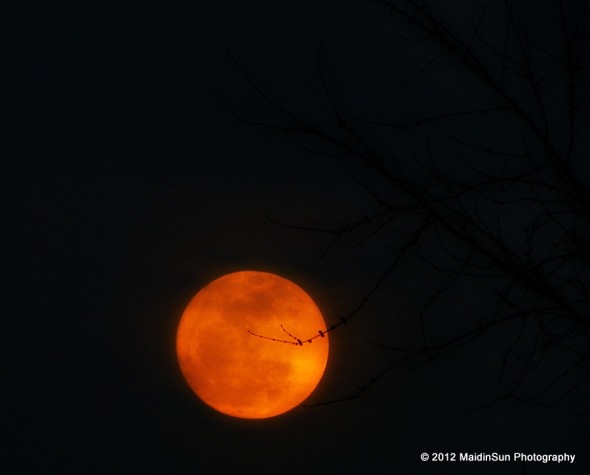 Yesterday evening the moon caught me preparing dinner once again.  I was ready for it with the tripod.  I watched the sunset for a little while first, giving the moon time to clear the neighbor’s house and the power lines.  If I hadn’t, my moon photos would look like this:

I took and posted this shot to show you that all is not necessarily as it seems.  It has occurred to me that the photos I take on my walks might give the mistaken impression that Breezy Acres is an isolated bit of property with little of civilization surrounding us.  We do have neighbors on all sides of us.  There are power lines running along the street side of our property, and there is even a natural gas well nearby.  However, we also have plenty of room to stretch out and not notice the neighbors (except when they’re bulldozing down our hedgerow) or the power lines.  The natural gas well is hidden in some trees a few properties over from us.  We wouldn’t know it was there if we hadn’t inquired about wells in the area when M and I were thinking about making an offer on the house.

Someday I may try a series of shots showing the more “civilized” areas that surround us here at Breezy Acres.  (If you’re new to the blog, Breezy Acres was the name given to this 8 acres of property M and I bought seven years ago). 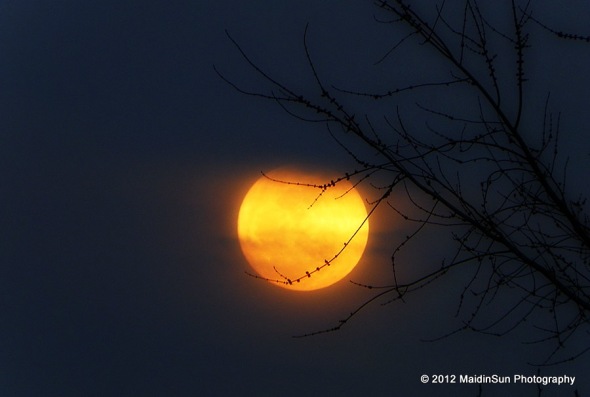 In the meantime, the moon is so much prettier without a corner of the neighbor’s roof and some power lines blocking it, don’t you think?  As you can see, clouds began to drift in during the brief time I was outside capturing the moon.  There was an almost-rainbow effect from the clouds which my camera didn’t capture. 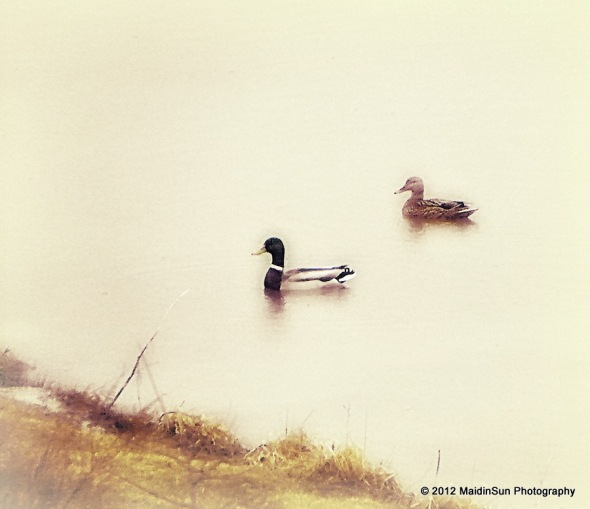 The mallards have returned, and the ring-necked ducks have left us, continuing their journey towards Canada, I presume.  The ducks seem to be enjoying the rainy weather.  Even the blustery winds don’t ruffle their feathers.

Some people think I’m a little crazy when I talk about the tree auras.  I decided to try to capture them in a photograph, and was surprised to see the images turned out pretty well.  They needed a bit of tweaking with color and contrast to bring out what I think of as their auras.  In the above photo, you can see the greens of the willows.  They were almost the last trees to lose their leaves.  I think they’ll be the first to leaf this spring.  From the looks of things, it will be soon.

The second tree photo shows the maples (reds) and… yikes, I’m not sure of the names of the trees with the green and yellow auras.  I’ll have to ask M later.  He’s my tree person, being fairly knowledgeable when it comes to identifying trees.  He spends so much time with the trees on our property that I’m pretty sure he is friends with and on a first name basis with them all.

This is what the trees looked like on Monday after the weekend snowfall.

That’s it from the Bogs for this wet and blustery Thursday.  I might have a few surprises for you next week.  It depends on how the weekend (starting tomorrow) goes.  In the meantime, thank you for visiting and gazing at the moon with me.

48 Comments on “The March Lion”