A visit from a blue jay

A blue jay stopped by today.  Did you know the pigment in their feathers is melanin?  Melanin is brown, but blue jays have modified cells on the surface barbs of their feathers, and light scattered through those cells makes the feathers blue.  It has something to do with structural coloration.  If a blue feather is crushed, the blue disappears.

Although blue jays do migrate in large flocks along the Great Lakes, some stay for the winter.  The experts think they alternate years, migrating one year and then staying the next.  Because acorns are one of their favorite food, they are credited with spreading oak trees.  They are the Johnny Appleseed of oaks.

Blue jays are one of the first birds I remember from childhood.  Their color made them standouts, as did all the noise they would make outside my bedroom window in the early morning hours.

There were all sorts of visitors at the feeders today, fattening up as the snow falls, including a Red-Bellied Woodpecker.  Unfortunately, I missed my shot at him.  I was outside watching as two geese slowly and carefully walked across the frozen surface of the pond, and didn’t see the woodpecker until just before he took off.  I think the geese were searching for open water.  They didn’t find any on or around the pond so they moved to the woods and the creek where the water is still flowing. 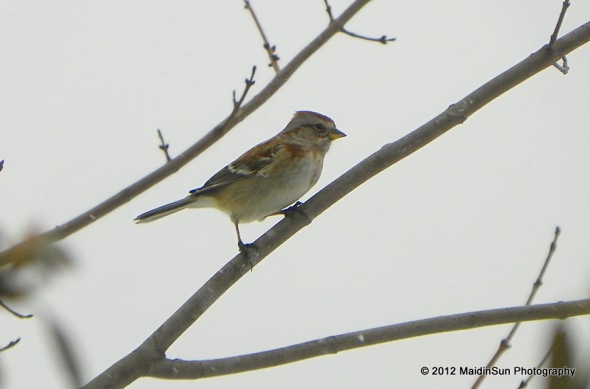 I found a good spot for bird watching, one where they don’t seem to be bothered by me (or notice me at all).  I don’t know why I didn’t think of it before but one of the best spots in the house for observing the birds is in the master bedroom.  The bush and tree where the birds like to hang out when they’re not at the feeders are right outside of that window.

Sitting for a long period of time isn’t easy.  Well, the sitting part isn’t so bad.  It’s the getting up after my legs and/or feet have fallen asleep.  Izzy (the cat) and I sat on the bedroom floor for about 45 minutes this morning, watching as the different birds flew in and out.  A big flock of starlings came along after a while and chased away the little birds.  That’s when I decided it was time to get up.

Since it’s Valentine’s Day, I found some red for you.  A little here…

I had difficulty getting a clear shot of Mr. Cardinal.  He was constantly in motion, on lookout while the Mrs. was busy eating at the feeder.

What would Valentine’s Day be without some love birds?  It’s true they are not real Lovebirds.  They are mourning doves who always come to the feeder as a couple rather than one at a time like Mr. and Mrs. Cardinal.

That’s it from the Bogs for today.  Thank you so much for stopping by.  Happy Valentine’s Day!

This is the miracle that happens every time to those who really love:  the more they give, the more they possess of that precious nourishing love from which flowers and children have their strength and which could help all human beings if they would take it without doubting.

33 Comments on “A visit from a blue jay”