In the sheltered heart of the clumps last year’s foliage still clings to the lower branches, tatters of orange that mutter with the passage of the wind, the talk of old women warning the green generation of what they, too, must come to when the sap runs back.

The grim frost is at hand, when apples will fall thick, almost thunderous, on the hardened earth. 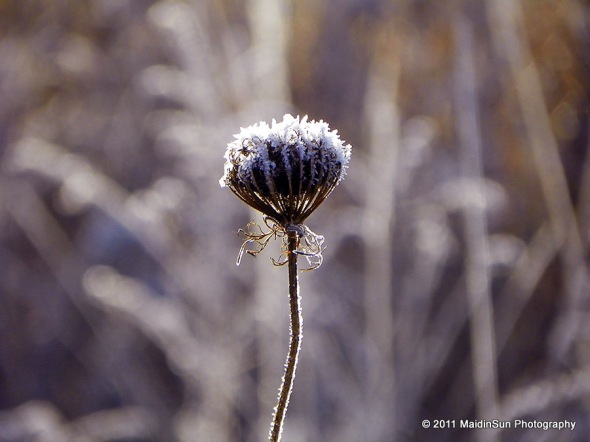 How can those who do not garden, who have no lot in the great fraternity of those who watch the changing year as it affects the earth and its growth, how can they keep warm their hearts in winter?

I’m still sorting through the photos from last Saturday morning’s walk through the frosty meadows.  The little Christmas lights (bokeh) continue to surprise me here and there.  The golden light from the sun (and the “open shade” white balance setting on the camera) really helped to bring out the sparkle.

Queen Anne’s Lace is a beautiful summer flower that also shows off its beauty in the winter months.

I tend to photograph these a lot in the winter.  I think that’s because they still look like flowers, especially with raindrops, frost, or snow settled in and on them.

There are snow showers in the forecast for today, but no sign of it as of this writing.  The Lake Erie snow machine will be cranking it out.  From what I’ve seen and read, most the snow will head east so I don’t expect we’ll get much in the way of accumulation here at Breezy Acres.

I’ll be up in Cleveland tonight where it is more likely to snow.  Let’s hope the snow showers aren’t too bad.  Last year around this time M and I were up that way and just missed getting stuck in Cleveland for hours while the snow squalls had traffic stopped.

That’s about it from the Bogs for today.  Thank you so much for dropping by, and for all the lovely comments I’ve been receiving lately.  Hopefully I will get caught up with everyone soon.  Have a great weekend!