← Where frost and fog meet
In transit →

Reflection in the rearview mirror attached to my bicycle.

The Western Maryland Rail Trail is located in Maryland between Hancock and Fort Frederick, and is sandwiched between Interstate 70 and the C&O Towpath that runs along the Potomac River.  M and I took a short ride (8 miles) starting in Hancock on the first day of our trip east.  We took another short ride (8.4 miles) starting on the opposite end of the trail at Pearre Station on our trip west (home).

The trail is 22.5 miles and paved.  As mentioned in this previous post, the trail winds through the mountains of western Maryland, following the curves of the Potomac River and the C&O Canal.

M and I are talking about going back again someday to ride the entire trail, at least one way.  I have been doing fairly well on the short trips.  I have had a little trouble (sciatica) when we extend beyond 8 miles.  I am hoping that as I continue to ride I’ll work that out.

Shortly after the start of our first ride we found ourselves pedaling alongside a series of empty houses and an old orchard.  I spent a few minutes online trying to find out about the houses, but didn’t find anything.  There is probably something out there about the houses, their history, and why they are empty, but I don’t have the time to pursue that information today.

It would have been interesting to get a closer look at the houses (and photograph some of the indoor sections).  However, the land is posted (no trespassing) and being a rule-follower (for the most part), I decided not to trespass. 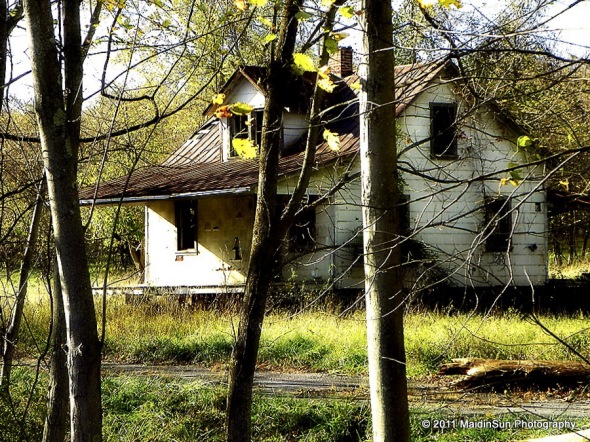 We had beautiful weather for both rides we took on this trail.  Having walked a little of it years ago, it was nice to finally see more of it.  That is the beauty of riding a bike.  We can travel farther, faster.  A little faster in my case since I tend to stop a lot to take photographs.  I get in my interval training that way.  M, at my request, continues on ahead while I stop.  When I finish taking photos, I pedal as fast as I can to catch up with him.

I do something similar to that when we hike.  I don’t pedal, of course, because I’m not on a bike. I jog or run or at least walk very fast.  It’s a good way to get the heart rate up.

I really like rail trails.  They tend to be relatively flat, which means you have to pedal all the time.  No downhills to coast, but no uphills to struggle through, either.  The main reason I like rail trails so much is the lack of automobile traffic.  I have noticed that there are some drivers who get annoyed with bicyclists on the road.  Instead of moving away from the cyclist, they seem to be amused by veering towards them.  And some drivers are not very patient when they have to wait to go around a cyclist.   (Yes, I’m speaking about YOU, the guy who honked his horn at me while I was on a narrow main street in a small town in New Jersey.  Like you, I had nowhere else to go except forward.  Sorry you had to wait to get around me, but not too sorry to have seen you waiting at a stop light after your impatience with me.  Instant karma.) 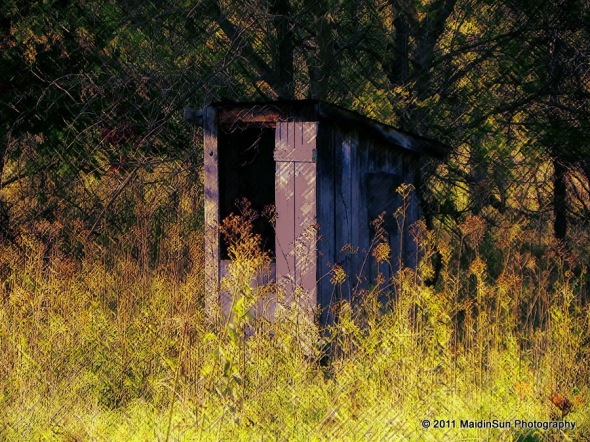 It’s another rainy day here in the Bogs.  We’re working on setting a record rainfall this year.  As of October 10th, we have had around 45 inches of rain in our area.  While we’re about 20 inches away from the all-time record in this area, the rainfall we had yesterday and today should have slid 2011 into being ranked as one of the top 10 rainiest seasons.

The last time I checked, Cleveland was only 2 inches away from breaking their all-time record annual rainfall.

Light at the end of the trail

I’ve spent a good part of the day unpacking and putting things back in order.  Tomorrow I hope to dig in to some serious de-cluttering.  I’m starting in the kitchen.  To be honest, I’m finishing up the kitchen.  I started to de-clutter and thoroughly clean the kitchen in the spring, but never got around to finishing it.  With more rain in the forecast, tomorrow will be a good day to complete that room and maybe even move on to the next.

Light at the end of the trail II

That’s it from the Bogs for today.  Thanks for stopping by and joining me on one of several bike rides I took while away.  I hope you enjoyed it as much as I did.

29 Comments on “First ride on the Western Maryland Rail Trail”