It is cold and rainy here in the Bogs today.  It seems early to be writing “it is cold.”  This feels more like late September weather, the kind we get just before a bout of October Indian Summer.

I didn’t rise before or with the sun this morning.  Not that I would have seen the sun.  I woke up to the rhythmic sound of a steady rainfall.  The air was damp and chilly, the sky a dark gray.  The bed was warm and snug.  Guess which one I chose? 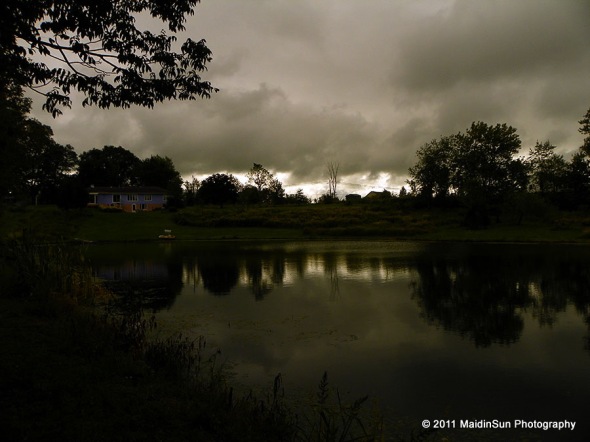 A late morning view of the pond, the sky dark and heavy with rain.

I don’t care for alarm clocks.  I’ve been waking up naturally around 6:30am.  The plan is to get used to that and then see if I can manage to wake up earlier without an alarm.  Alarms tend to do one of the three things for me.

So when I woke up to the rain and cold at 6:30 this morning without an alarm, I chose to ignore my internal wake-up call and go back to sleep.  I think it was a wise choice.

Rain on the pond

I thought about waiting until the rain moved on to go for my walk.  However, there is always the possibility that the rain won’t move on for a while.  We have had some spurts of sunshine along with patches of blue sky, but mostly it has rained.  Just as we get lake effect snow, we get lake effect rain.  The on and off drizzle reminds me of snow squalls, only warmer.  Not that much warmer, though.  Last time I checked, the temperature was in the 40s.

We are supposed to have nice weather after today.  It will be a good time to get out to the garden and start putting it to bed, so to speak.  Most of the vegetables are finished.  I would like to try another planting of Swiss chard.  Or maybe spinach.  Or both since both appreciate cooler weather. 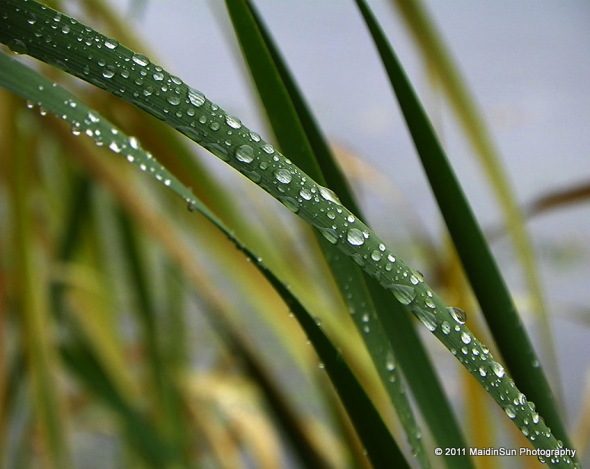 I have been wondering what I am going to do on the last day of my outdoor commitment.  If I counted correctly (and I frequently don’t), the last day should be next Friday, the 23rd of September. 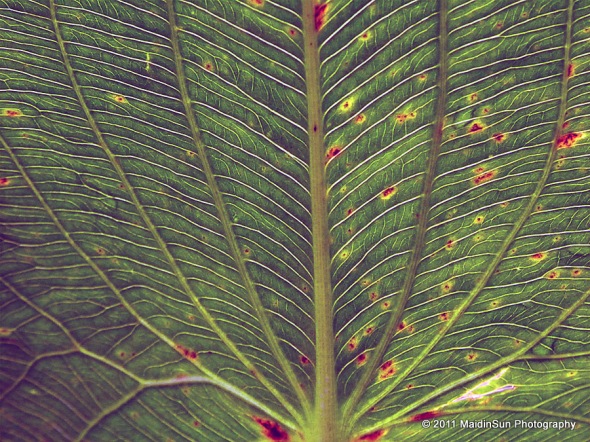 A celebration of some kind seems in order, don’t you think?  But what?  I originally planned to do a look back on the year, creating collages of the seasons.  Pure laziness is putting on damper on those plans.  I have not yet moved everything (i.e. photos) from my old computer to my new one.  I know, I know.  It’s been MONTHS.

I’ve been waiting for a rainy day.  Or a cold, snowy day.  A day after this commitment is over and I can spend time getting caught up with things that were shunted aside so I could put together a blog post every day.

Raindrops marching down a blade of grass

That’s just an excuse, you know.  I enjoy blogging.  Sorting through the stuff on my old computer?  Not so much.

I would probably enjoy it more than I think if I’d sit down and do it.  Sometimes it’s fun to sort through old photos, relive old memories, and get a good look at how far I’ve come (or not) in terms of my photography skills.

Colors in this photo courtesy of Heat Map 2.0 in Picnik

So.  I have no idea what I will do to mark the end of my commitment.  Maybe nothing much at all.  Just another blog post. 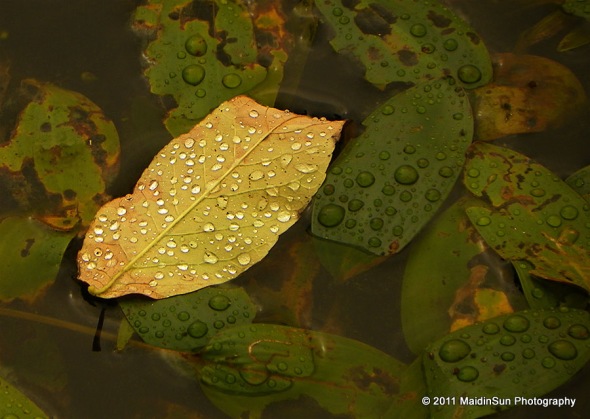 Last year at this time I was blogging about how dry the weather had been.  That’s typical for this time of year.  We’ve had more rain than usual lately.  I also posted a photo of crabapples dripping with dew. 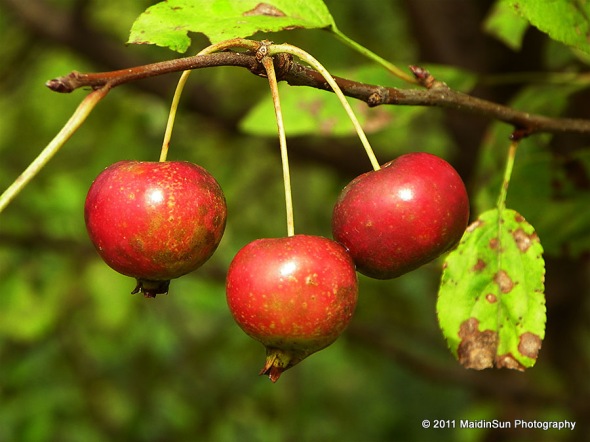 Except for the raindrop caught between the middle and right crabapples, they are looking drier and somewhat bigger this year.  Maybe they’re just further along in the growth process this year than they were at this time last year.  Funny how the crabapples were much wetter with last year’s dew than this year’s rain.

Well, that’s about it from the Bogs for today.  Thanks for dropping by and keeping me company on this chilly, rainy day.  How about a cup of hot tea?  Or maybe some hot chocolate?  My vote is for the hot chocolate.  🙂