Somewhere in the neighborhood

According to the World English Dictionary, a muck rake is an agricultural rake used for spreading manure.  A lake rake, on the other hand, is an agricultural rake used for raking weeds out of a lake or pond.  The pond here at Breezy Acres not only has weeds, it has muck (also known are mud or mire).  So when I rake weeds and muck out of the pond, I think of it as muck raking.  It is a very dirty, messy, muddy, mucky business.

Cows in a field somewhere in the neighborhood

That is how I spent my outdoor time today.  Muck raking.  Lake raking.  Mechanical pond weeding.  Call it what you will, it’s difficult work.  It is a good cardio and strength workout that uses a lot of muscles in the arms, legs, chest, and core.  The lake rake itself is somewhat heavy.  To mechanically weed the pond, I lift the rake, and using momentum, I swing it out into the pond while simultaneously holding tight to the handle so I don’t end up tossing the entire rake into the pond.  The rake sinks into the weeds.  I pull, or dredge, bringing back weeds, muck, tadpoles, small fish, frogs, and turtles.  I lift the rake, which is now very heavy, and wait for the tadpoles, small fish, frogs, and turtles to make their way off the rake and back into the water.  Then I swing the rake to throw the muck and weeds on land.  I watch the muck and weeds for a few seconds to be sure nothing is wriggling in there.  If something (usually a tadpole) is moving around in the muck/weed pile, I pick whatever it is up and throw it back into the pond.  I’m rather sensitive about killing the residents of the pond.  Other than the weeds, that is.

One of the main things to remember about mechanically weeding a pond is that the person doing the weeding is the machine, and the machine gets dirty, slimy, and mucky.  It’s no place for a camera.  I was thinking, though, that the next time I do some pond weeding, I’ll bring the camera within walking (but not muck) distance, and try to get a few shots of this dirty work before I get too covered in mud and muck.

The photos used above are from a bike ride I took a few evenings ago.  It was a short (5.4 miles) ride around the neighborhood.

The rest (following this paragraph/sentence) will be from last week’s trip up to the Holden Arboretum to search for gnomes.

It’s a very warm day here in the Bogs, but breezy enough that it didn’t feel too bad out there.  I worked at weeding the pond for a little over forty minutes.  I was hoping to get an entire hour of weeding in, but I had to stop when I reached the point where my arms could not lift the rake anymore. 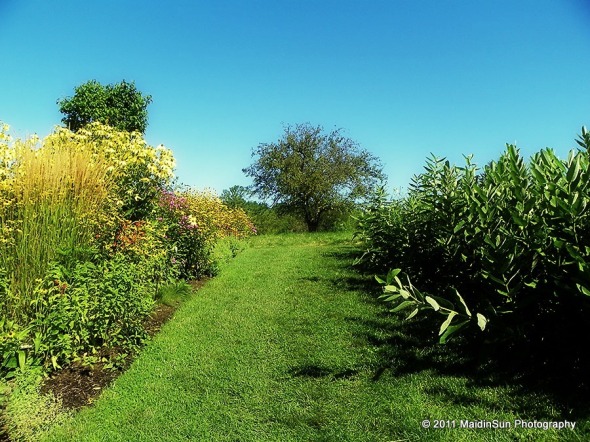 I'll bet the flower beds at the arboretum are well mulched and mixed with compost.

Much of the muck stays put along the side of the pond, helping to build up any areas that might erode.  We let the weeds dry in the sun, then come back around a day or two later with a pitchfork to scoop up the dried weeds and take them (in a wagon) up to the compost pile.

I was looking online today to see if there’s a better way to do the pond weeding.  I came across the Jenson Lake Mower.  While most of the time I dream of buying a new camera, after forty minutes of weeding the pond I am dreaming of a lake mower. 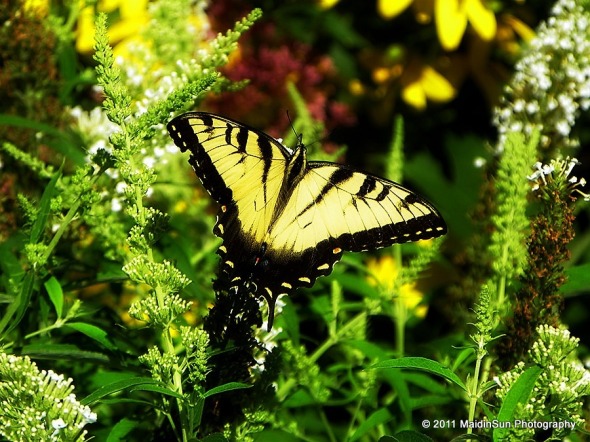 I’d even be willing to test one out, and write a review.  Anyone want to donate one for the cause?  😉

Ah well.  I thought not.  It’s an expensive donation/proposition.  But a girl can dream.

Tomorrow will be a full day.  I’m off to see the doc for my yearly check-up.  I’m not where I’d hoped to be by this time in terms of some of the numbers the doc will be looking at, but there should be some good numbers to go with those that haven’t changed much.  I hope.  We’ll see how all those fruits, vegetables, whole grains, and legumes have paid off numerically.  After my visit with the doc, I’m going to visit the Hartville Market.  It’s nearly time for the annual ritual of the Canning of the Tomatoes and I often buy a bushel or two from one of the vendors at the Hartville Market.  I’d like to get some peppers while I’m at it and make some fresh salsa.  Our garden tomatoes and peppers are not quite ready yet.  Another place I want to visit is Walnut Drive Gardens.  The peppers are ready to pick now so I may go picking instead of buying them at the Hartville Market.  It depends on time and weather.

Meet HAP — The Gnome.  I’m not sure what HAP stands for, although I am guessing that the HA might have something to do with Holden Arboretum.  He looks like a park ranger to me. 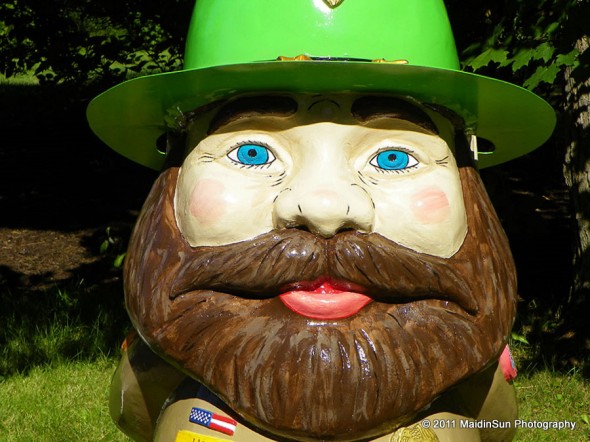 HAP was ready for his close-up

That’s about it from the Bogs for today.  Hopefully tomorrow’s post will involve a little less muckraking.  It’s too bad the same can’t be said about politics.