Relaxing on the shore

Perhaps you’ve wondered what happens at the after party.  I thought I’d give you a glimpse of what happens after a party by the pond (even if it is a mini version and not The Official Party By the Pond).  Following our little impromptu picnic/party on Saturday, a number of rain storms moved through.  In between the raindrops and my little cool off in the rain, I went out for a little walk, taking the camera along, to see how the water might have prettied up everything.  (That’s an unofficial photography term:  prettied up.)

One of the first things I noticed before I had a chance to step foot off the deck and patio was a large creature making its way out of the pond and up the hill towards the wildflower meadow.  As M and I watched, it went into the meadow and eventually made its way out the other side, heading further up the hill.

Every year at least one large snapper leaves our pond.  I am not surprised when the young ones leave, as the pond can support a finite number of turtles (I’m not sure what that number is).  I do wonder about the old ones when they go.  Have they given up the fight and been chased out by a young one?  Or do they suddenly get a yen to go traveling, leaving the pond they have known to the young ones in order to seek out new adventures?

If turtle has shown up in your life, it is time to get connected to your most primal essence.  Go within your shell and come out when your ideas are ready to be expressed.  It is time to recognize that there is an abundance out there for you.  It doesn’t have to be gotten quickly and immediately.  Take your time and let the natural flow work for you.  Too much, too soon, can upset the balance.  Turtle reminds us that all we need for all that we do is available to us, if we approach it in the right manner and time.

Turtles remind us that the way to heaven is through the earth.  In Mother Earth is all that we need.  She will care for us, protect us, and nurture us, as long as we do the same for her.  For that to happen, we must slow down and heighten our sensibilities.  We must see the connection to all things.  Just as the turtle cannot separate itself from its shell, neither can we separate ourselves from what we do to the Earth.

Someday I may get up the nerve to face the Grandmother or Grandfather Snapper as they make their way up the hill.  For now, because I’ve read about how they don’t like to feel cornered, I take my photos from behind.  It seems safer that way. 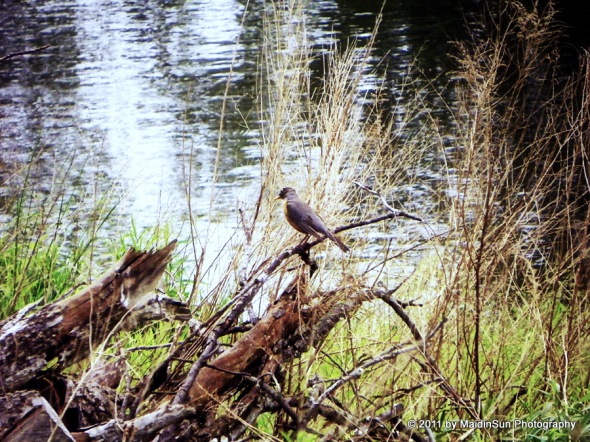 Robin on the brush pile

After cautiously and carefully visiting with Grandmother Turtle, I made my way over to the timothy grass meadow and the little section off to the left where the rhododendrons, peonies, and day lilies are sheltered, something they apparently all like as they are thriving. 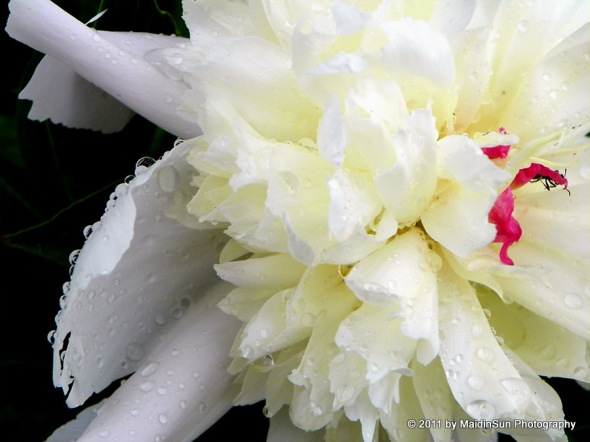 I apologize for the plethora of peonies.  It has become, for me, a symbol of Spring 2011.  A reminder of connections, of the feeling of oneness, of staying present.  It’s not easy to stay present.  The mind often wants to wander off into other spaces and other times.  The peony helps me bring my wandering mind back to the here and now.

And, really, they were so pretty covered in raindrops.  🙂

Waiting for the grand opening

Did you know the peony was named after Paeon, the physician to the gods?  It was one of those cases where someone was jealous (of Paeon) and to protect Paeon, Zeus turned him into a peony.  One has to wonder how all these mere mortals felt about being turned into flowers for various reasons.  A flower, I reckon, is not such a bad thing to be.

Weighed down by the rain and wind

There is a variation to that myth in which a wood nymph named Paeonia, well loved by the gods, was transformed into a blushing peony by a jealous Venus.

There always seems to be jealousy involved when it comes to the gods, doesn’t there?

Lamenting jealousy, in gods and men

In Chinese flower symbolism, the peony is said to be esteemed as one of the most beautiful of flowers.  It is a symbol of nobility and value, and earned the title “king of flowers” during the Sui and Tang dynasties.  Pictured fully open, it represents peace. 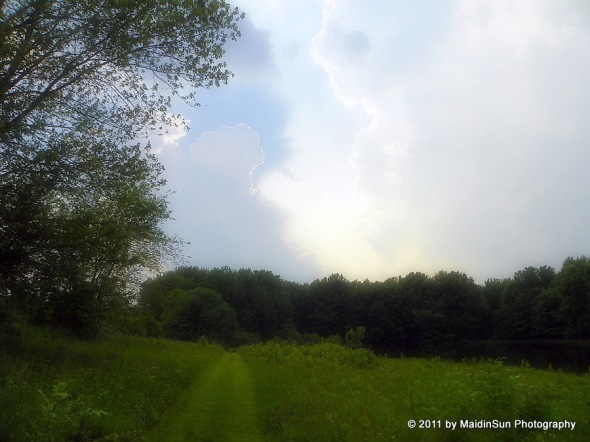 Walking through the meadow

I left the peonies after a while and wandered through the meadow.  That sounds much more idyllic than the reality.  It was warm, humid, hazy, and the mosquitoes were having a grand feast (that feast would be me). 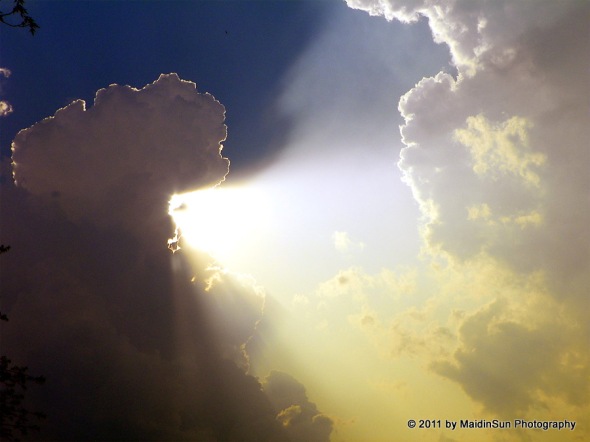 The sun breaking out of the clouds

We had both sunlight and rain at the same time on numerous occasions that evening.  But no rainbow.  Strange.  There was so much beauty going on elsewhere, perhaps the rainbow decided this was not its day to shine.

Raindrop bokeh in the meadow grasses

The light was amazing.  To truly appreciate the rain and grass photos, you’re going to have to click on them to see the slightly larger version. 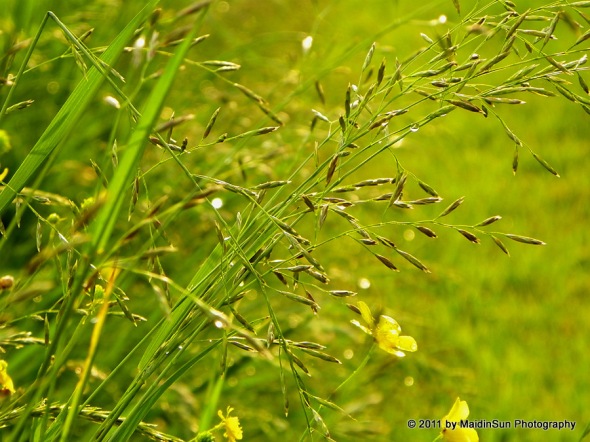 While they are not as pretty as a peony, these are actually some of my favorite shots of the After Party.  Mum Nature was hiding some of this beauty as it wasn’t until I crouched down that I noticed the light shining through the grasses, buttercups, and raindrops.

From there I walked over to the wisteria, but will save that for another day as it’s time to move on to today’s outdoor adventures.  We had quite a morning here in the Bogs.  We woke up to dark, cloudy skies and thunderstorm watches and warnings.  In fact, it was the weather radio alarm that caused us to wake up.

I had some errands to run this morning and found myself stalling in the grocery store, trying to wait out the storm that hit soon after I parked the car and went into the store.  The sky was incredible.  A wall of darkness moved from the north and west (heading south and east).  There have been very few times in life when I’ve seen it grow that dark during the daylight hours.  To make up for the darkness of the clouds, the lightning put on a bright show, followed by the usual booms of thunder.  The wind tore through the area.  I returned home to find some branches down, the deck furniture and umbrella toppled, and the pedal boat missing.  Given how heavy the pedal boat is, I could not imagine the wind picking it up and taking it somewhere.  I eventually found it shoved into the cattails at the back of the pond.

The storm took the flowers from the rhododendrons and flattened the peonies into the ground.  The peonies might bounce back.  The rhododendrons, on the other hand, are now finished for the season.

The storm also seems to have driven this little guy off course.  He was on the patio around lunch time, just sitting in the corner looking at the bricks as if unsure what to do.  He did turn around when I stepped out to take this photo, and eventually found his way off the patio.  Perhaps he’s looking for the old Grandmother Turtle, seeking advice or learning or adventures in a new pond.