Blowin' in the wind

In northeast Ohio, in between the cities of Canton, Akron, and Cleveland, and surrounding some of the bigger villages that are not big enough to be cities and so they are called villages in Ohio, you will find small rural townships in which the “downtown” is really nothing more than a crossroads.  On the corners at the crossroads, if the town is big enough, you might find a church on one corner, a firehouse on another, a bank on still another, and maybe a restaurant (or a competing church) on the last corner.  Often there is a traffic light and if you get a green and speed on through, you might not even realize you’ve passed through the center of  a town.  I hesitate to call it “the center of a town” as it really isn’t a town or a center at all.  Just a crossroads.

Flag on a windy day

You would recognize these crossroads, or centers of town, this time of year because of the flags leading up to the crossroads.  They break out the flags about a week before Memorial Day and they stay up until sometime after the 4th of July.  Because it’s Memorial Day we, like our neighbors, have our flag hanging too.  Our flag was made by Annin Flagmakers.  They claim to be “The oldest and largest maker of flags in the United States since 1847.”  They have a location not too far from here in Coshocton, Ohio, which was featured on ABC World News back in April.

The town we are associated with for postal (mail) purposes was founded in 1802 and is one of 18 townships in the county.  The population during the year 2000 census was 7,212 people.  In 1832, a large number of German immigrants who were farmers, stone masons, and carpenters settled here.  A plague in 1845 claimed 49 victims, including the town’s only physician.  The first general store was opened in 1853 (I wonder if it was located at the main crossroads?).  Several of the churches found in and near the crossroads were founded early in the township’s history and are still active today.  The house M and I live in was the first all electric house in the county, according to a newspaper article we were given when we purchased the house.

I am late for Scott’s Assignment 13:  Hometown History, so this is not an official post in that regard, but I thought this might be a good day to at least find out a little something about the town in which I live even if I haven’t had the time to go out and take a few photos.  Thank you, Scott, for the prompt.  It was interesting.

The summer heat and sunshine arrived with Memorial Day.  It is a scorcher out there.  It was in the 80s yesterday and got up to 90 today.  It looks like we’re going to skip Spring and barrel right into Summer. 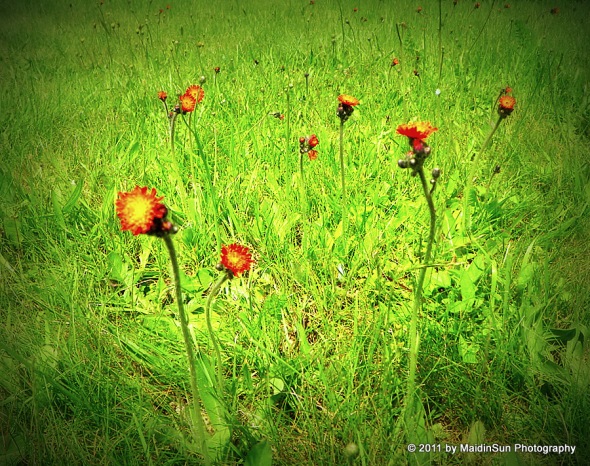 Sitting on the lawn, admiring the Hawkweed

Yesterday when I posted a photo of a Hawkweed flower, it was one of the few blooming.  Today the lawn is dotted with them almost everywhere.

Do you see the acrobatic insect?

I’ve always enjoyed the flowers, but today was the first time I sat down on the lawn and had a good look at them.  They’re kind of odd looking plants, aren’t they? 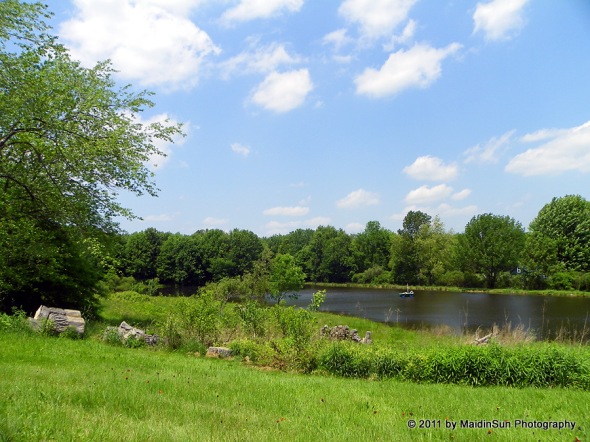 Today's view of the pond from the garden. If you look closely, you can see the little orange flowers dotting the lawn.

When I finished admiring the Hawkweed, I went up to the garden and pulled weeds for about an hour or so.  That was as much as I could take.  The temperature was rising, the sun felt like it was beating down on me, and I forgot to bring water.  I had originally planned to take a walk back to the woods since I had liberally applied insect repellent before going outside.  I didn’t have the energy for it after working in the garden.  Perhaps I’ll get out there later when things cool down a little.

One of the prettiest sights in the front yard, out by the standing stone and the stone steps for mounting a horse (part of the original farm this once used to be), are the locust trees.  They are covered with little white flowers, and the scent is wonderful, a little like wisteria.  Our wisteria, by the way, is budding but not yet in bloom. 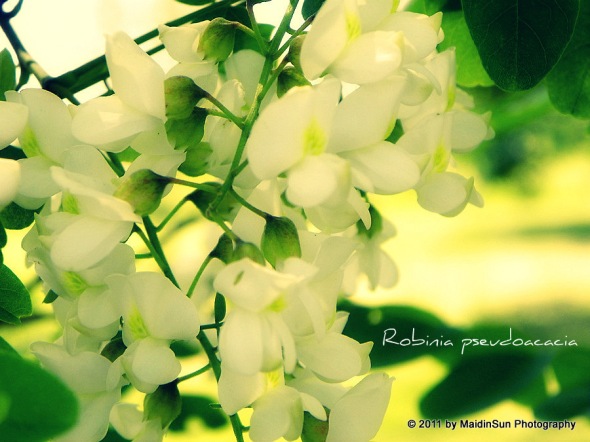 That’s about it from the Bogs for today.  If you’re interested in or looking for a post more in keeping with Memorial Day, I wrote a post about Mount Soledad a few years ago that you might like.  For a recent listing of Ohioans killed in the Iraq-Afghanistan wars, Cleveland.com has this War Memorial.

And if you’re looking for that post about yesterday’s bike ride, I’m hoping to get that put together for tomorrow.  The photos are ready but I’d like to tell you a little about the area where we took our ride and that requires some research.