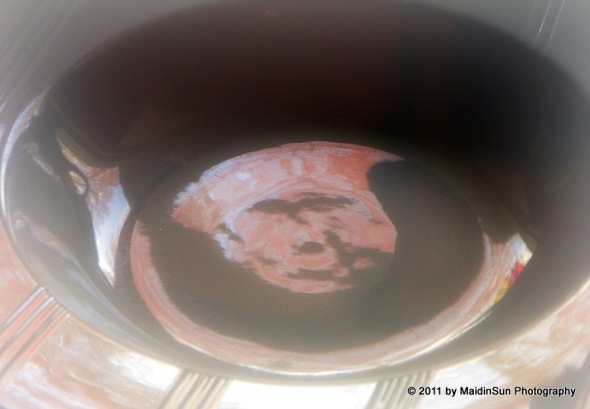 (Evening reflections in an empty bowl.)

Sometime last year I blogged about being in a cooking rut, and made the decision to randomly pick a recipe from the many cookbooks on my kitchen shelf.  The idea behind this is we would try something new at least once a week.  I’ve continued that project in some form or another, getting recipes from various places (books, online, magazines), but haven’t blogged about it much since I started my outdoor commitment.

This past week I decided to concentrate on one book for a while.  I took down my copy of Sundays at Moosewood Restaurant: Ethnic and Regional Recipes from the Cooks at the Legendary Restaurant (Cookery)

and began at the natural place to begin:  The beginning.

The first section of the book is titled Africa South of the Sahara.  The first recipe in that section is for a West African Peanut Soup.  You start with onions (I threw in a chopped leek as well simply because I had one).  Add some heat (grated fresh ginger, and dried chiles or cayenne), carrots, sweet potatoes, and vegetable broth.  Simmer until the veggies are soft, then add tomato juice and purée the whole thing until smooth.   (A hand blender is a wonderful tool to have for this type of thing.)  Add smooth peanut butter, simmer until warmed up again, sprinkle on a handful of chopped scallions, and enjoy.  (The recipe states that the scallions are an integral part of the dish and not just a garnish, so don’t skip them.)

It was a very hearty and tasty soup.  I served it with a salad and homemade bread.  I have been heavy-handed with heat lately, adding a lot of spiciness to our meals.  I stayed true to the recipe this time around, and it was spiced just right.  This is a soup I wouldn’t mind eating on a regular basis.  I love the combination of sweet and spicy, with the richness of the peanut butter. 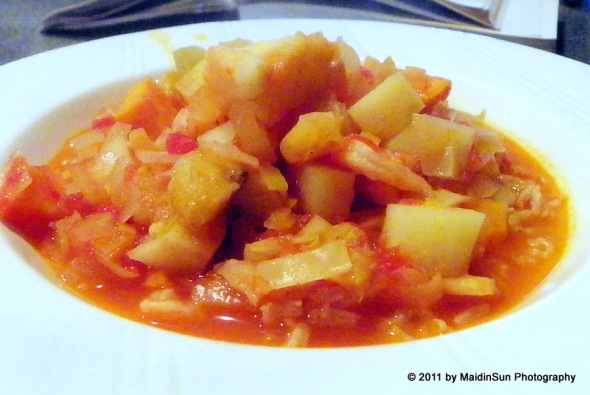 Yesterday I made Senegalese Seafood Stew.  To be honest, I did not expect to like it because I’m not a big fan of seafood in stews or soups other than a good gumbo or jambalaya.  Even then, I might not be willing to eat leftovers as it seems to me the fish takes over after a while.

(A brief note about the photo of the stew:  I have posed this stew under all kinds of light, including natural light, used various white balance settings, and cannot get it to look particularly appetizing.  Maybe that’s because it is a stew.  I’ve had similar problems with soups.  Too much going on, perhaps?)

I knew M would like it very much, and decided that if I want to stretch in my cooking, I have to be willing to try something different.  And this stew certainly qualified as something different.  One of the first ingredients listed is 2 green (unripe) bananas.  You soak them in a salt water solution prior to inclusion in the dish.  There are a lot of onions (4 cups!), potatoes, sweet pototoes, and cabbage in the stew.  For the seafood, I used the one pound of shrimp called for and one pound of cod chunks (the recipe is not specific regarding the type of fish, “1 pound fresh fish fillets, cut into chunks,” so I used what I had on hand).  It’s spiced with chiles or cayenne and summer savory.

The stew should be served over rice or steamed millet, with lemon or lime wedges.  Not having millet on hand, we went with brown rice.

I was pleasantly surprised by the complex flavors in this stew.  The bananas and spiciness did make it, as described in the cookbook, exotic in flavor.   Once again, I enjoyed the peppery flavor mixed with sweetness.  The best part?  We ate it again for lunch today and the fish flavor is clearly there but not in the overpowering way that fish can get over a short period of time.

When the weather warms up, I’ll start exploring the salads and side dishes.  It’s been cold enough the past few days that soups and stews really hit the spot and take the chill off.

The rain and storms have moved out.  The wind has moved in, threatening to huff and puff and blow our house down.  There were times during the early morning hours when I thought it might lift the roof right off.

While waves on the pond might have made for a better video than grass in the meadow, I needed some shelter to avoid the sound coming off as a loud booming rather than the whooshing of the wind.  It does boom (and howl and moan and groan and whistle and scream like a banshee) occasionally.  We are under a wind advisory for the day, with sustained winds about 30 mph and gusts up to 50 mph.  It is, to say the least, quite invigorating.

Daffodil in the woods

I walked down into the woods to take a few photos of the daffodils down there.  It’s still muddy, with the creek way outside of its usual boundaries.

After spending a few minutes kneeling (or lying) in the mud, I got up to go further down into the woods when my nose was suddenly assailed by the strong and powerful scent of skunk.  It almost knocked me over.

It was so strong I was afraid I’d been sprayed, after somehow stumbling into/onto a den on the bank of the dam.  I looked around, but saw no sign of a skunk or den.  The odor grew stronger so I decided it was time to forget the woods and go elsewhere.  Thankfully I had not been sprayed as the scent eventually dissipated with the wind.

Sky reflections in the pond

I found some downed trees on one side of the pond.  From the looks of things the wind has been having fun tumbling trees and branches around at the edge of the woods.  I’m thinking about cutting some of it up to use as a boardwalk near the cattails.  That area stays consistently wet and boggy, and could use a boardwalk.

I found this little cluster of bluets at one corner of the pond, enjoying the sunlight and a little shelter from the wind.  Still, they got rocked around quite a bit while I was trying to photograph them.  If the wind dies down tomorrow I’ll go out and try to capture a better shot.

And that, folks, is about it from the Bogs for today.  🙂