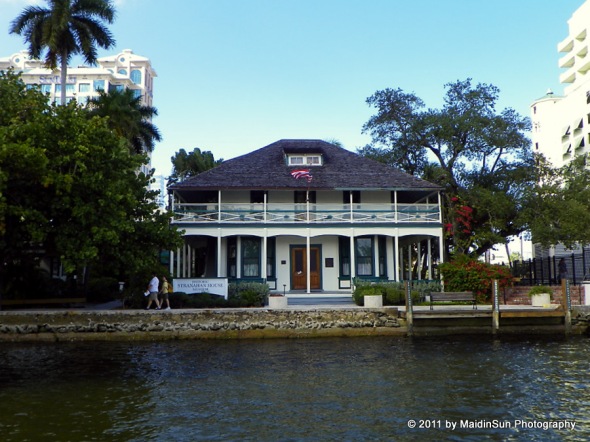 As we continued along on our water taxi tour, we passed the Stranahan House Museum.  It stands on its original location on the New River in downtown Fort Lauderdale, nestled in between some of the modern high rises.  It was originally built as a trading post for settlers and the Seminole Indians, evolving into a post office, town hall, and community center.

It was built by Frank Stranahan of Vienna, Ohio.  He relocated to Florida in 1890 due to health reasons (the same reasons we give for leaving Ohio every winter, although it might be said that ours are mental health reasons, having grown weary of winter).  Frank married Ivy Julia Cromartie, the area’s first school teacher.  In 1906 the building became their personal residence, and remained that way until Ivy’s death in 1971.  Frank committed suicide during the Great Depression in 1929.

The structure was built with Dade County Pine, a hard old wood that is termite resistant.  Based on what our guide said and what I can (and cannot) find on the internet, Dade County Pine is not available anymore because the trees were all cut down and used.  But you can find houses in Florida — quite a few of them in Key West — built with it. 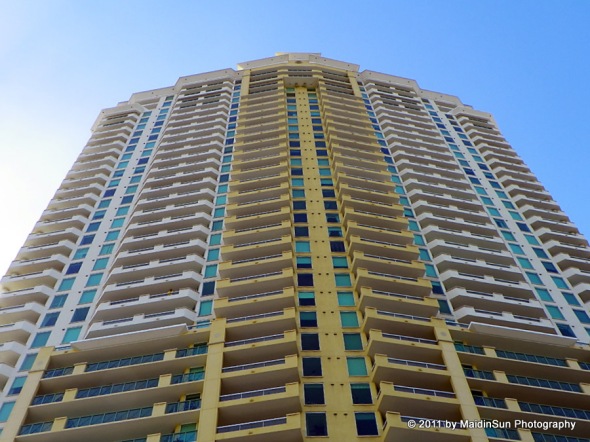 Just past the Stranahan House Museum, we passed the Broward County Jail (nicely located on the waterfront) and entered what our guide referred to as “Condo Canyon.”  According to our guide, this part of Fort Lauderdale wasn’t always as nice as it is now (hence the location of the jail).  The condos were built in an attempt to lure in working and middle class people.  That said, none of the condos are affordable for working and middle class people so apparently it failed in that regard.

We exited the water taxi at stop 11 (Las Olas Riverfront/Briny Pub) and promptly checked out Briny Pub for a little libation before taking a walk along the Riverwalk/Esplanade Park.

The drawbridge near the pub happened to be opened for a yacht coming through while we were quenching our thirst.  There seems to be a lot going on in this photo so you might want to click on it for the larger view (something you can do with any of the photos).

We left the pub and strolled along the Riverwalk to Old Fort Lauderdale Village where you will find four turn-of-the-20th-century buildings.  I’m not sure if the buildings were open to the public or not.  They didn’t appear to be.  We didn’t really have the time to check them out as it was getting pretty late in the day by the time we arrived here.

I’m not sure but I think this might be the 1905 Philemon Nathaniel Bryan House, a hollow concrete block home which now houses the administrative offices of the Fort Lauderdale History Center.

We met this unusual looking kitty here on our way back.  M was trying to see if it had six toes.  I thought he might be confusing the area with Key West and Hemingway’s cats, but it seems polydactyl or six-toed cats are most commonly found on the East Coast of the U.S. so I suppose it’s possible.  The cat’s eyes drew me in.  I don’t think I’ve ever seen a cat with eyes slanted that much.

The 1905 New River Inn is the oldest remaining hotel building in Broward County.  It is also built of hollow concrete blocks, and featured 24 hotel rooms and a dining room.

From there we wandered over towards the Museum of Discovery & Science, where we had a look at the sun dial built into the grass and then wandered back to catch a water taxi that would take us back to where we started.

I ducked into this small park before we went back to the Riverwalk so I could have a look at the fountain/waterfall. 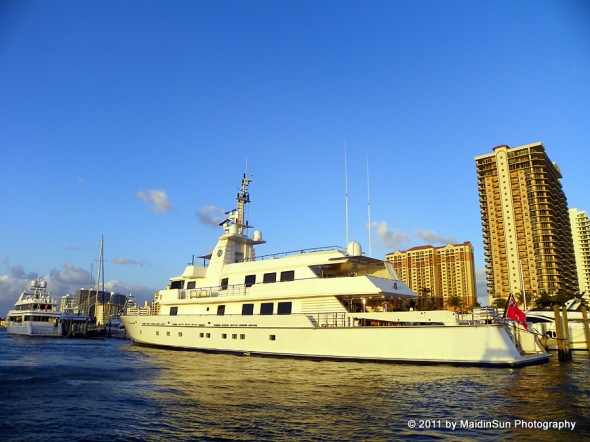 From the water taxi, near sunset

Our ride back was very entertaining.  In addition to the guide’s witty chatter, we were able to almost watch the sunset.  Unfortunately all that great light was wasted on yachts, hotels, and million dollar homes so I have no photos of beautifully lit (during the golden hour) trees or flowers.  Still, it was quite pretty.

So ends our water taxi tour.  I’ve read a few reviews of about it since coming home and they don’t make it sound good.  Our experience differs greatly from those bad reviews.  We enjoyed the chatter of the guides, the boats arrived on time, and we had no difficulties at all along the way.

It’s raining here in the Bogs today.  I did get out and about in between the raindrops, but have no photos to share or big tales to tell.  It was mostly uneventful.

Today’s visitors to the pond include a pair of mallards, three hooded mergansers (one male and two females), and one great blue heron.