Furry catkin on the pussy willow

We woke up this morning to find it snowing outside.  The local weather guy said we’d have snow flurries off and on throughout the day, with no more than an inch of accumulation, and a high of about 36.  Having just read that, you may be wondering why I am saying hello to spring.

A collection of catkins

Our number one, official sign of spring showed up this morning.  I saw my first red-winged blackbird of the season!  It’s possible they were here while we were away.  I can’t count that, of course, because I wasn’t here to see it.  I have a history with red-winged blackbirds, something I thought I had written about here at the Bogs blog.  However, I can’t find it anywhere (not even over at Bountiful Healing, my other blog).  So I reckon I’ll have to tell the story now.

A long time ago, back when M and I were dating, we’d be driving along somewhere and he’d say, “Look!  A red-winged blackbird!”  I’d look and it would always be too late (which is generally the case in a moving vehicle, I’ll have you know).  I had never seen a red-winged blackbird before and for many, many years after the first time M asked me to “Look!” he would spot them, I would look, and never a red-winged blackbird would be spotted by me.

Sometime in the 1990s (around ’93 or ’94), we were living in Missouri and traveling to Mark Twain’s boyhood hometown of Hannibal.  M the Younger and I had just finished reading The Adventures of Tom Sawyer (Barnes & Noble Classics)

, a book I’d read many years ago and enjoyed rereading with my youngest son (he was in the third grade at the time and a very advanced reader).  We decided to travel by some of the smaller roads (rather than highways) and while traveling past farms, many a red-winged blackbird was spotted on the fence posts.  Finally, as I looked and squinted and tried to focus, I saw a patch of bright red on a blackbird!  As with many things of this nature (finding sand dollars on the beach, spotting morels in the forest, etc.), once I’d seen one, they were everywhere.

The red-winged blackbird in the Laurels Preserves (near West Chester, Pennsylvania).

My challenge with the red-winged blackbird since taking up digital photography has been getting a decent photo of one.  This did happen once, in May of 2007 when we were off on our sabbatical adventures.  I have been hoping to to catch one with my new camera (with the better zoom), but have not had much luck so far.  Perhaps this will be the year for it.  Today, however, was not the day.  I did try.  The cloudiness and lack of light do not make for good bird captures with a zoom.

We spotted another sure sign of spring while having dinner yesterday evening.  Two geese flew in and landed in the pond.  It always starts with two.  As I’ve stated many times in the past, we would gladly welcome two.  But they always invite 50 or more friends and relatives to join them and we can’t have that as it’s bad for the pond (and for walking around the pond).  And so, Geese Harassment Season has begun.  We’re hoping the neighbor’s dogs will be as helpful to us as they were last year.  They seem to really enjoy chasing the geese around. 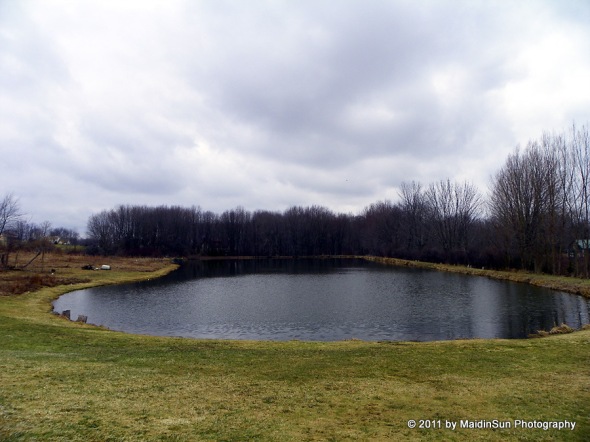 Today's view of the pond

You might think that after the intense colors and warmth of Florida I would find our gray and cold conditions somewhat depressing or dull.  Not true.  This in between winter and spring time has a beauty of its own, usually found in small bits such as the furry catkins on the pussy willow or the beginnings of the buds on the trees.

I enjoyed my walk today.  It was cold and gray and so overcast that the sun hasn’t a chance of breaking through, and the occasional snowflake flew by.  Still, it was nice to be back on my home turf, muddy and boggy and all.

View of the pond by the cattails

Although I didn’t spend a lot of time thinking about it, I did wonder what changes we would find when we returned home.  Sometimes, if we time it just right, a week or two away results in dramatic differences from the time we left until the time we returned.  There was nothing too dramatic, but there are quite a few small changes happening.  The trees are taking on that red aura they get just before they bud.  The red-winged blackbirds mentioned earlier have added their song to that of the birds who wintered here.  There are more crocuses in bloom.  The tulips are pushing their way up, as are the daffodils, especially those back in the woods. 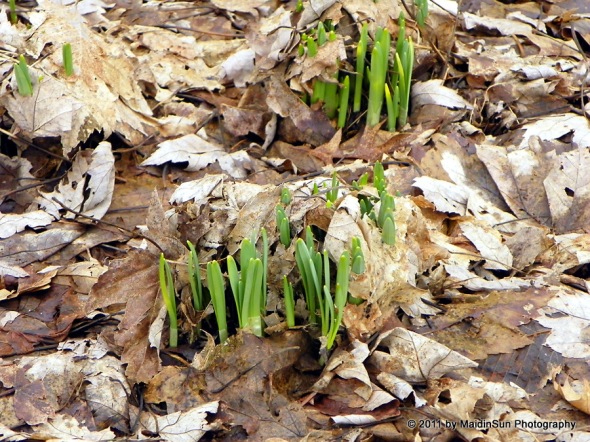 Pushing up through last year's leaves

It’s obvious we had a lot of precipitation while we were away.  The pond level is high.  The woods are a mess, half covered in the creek that has taken over back there.  It looks as though a goodly amount of water went rushing through one section of the woods, pulling over a few trees as it went by.  We’re still under flood warnings in this part of Ohio.  M and I noticed how high the Cuyahoga River was on our way home yesterday.  I’d like to get out sometime this week and have a look at some of the other creeks in the area.

There is still a little ice hanging on in the cooler, almost always shady spots.  Small piles of snow from the plowing are still dotting the driveway and road.  The usual boggy spots are boggier than ever, rivulets running down the hills and into the pond.  The pond itself has thawed completely, not even a hint of ice around the edges.

I also spotted the frog with wings.  It almost looks like he’s getting ready to kiss the bud on the tree.  M moves this guy around once in a while.  There are times I think he does it just to see if I’ll notice.  This was not an easy move to spot as the frog is a little ways up and nestled in a tree.  If I hadn’t been looking up at the birds, I might not have noticed him at all.

It’s not as warm, sunny, and colorful as Florida is right now, but it’s home and I’m glad to be here.  The warmth will come eventually and the colors will come along with it.  Watch this space as winter departs and I follow spring as it makes its presence known around the pond.

For those of you already missing the warmth and brilliance, I’ll still be posting the occasional Florida shots as I make my way through them.  I have a series that I hope worked out well for Scott Thomas‘ latest photo assignment:  Close Up Photography.  I haven’t had a chance to get a good look at them yet so we’ll see.  I won’t tell you what they involve but will tell you it doesn’t include the usual flower suspects.

If you have a camera, any camera, join in on the fun.  Just follow that link to the assignment.  While you’re there, read up on Close Up Photography 101.   Then get out there, take some pictures, and submit your link or links.