(A view of Cleveland and Lake Erie from Lakewood Park.  Lakewood, Ohio.)

We went north yesterday.  An hour north, to be almost exact.  For the past few years friends have been inviting us to attend the Ogrefest at The Brew Kettle in Strongsville, Ohio.  We usually decline because of the hour-long drive.  The Ogrefest is, after all, a chance to sample a variety of good beers and who wants to drive all that way to get home after a few hours of sampling beers?  Bad idea.  Really bad idea.

For those that don’t know, I used to brew beer (at home).  M does it now, when he feels like it (which hasn’t been too often lately but we’ve both been vacationing from beer).  We enjoy sampling beers at places that brew their own, especially hoppy beers such as IPA’s.  So that was one reason to go.  Getting together with friends was another reason to go.  And…  I have a pair of Shrek ears.  Where else could one wear a pair of Shrek ears that would be more appropriate than an Ogrefest??

(Accurate depiction of what your eyes look like the morning after.  Shrek ear in the background.)

So we did a little planning this year and decided to go.  We had enough points at a certain hotel franchise for a free night and there happened to be one of those hotels close to the Brew Kettle.  We parked the car, checked in at our hotel, and took a cab to the Brew Kettle where we had a great time with our friends.  Thank you, friends!

As a result of the Shrek ears, I met a guy who said he couldn’t resist coming over to talk to me.  If I’m ever single again (hope not!), I now know how to pick up men. Wear Shrek ears.  One of the Brew Kettle folks said he should give me a vest to wear and call me Ms. Ogrefest.  I thought that was hilarious.  I’ve never been a Ms. (or Miss or Mrs.) anything other than as the wife of M. 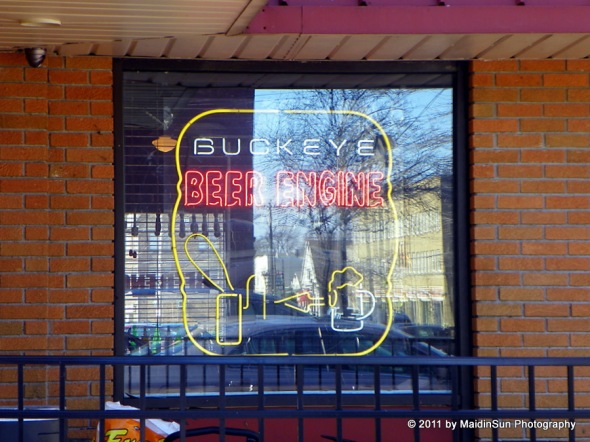 (The Beer Engine in Lakewood.)

We’re out of practice when it comes to that sort of evening out.  I was feeling a little rough around the edges this morning.  The plan was to go further north to Cleveland to do a little shopping at the West Side Market and then make our way south and do some more shopping along the way at places we usually visit about twice a year (Trader Joe’s and Whole Foods being two of those places).  Because we were fairly close to Lakewood, I also wanted to stop by a store there to look at Vibram FiveFingers.  I like the pair I bought last summer and want another pair that I can wear on the treadmill and to just walk around in when I go out and don’t care that I’m wearing shoes that look like Shrek feet.

We decided to skip the West Side Market but we did go to Lakewood.  I bought a new pair of Vibram FiveFingers (the women’s Sprint, if you want to know).  While we were in Lakewood we decided to check out the Buckeye Beer Engine.  Not necessarily for the beer (although a little hair of the dog didn’t hurt).  Some of our friends keep recommending the place, and their menu looks good.   The food was excellent.  I especially like their blue cheese slaw.  I may try to duplicate that at home.  It was one of the best versions of coleslaw I’ve ever tasted. 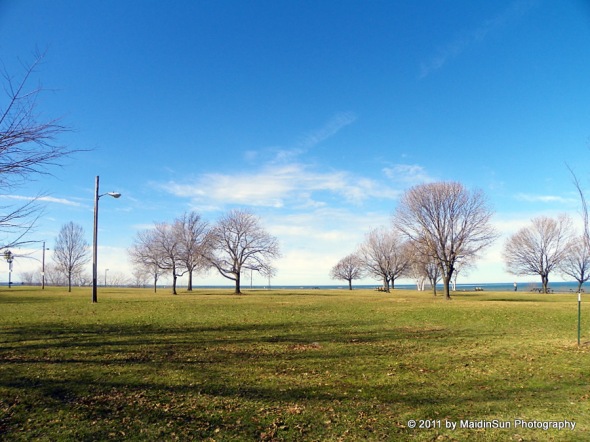 The city of Lakewood, Ohio is located along the shore of Lake Erie.  It was such a beautiful day and we were so close to the lake that we had to go have a look.  It’s amazing what a difference a few weeks and some warmer temperatures can make! 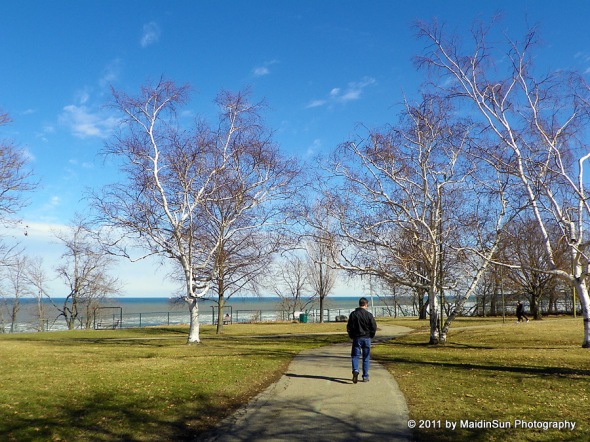 (Walking towards the lake.)

I don’t know how far out the thaw goes, but it looks like it’s pretty far out there.  There is still a lot of ice near the shore, the opposite of what we’re seeing here with our pond (the edges are thawing first).

(Ice near the shore.)

We walked around out there for about a half hour.  It was quite windy but even so, much warmer than we expect it to be this time of year.

(Cleveland skyline in the distance.)

There is an excellent view of the Cleveland skyline from Lakewood Park.  Lakewood is about 10 miles from downtown Cleveland, and appears to be a nice community with plenty of shops and restaurants.  I could see myself living there.  But I bet it gets pretty brutal there when it’s cold and the wind is whipping off the lake. 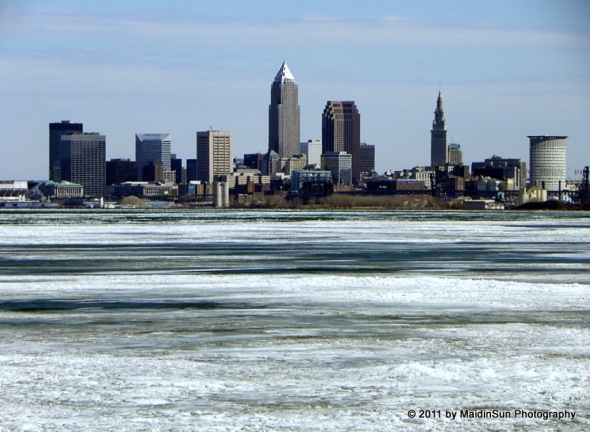 (Yesterday’s view of the pond.)

I skipped the early rising and yoga practice this morning.  I just couldn’t do it.  There are some people who sleep better after imbibing.  I am not one of them.  It tends to keep me up most of the night, almost as if I had a big shot of caffeine to go with it (which I did not).

As Scarlett O’Hara was fond of saying, tomorrow is another day…