(Walking on the pond.)

Today we’re having the kind of weather that afflicts us with spring fever.  It’s in the 40s, which feels almost warm enough to break out the summer clothes.  Well, okay, maybe not quite that warm.  There is a brisk wind blowing, keeping things just slightly cooler than it feels like it should be.  The air smells fresh with the slightest scent of false springtime perfuming it. 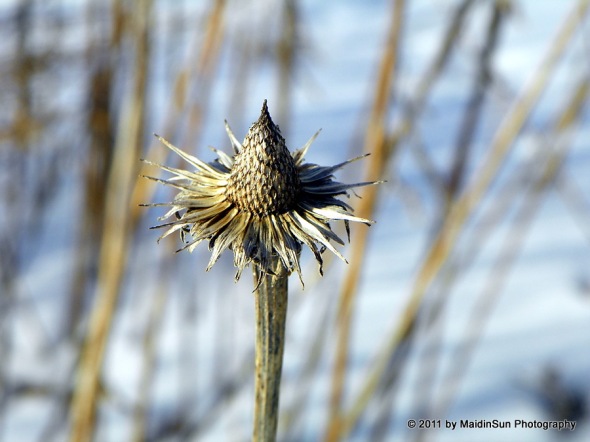 There is so much melting and thawing going on that it sounds like there is a river running under the snow pack.  The birds sound happier than usual, and we had a most unusual visitor join us for lunch.  It was doubly unusual since this particular creature — the opossum — is nocturnal.  Perhaps the warm up confused the poor thing.

(Heading towards the woods.)

I first saw our visitor while M and I were having lunch.  It waddled up to the kennel/cage we use as a platform for one of the bird feeders.  I think it was trying to get to the suet hanging on the outside of the cage, but it walked into the cage instead and couldn’t figure out how to get to it from there.  After spending about five minutes trying to dig under the cage, it gave up and walked off to one of the bushes near the house.  I thought that was the last I’d see of it.

I went out for my walk shortly after that and guess who I met along the way?  It was our lunch guest, the opossum, strolling in the center of the pond.  It eventually made its way to the woods, but I had plenty of time to watch and take photos.  I don’t think it even noticed me there. 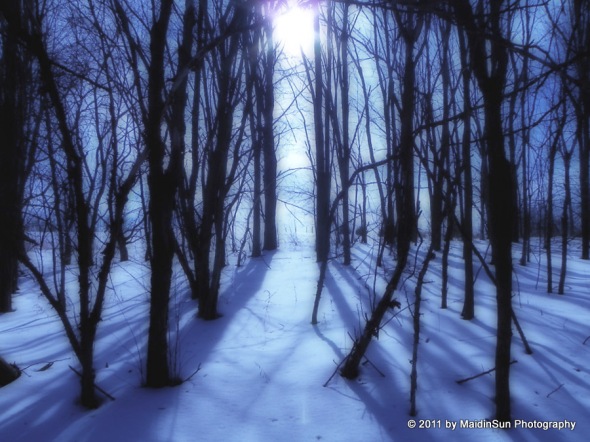 I was in the woods shortly before spotting the opossum on the pond, having fun with different settings on my camera.  I mostly played with the white balance. 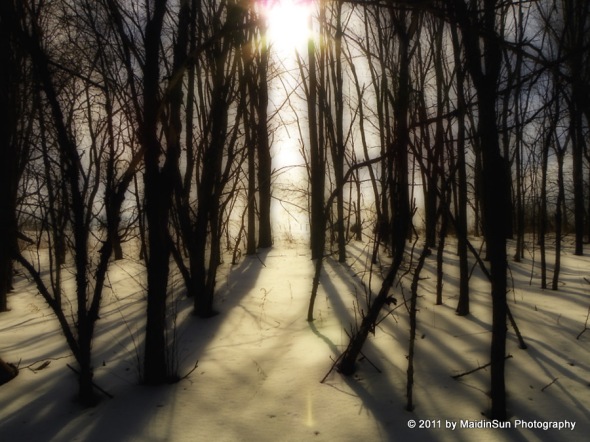 The first photo of the woods was taken with the white balance set to tungsten.  For the second photo I used the open shade setting.  I also fiddled with both in Photoshop because I’m working on a series with an otherworldly feel to it.

Today is day 3 of the 10-day challenge.  I did not want to get up at 6:00am.  Nope.  Not at all.  I hadn’t slept well and wanted nothing more than to try to sleep for a few more hours.  I finally made a deal with myself.  In exchange for getting up and meeting my yoga commitment for the day, I could take a nap later.  Sometimes you have to bribe yourself with something sweet, like a nap.

The yoga was good.  I did a hip opener series, something I badly needed.  All the cross-country skiing is good for building muscle in the lower body, but not so good for flexibility.  I felt much better by the time I finished. 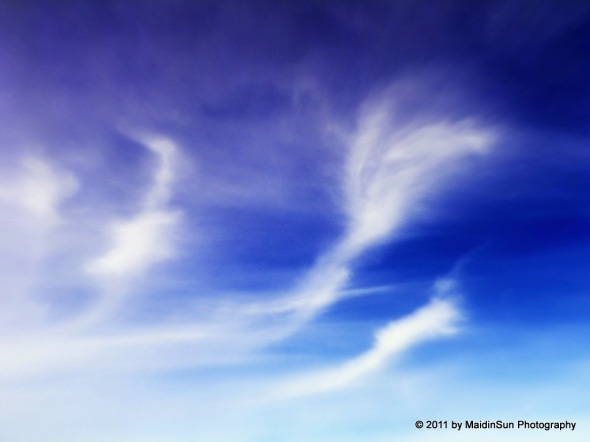