The Daily Post now has a weekly photo challenge.  This week’s theme is Boundaries.

Dictionary.com defines a boundary as  “something that indicates bounds or limits.”  This sign, for instance:

It is posted at a boundary and it sets limits.  It’s one of several signs we posted a few years ago after waking some mornings to find strangers fishing our pond.  We had to set some sort of boundaries and limits because it was getting out of hand, with friends of friends of friends inviting other friends of friends of friends over to fish.  What made it worse was that some of those folks were not very conscientious about their trash, leaving it wherever they happened to be standing when they finished with whatever they were throwing away.

Since there are no rules regarding using a new photo (just in case — the first photo is a new one, taken after the challenge was posted), I also have some old photos with boundaries that I want to share.

These were taken at the Cleveland Botanical Garden one rainy day last May and are good examples of how boundaries are used in gardens.  (Click on any of the photos to see the slightly larger version.)

Of course the gardens here are much fancier than anything you’d ever see in my yard.  I’m too lazy when it comes to gardening to create anything this elaborate or nice. 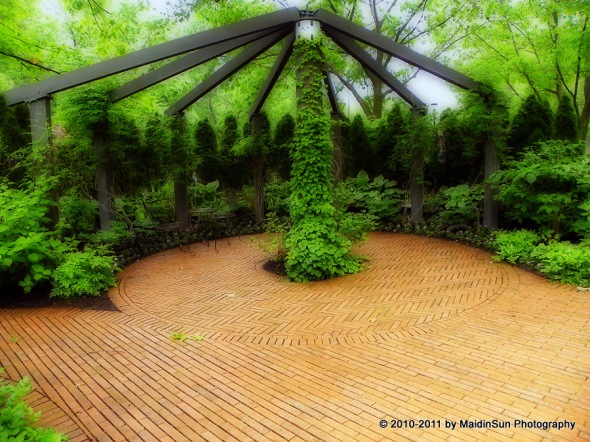 That’s one of the reasons I enjoy visiting gardens.  It allows me to imagine all the wonderful things I would do if I could hire a team of people to come out to our property and turn it into a series of gardens, courtyards, terraces, and other landscape design marvels.  Maybe someone from HGTV will see this, think of Breezy Acres as a dream job or as a good challenge, and volunteer to come out and landscape the place.  (Added incentive:  I will gladly follow you around with my camera and blog about the wonderful transformation of our property.  I know you HGTV folks have your own cameras, but this might be something new, having an amateur photograph and blog about all the hard work you do.)

Then again, we’ve worked hard to maintain some naturalness to Breezy Acres, allowing meadows to grow as they will rather than mowing everything down, leaving downed trees where they fall in the woods so they can become nurse logs, and trying a number of natural things to cut back on the pond weed problem.   Seems a shame to turn it all into some kind of formal gardens. 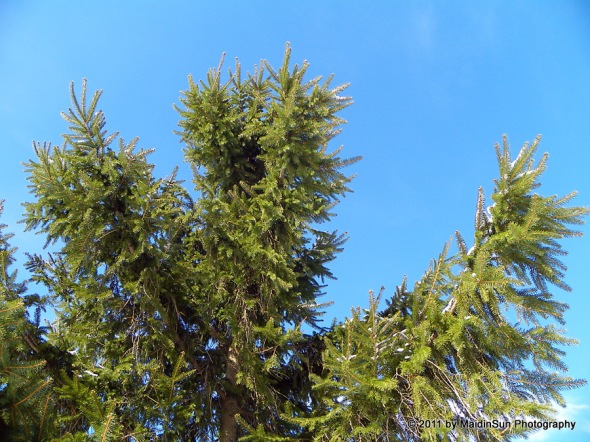 (A Norway spruce, branches raised in joy at seeing the blue sky and sunshine.)

I have to admit that it looks prettier than the reality of being out there.  The wind is whipping in what seems to be every direction at once at times, causing snow dervishes when it can’t make up its mind and shooting the snow out horizontally when it chooses a direction. 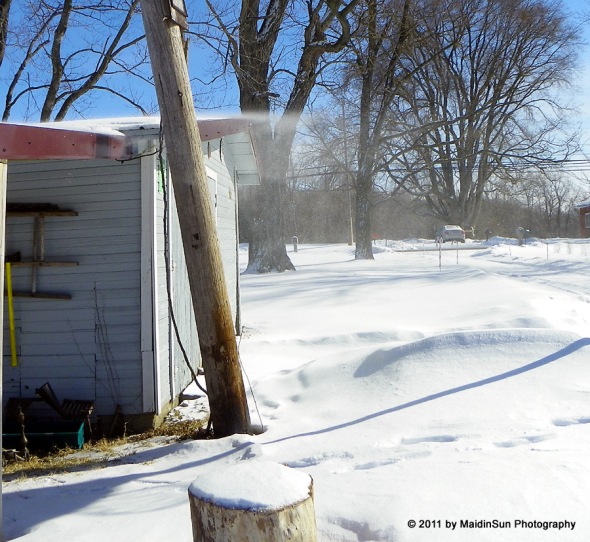 (Snow blowing off the roof of the barn.)

I was so cold by the time I started making my way back to the house that I kept wishing for one of those cartoon Saint Bernards to come along, carrying a little barrel of brandy to warm me up.  It’s invigorating out there, to say the least. 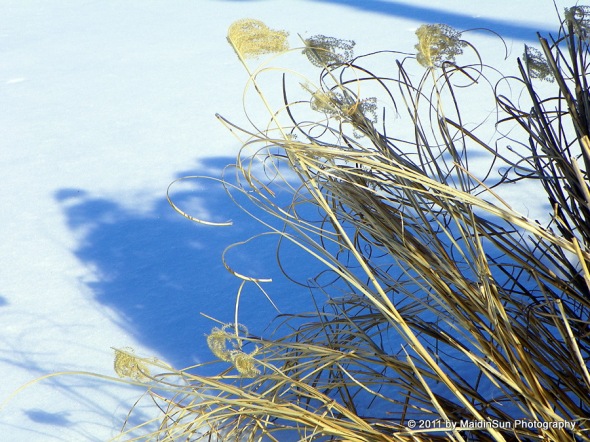 The clump of ornamental grass pictured above is usually upright.  The wind decided to drive it towards the ground.  I often wonder how the birds manage to fly when the wind is as strong and contrary as it is today.

Speaking of birds, the male cardinal continues to tease me, showing up usually when I don’t have my camera handy and taking off as soon as I’m ready to take a shot of it.  Pfffft!!  I did catch the female cardinal in one of the nearby trees yesterday and have decided this is probably the best I’m going to do.  Not that I’m giving up, mind you.  I will keep trying.  I’d really like to catch him sitting in one of the spruce trees as his red really stands out against the dark green of the pine needles.

Today’s CD:  Dead Can Dance, Toward the Within

Dead Can Dance is an Australian band formed in the 1980s.  I’m not sure how to describe their music.  A lot of people describe it as spiritual. Listen to Cantara, one of the songs from the CD I listened to today.  The music starts about 47 seconds into the video.

That’s about it from the Bogs for today.  I’ll leave you with a collage of views of the pond. 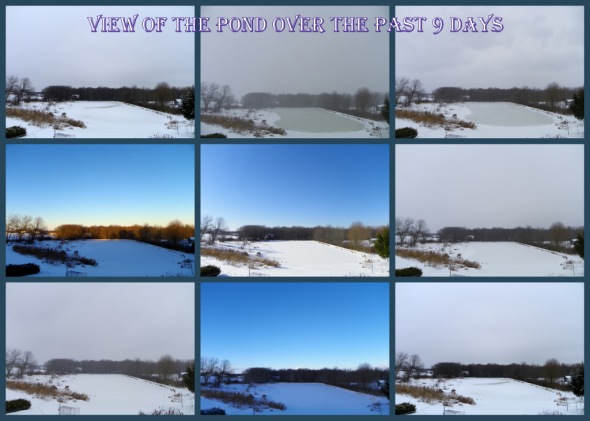