I have all these critters in my photo archives who suddenly want to come out and play.  It makes me wonder why I take the photos if I’m just going to let them sit on the hard drive.  It’s time to bring some of them to the blog.  Just for fun.

I took this one at the Akron Zoo when we were last there with our oldest granddaughter, the Exquisite Emma.  It was the year the baby snow leopards were born (2007).  I didn’t realize it had been so long since our last visit.  This might be the year to go again.

Orishas is a Cuban hip hop group, influenced (obviously) by the hip hop movement as well as Cuban and Latin rhythms.  A Lo Cubano was released in 1999.  You can listen to one of the songs from A Lo Cubano here.  (The link takes you to a video on YouTube.)

This CD had me dancing around the house.  It would be impossible not to dance or move in some way while listening to the Orishas.  I’m sure of it.

(Warm and fuzzy with snow.)

I was going to wait to go out when M got home from work since he’ll probably go skiing.  But I already put in a 5-mile walk/run this morning (on the treadmill) and thought a leisurely stroll back to the woods was more my speed this afternoon.

The snow is all fresh and white and clean again.  It has been coming down all day.  The snow is falling slowly, softly, gently, almost floating.  While walking to the woods I had a brief flash of apple blossoms drifting on a gentle spring breeze.  It was nice to feel/sense that touch spring, if only in my mind.

(Queen Anne’s Lace captures… well… you get the idea.)

I disturbed a pair of ducks (mallards) when I slid down the hill to the creek.  I didn’t even notice them until they took off, startling me.  I noticed while they were in flight that they are almost the same color as the creek looks right now. 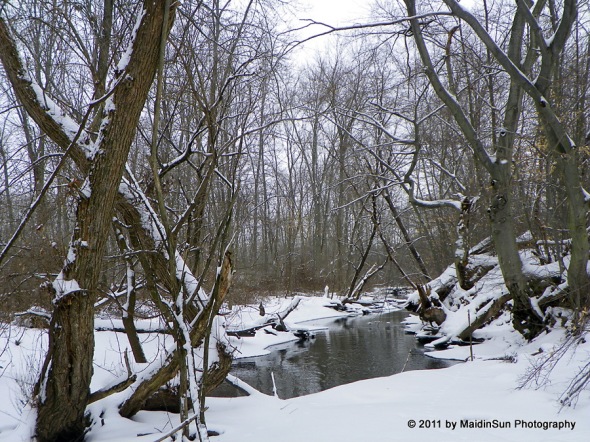 (The mallards were here.)

A chevron of geese flew over as I was making my way up the hill towards the house near the end of my walk.  I stopped for a few minutes to watch and listen.  They were heading east.  Perhaps they’re looking for the sun.

(Prayer flags in the woods.)