It is also another of those days when my outdoor adventures were taken up with running errands and doing chores (shoveling snow, feeding the birds, hauling stuff around).  Even if I had gone for my usual walk around the pond, I would not have taken the camera with me.  I overexposed my hands (particularly my right hand, especially my right thumb) to the cold yesterday morning while taking pictures of the frost.  It’s no big deal but I’m trying to keep my hands warm for a few days.

M and I did go cross-country skiing late yesterday.  We went north to the Chapin Forest Reservation where they have groomed trails for cross-country skiing.  It was fun.  It was also more work than I expected it to be.  I’m not sure why other than being out for twice as long as usual.

I’ve been going through Ye Olde Archives to pull out some photos for a couple of projects I’m working on.  Since I have no new photos to bring to you today, I thought I’d put up a few of my old favorites.

M and I went to Assateague Island in Maryland back in February of 2007 while off on our sabbatical adventures.  I was hoping we’d see at least one wild horse while we were there.  We were very lucky.  We saw several, including some babies.  I took a lot of different shots of the horses.  The one above is my favorite because of the textures.  It’s been edited in Photoshop but I lost track of what I did.

(Strolling through the gardens.)

I took this colorful photo at Longwood Gardens in Pennsylvania sometime in April of 2008.  It was pure luck, coming around the corner to this scene and being quick enough with the camera to capture it.

This was my first Fun with Photoshop photo.  A friend made a video with instructions on how to do selective coloring.  She explained it all so well that even I could do it.  lol!  Those familiar with my garden and my lazy gardening techniques know that I often have some beautiful weeds growing amongst the vegetables.  Sometimes they are so pretty I don’t want to pull them.  I am becoming more aggressive and ruthless about the weeding each year as I’ve learned that when the pretty weeds go to seed, it means more of them the next year.  This beautiful little flower (and spot of clover) were growing in the asparagus bed in August of 2008. 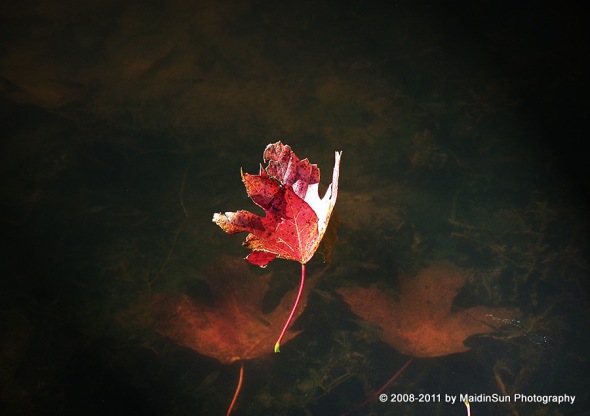 I took this photo of three leaves here at Breezy Acres during the autumn of 2008.  I like the crispness of the newly fallen leaf above the ghost-like appearance of the two leaves under the water.

(Framed in the woods.)

I can’t finish this up without a couple of photos of my favorite subjects.  My granddaughters, of course.  This is Miss Maddy, determined not to look at me.

And finally, a photo of Miss Emma, playing in the rain.  I had a difficult time picking out photos of the girls as every photograph I have of them is a favorite just because they are in them.  I decided on the moodier pics for no particular reason.

I just glanced out the window.  Looks like the predicted snow storm has arrived.  The snow is coming down fast and steady.  The birds are congregating in large numbers at the feeders, trying to fatten up before they get snowed in.  Reminds me of the rush at the grocery store for milk and bread.  They were almost out of skim milk at the grocery store where I shopped today.  I guess people were out early stocking up for this storm.  Or there’s a shortage of skim milk.

Thanks for joining me today.  I will probably have more snow photos for you tomorrow.  Hopefully my fingertips will be feeling much better by then so I can get out with the camera again.  If not that, at least go skiing in the fresh snow.