(To read more about “Monkeys Grasping for the Moon,” click here.)

One of the things M and I did while in Washington, D.C. was pay a visit to the Arthur M. Sackler Gallery to see two exhibits that we thought would be interesting.  The first was Shahnama:  1000 Years of the Persian Book of Kings.  Honestly, that was my pick (not M’s).  The description intrigued me and for some reason I thought it might be similar to seeing the illuminated manuscripts we saw at the British Library in London.  It was, in a way.  I’m fascinated by books, all books.  Ancient.  Old.  New.  Yep.  All books.

We arrived at the Sackler Gallery at just the right time.  When we asked at the information desk about the exhibit we were in turn asked if we would like a tour.  After we responded in the affirmative, a docent led us off to the exhibit and spent quite a bit of time telling us the story of the books as well as the stories told in the books themselves which recount the myths, legends, and history of Iran.

I enjoyed the stories while M, being more visual, enjoyed the art itself.  The pages of the books displayed are about the size of the pages in a coffee table book or large bible (portrait orientation), and to experience the intricacy and details of the artwork you need a magnifying glass.  It was pretty amazing.  I also found the period and stylistic differences interesting.

We also saw Perspectives:  Hai Bo at the Sackler Gallery.  The exhibit consists of five large-scale photographs from Hai Bo’s Northern Series which, among other things, shows the changing seasons in one place.  The reasons for my interest in this exhibit are:

I’ve been photographing similar views of the pond here at Breezy Acres ever since I got my first digital camera.  When M and I were off on our sabbatical adventures I became interested in photographing one particular tree during the various seasons, but we were there for only three of the four seasons so I missed one.

(In the garden behind “The Castle.”  Washington, D.C.)

To sharpen my knives more often.

More than a few weeks ago, M and I borrowed a sharpener from friends so we could hone our knives.  When it comes to food preparation, I do a great deal of chopping, dicing, mincing, and slicing.  It’s pretty much a requirement when one is pursuing a healthful, almost-vegetarian lifestyle.

Would you believe I have never had my knives sharpened?  Yes, it’s true.  Never.  I use the wand-like thing that came with the knives, and I have thought about taking them to someone and having them sharpened, but never got around to doing it.  While celebrating Thanksgiving with our friends in their home (thank you Chris & Jeffrey!) I mentioned this amazing factoid about my cooking life and, being good friends, they loaned us their sharpener.  (And hey, C & J, we need to get together again soon so we can return the sharpener!)

So.  We used the wonderful sharpener and my knives are now wonderfully sharpened.  Cutting through vegetables is almost like cutting through butter.  It’s that easy.  I’m afraid I will quickly dull the knives again by using too much force, something I got used to doing with less-than-sharp knives.

This experience was a good reminder to me that if I want my tools to work well, I must keep them honed and in good condition.

We were supposed to have snow here today.  There might have been snow somewhere around this area but nary a flurry was seen here at Breezy Acres until late this afternoon, near the end of my walk. 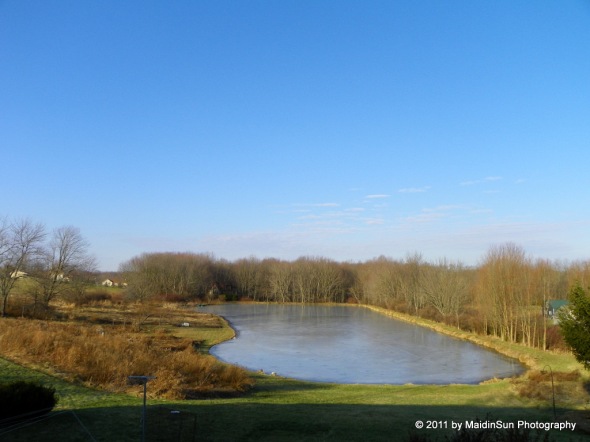 The day started out sunny but by 2:00pm it was dark and cloudy.  By 3:00pm the first of the flurries flew by.  The snowflakes were few and far between.  Widely scattered is probably the best way to put it.

(Blowing in the wind.)

Today was one of those days when I had to stretch to find something to photograph.  I feel as though I’ve been taking pictures of the same things over and over and over to the point of it becoming boring.  The good thing about it, I suppose, is that my eyes are getting a good workout.  Good enough that I was able to spot this feather which, unlike the objects in the side mirrors of a car, is in actuality smaller than it appears in this photo.

(Cattails and tree reflections on ice.)

And that, my friends, is about it from The Bogs for today.  See you again tomorrow!