Last week I blogged about supporting the economy by buying local and supporting your local businesses.  My lovely daughter-in-law stopped by with a comment and a link about The 3/50 Project.  I had not heard of it.  Thank you, Merdi, for the info and the link.  If you have not heard of it, or you have but you’ve forgotten about it, please take a moment or two to check it out.  Even better, participate if you can.  It’s a wonderful idea. 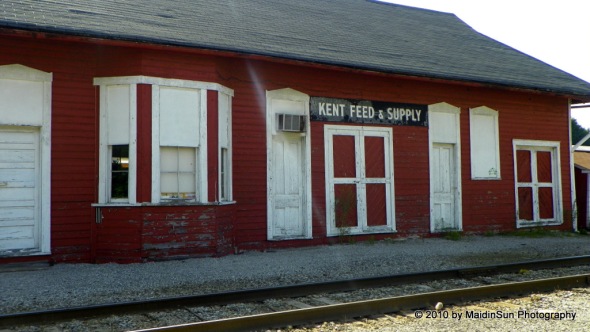 As you know, my weekend was filled with beans and the processing of beans.  But it’s not all work and no play around here.  Sometimes it’s a combination of the two. 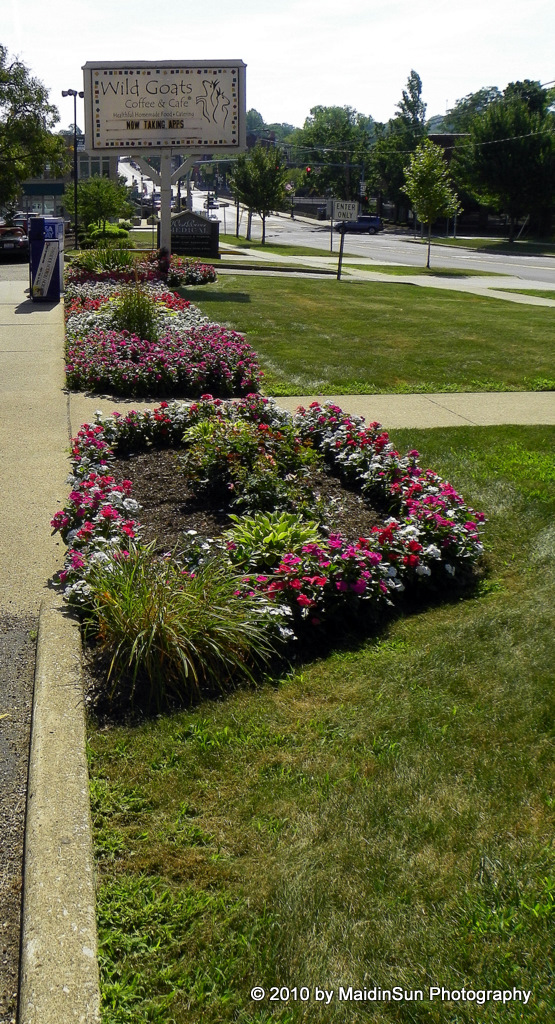 The car was due for its 30,000-mile check-up/tune-up.  M scheduled it for Saturday morning.  I decided to go along to keep him company and because he enticed me with a walk in Kent and breakfast at Wild Goats Café.  It beats sitting around in the waiting room at the car dealership (even if they do have coffee and donuts, a large screen television, and plenty of periodicals to read).

The walk from the dealership to Wild Goats Café is exactly one mile.  It was a nice little walk mostly on Main Street heading into Kent.  The morning was sunny, hazy, and very warm but there are plenty of trees to provide some shade and there are actual sidewalks to walk upon (something we don’t have out here in the country).  By noon it was feeling more hot than warm and we appreciated the shady spots even more than when we started out. 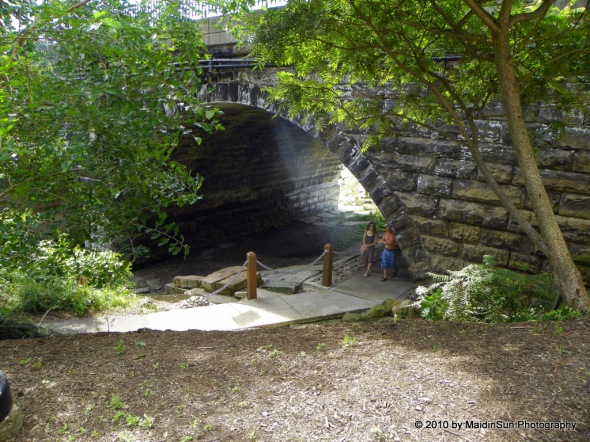 After a delicious breakfast (with plenty of iced tea) at Wild Goats, we walked over to the Franklin Mills Riveredge Park which is only about a block away from the café.  The park follows the course of the Cuyahoga River through Kent and is named after the original settlement along the river.  You may have heard of the Cuyahoga River.  It’s famous for having caught on fire in the late 1960’s.  It was at one time known as one of the most polluted rivers in the U.S.

It has always been my opinion that the shortest, easiest, and least expensive communication with the invaluable back country would be to let the courses and the distances be taken to the mouth of the Muskingum and up that river to the carrying place to the Cuyahoga, down the Cuyahoga to Lake Erie. 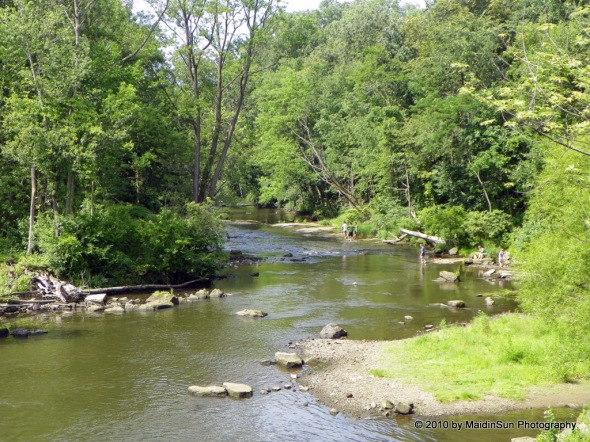 Cuyahoga River on a sunny Saturday in July

The name Cuyahoga means “crooked river” in the language of the Iroquois.  It is indeed a crooked river, as you can see from this map.  The water quality has improved over the years thanks to a lot of hard work from a lot of hard-working people and, as far as I know, the river has not caught on fire since the 1960’s.  (For those interested in such things, Great Lakes Brewing Company has a beer which I think was named for the Cuyahoga River:  Burning River Pale Ale.  It’s an excellent and wonderfully hopped ale.)  Areas that were once devoid of fish now support 22 species. 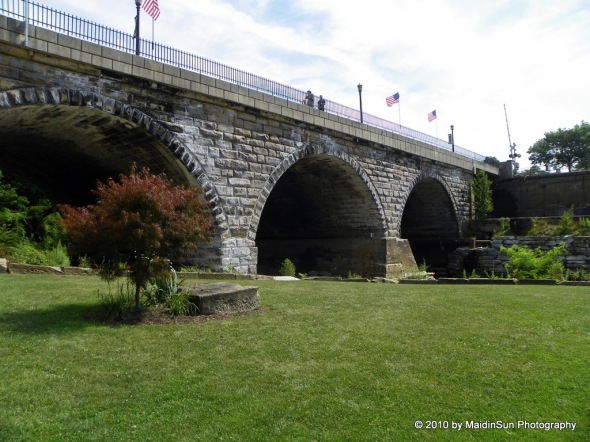 The park has seen a lot of improvements since we moved to this area ten years ago, including the bypassing of the Kent dam (something that was not without controversy).  One of the problems with the water quality in recent years has more to do with stagnation due to the dams along the river than it does with pollution (although I should point out that pollution continues with urban runoff and sewer overflows being two of the main sources).  If interested, you can read more about the Kent dam project here. 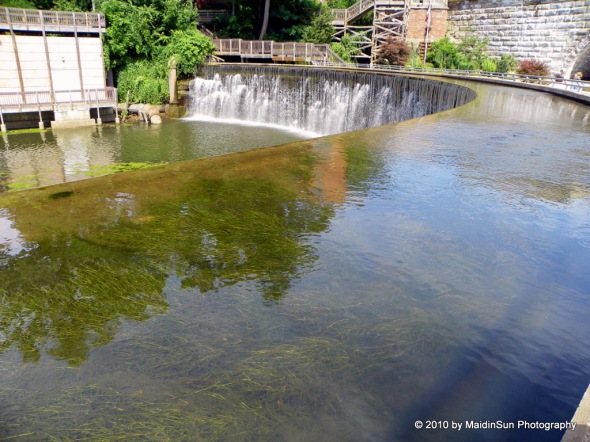 It’s a nice little park.  The dam, constructed in 1836 and having some historical significance (I read somewhere but can’t find it now that the dam is one of the oldest in Ohio), was left intact.  The waterfall was reestablished by pumping recirculating river water through a trough around the lip of the dam. 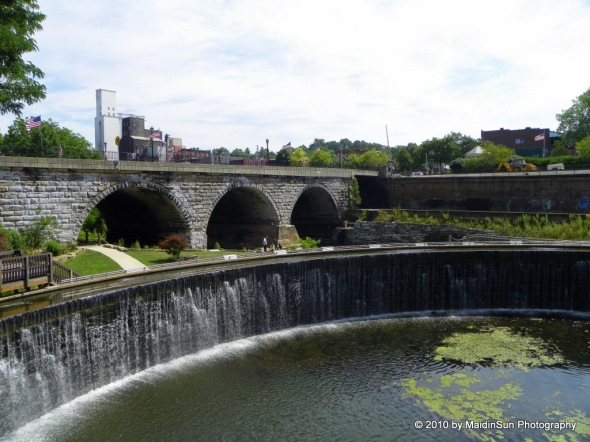 We enjoyed our walk.  There were other people out and about, enjoying the park.  Some were playing in the river, cooling off. 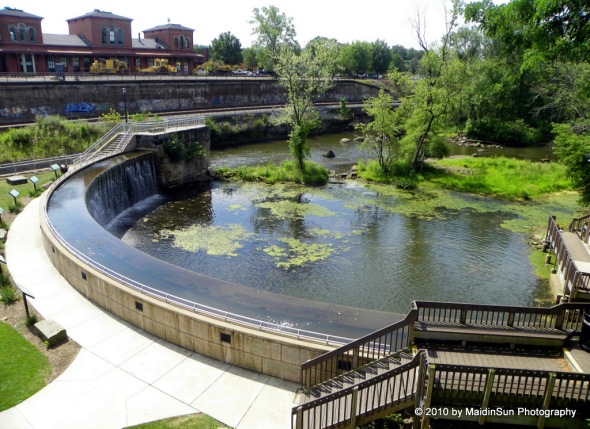 We saw several turtles sunning themselves near the dam area.  The water around the dam seems to suffer from some of the same problems we are having in our pond this year (pond weed and algae, oh my!).  In a way, that was reassuring.  It means our pond weed and algae problems are not unique to our pond and therefore not a result of something we did or did not do. 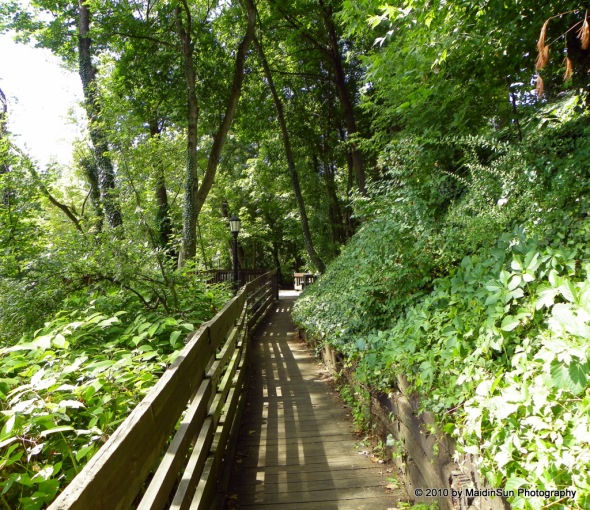 After exploring “Heritage Park” (the lower area that was “created” around the dam area when the dam was bypassed) and reading some of the interpretive signs highlighting some of the history of the dam and river, we climbed the stairs to the observation platforms and walkways. 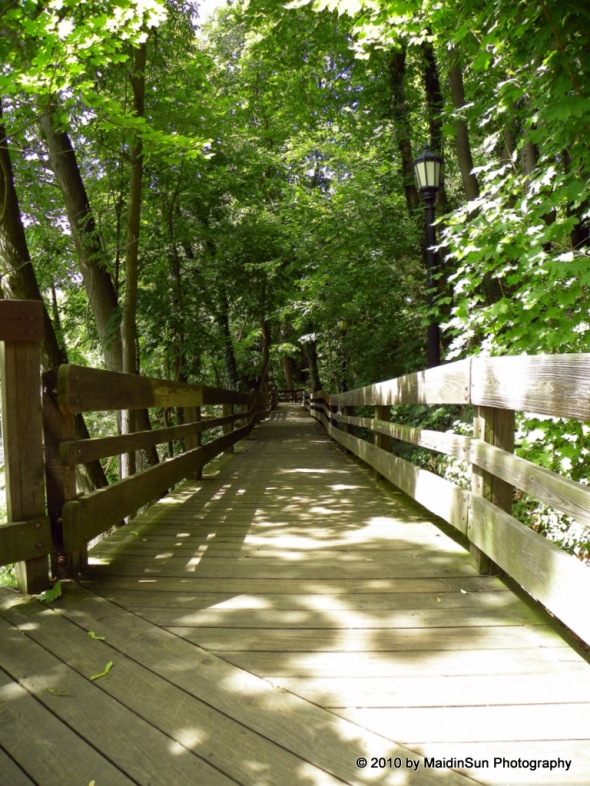 I’m not sure how much more there was to explore as we didn’t stay too long or go too far.  One of the things missing in that area of the park is a public restroom.  I don’t know about you but if I drink lots of iced tea with my breakfast, I’m going to be in need of a loo at some point in time.  So we made our way back to the dealership (where they have restrooms for their waiting customers — a good thing to have if you’re serving unlimited free cups of coffee). 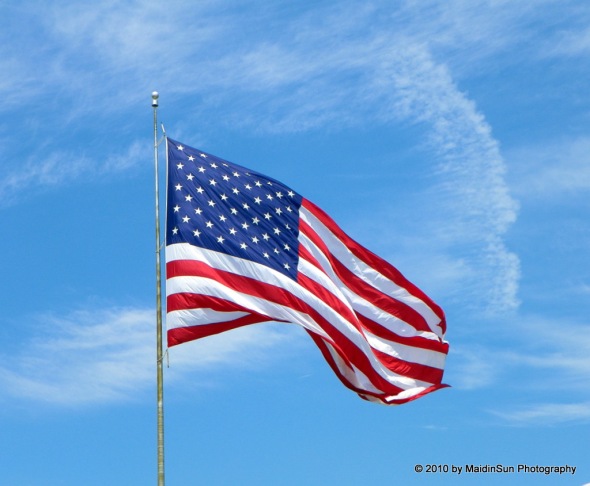 You can tell where the dealership is located by looking up for the giant flag.  I tried a search to find out why car dealerships fly giant flags but was unable to come up with a good answer other than what appear to be guesses such as to catch the eye of the customer in order to lure them in and to show their patriotism (which may be good guesses for all I know).  I wonder if they started flying those behemoths around the time “buy American” became a popular theme in car advertisements?

We picked up the car, went to Hartville Market to see what the farmers had for sale, and then it was back home and back to work.  M did some Project Patio work and I took on the rest of the beans. 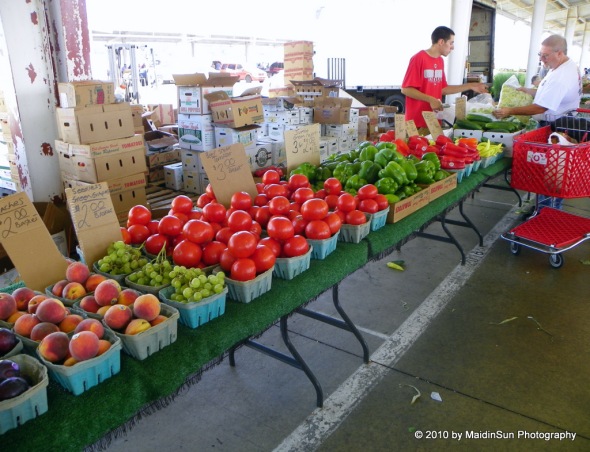 (At the Hartville Market)

I think I would rather have been doing this:

(Summer scene:  Playing in the Cuyahoga.)

But then, the beans wouldn’t have gotten processed and we wouldn’t have had that gorgeous stir-fry for dinner.  It’s all connected in one way or another, isn’t it? 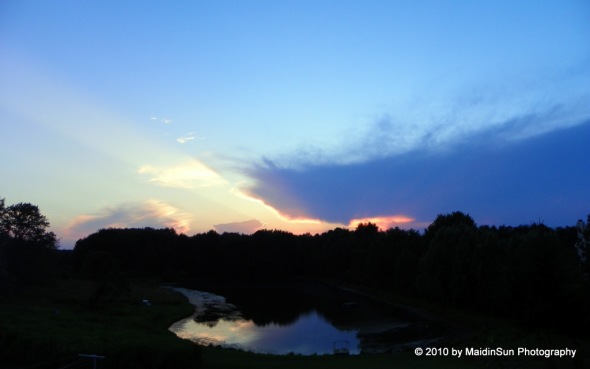 21 Comments on “A Saturday”