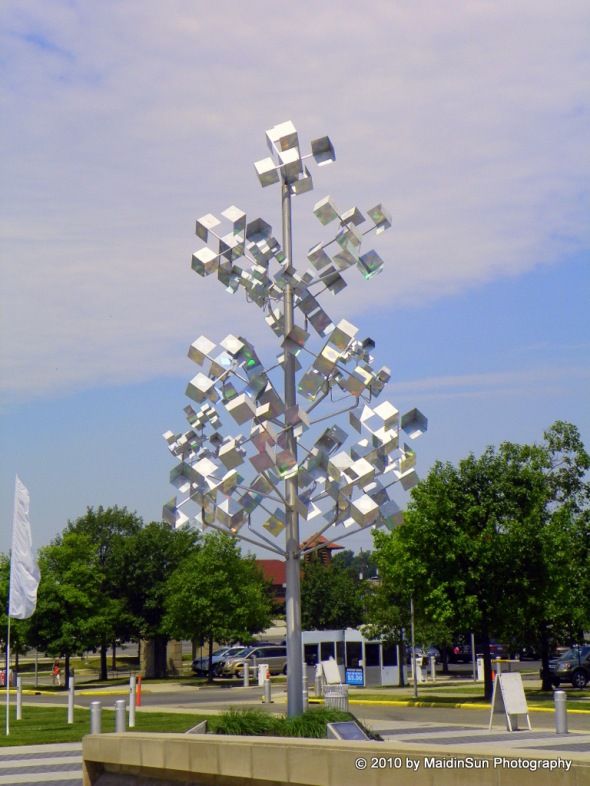 (Sculpture outside of COSI)

M and I went away for the weekend.  The magic of WordPress allowed me to compose my weekend posts ahead of time and schedule them to publish on Saturday and Sunday.  I bet you didn’t even realize I was gone.

We spent the weekend with our oldest son and his family.  Part of the visit included a Saturday morning play date with our oldest granddaughter, the Exquisite Emma.  Emma is five years old now.   She is great fun to have along on a play date.  We went to COSI in Columbus.  For extra fun we brought along a friend of Emma’s.  Her name is Gracie.

Emma and Gracie have both been to COSI numerous times so we let them lead the way, taking M and I around to the things they wanted to do.  M and I have visited COSI numerous times as well.  In fact, you can find a picture of us with our two sons in the Einstein Photomosaic.  I don’t remember what year the photo is from but I think it must be 10-15 years old by now. 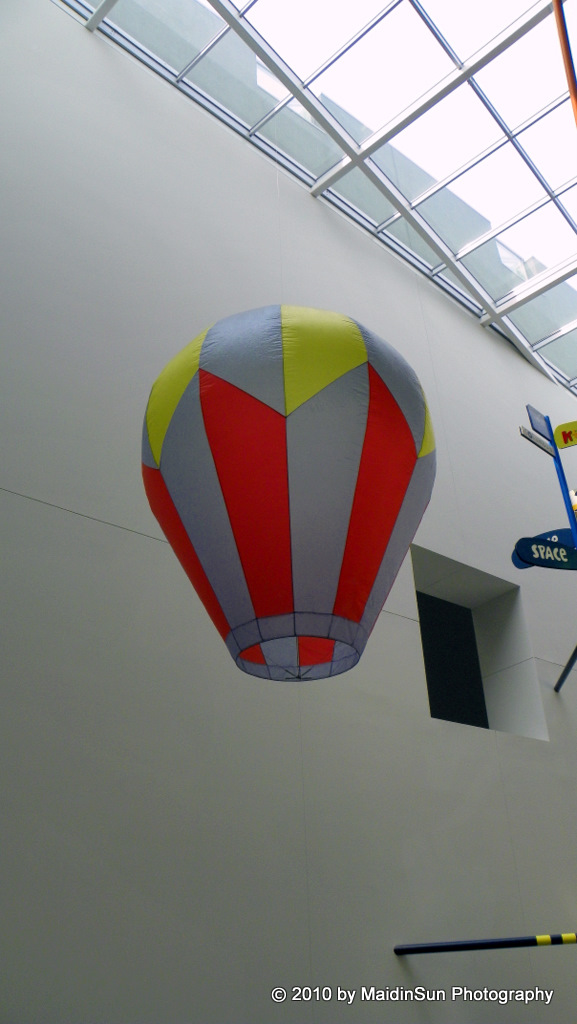 After exploring some of the hallway exhibits (such as the hot air balloons, one of which is pictured above), we went to Little Kidspace.  We played Go Fish in the room for the first graders, where Gracie (who is a year older than Emma) will be able to hang out when she starts first grade in the fall and then moved out to the main area where Emma, Gracie, M and I had a blast playing in the houses and with the puppets and other toys. 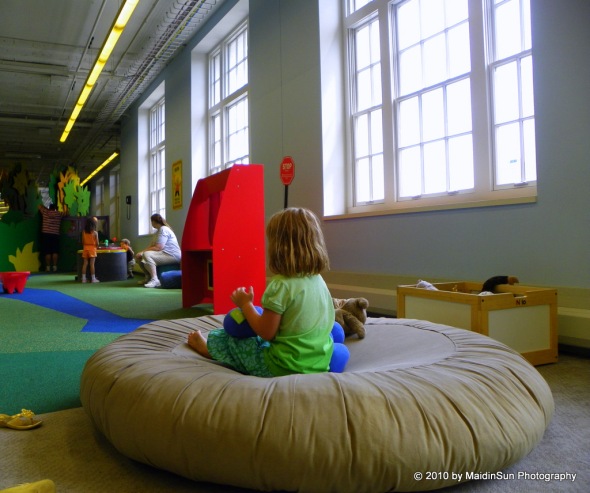 When we finished there, Emma and Gracie took us to the Ocean exhibit where they were able to explore and sit in a small submarine. 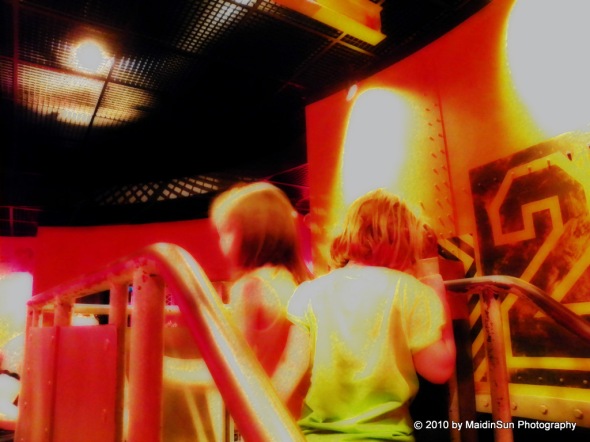 (Gracie & Emma waiting in line for the submarine.)

The Ocean exhibit is dark in places with red and yellow lighting in other places.  It makes for some interesting photographs.  I’d like to go back sometime and check out the other areas in the exhibit with the new camera.  We didn’t make it all the way through because time was flying by and before we knew it, the girls were hungry and it was time to go to lunch. 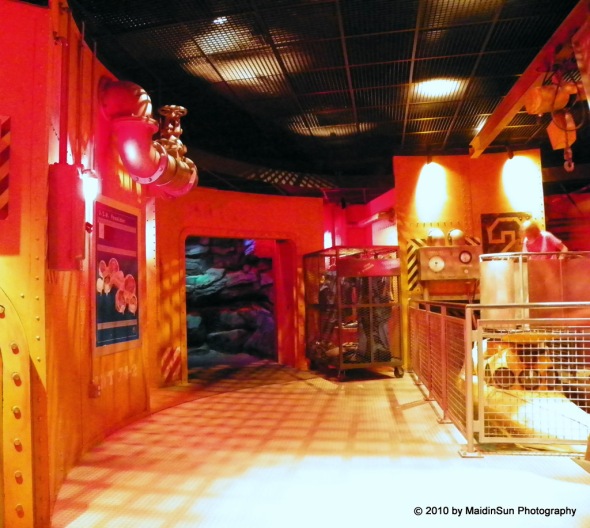 (Part of the Ocean exhibit)

We had lunch at the Banana Bean Cafe.  I like the name of the place.  It sounds like fun, don’t you think?  I did check out the reviews to make sure that they had good food to go with their fun name.  Some of the reviews complain about slow service.  In our experience, both food and service were excellent.  It’s true the food doesn’t arrive pronto but it’s not a fast food joint where the food sits under a heat lamp.  They have to prepare and cook the food.  Our drinks (iced tea for M and I, chocolate milk for Emma and Gracie) arrived quickly and the waitress did a good job of checking up on us throughout the meal so when the need arose for fresh napkins or refills on the tea, she was there to do it.

We started by sharing a plate of the fried plantains.  Emma and Gracie had never had plantains before and both were willing to give them a try.  They seemed to like them at first and then wanted the outer part removed so they could eat the sweet inside without the fried outside.  For entrees, both girls had pancakes.  M and I picked from the Brunch House Specialties menu.  I had the Lobster Hash (“griddled lobster & red bliss potatoes, two poached eggs, green chile Hollandaise, and a simple salad”).  It was scrumptious.  Emma and Gracie were fascinated by the lobster tail that was a little more than a decoration on the plate (it did have some meat in it).

Following lunch we took Gracie back to her parents, rounded up the rest of our crew (Emma’s parents and sister Maddy) and we went to Zoombezi Bay Waterpark where we all had fun in the water.  It was a good day for it since it was hot (in the 90’s) and very humid.  Around 6:30 or so thunderstorms started moving in.  Emma and Co. took off for home while M and I spent a little time walking around the park in the heavy rain that preceded the thunder and lightning.  It’s been a long time since we’ve walked in the rain like that.  It was fun.

As we were leaving the park the sun came out in the midst of the storm, creating a big, bold, and beautiful rainbow stretching out over the park.  We followed the storm for a while, the rainbow always just a little ahead of us.  At one point it looked like we had caught up with it and were going to drive through the colors touching the ground.

I did not capture the rainbow with my camera but do have it in memory.  Taking the camera to the waterpark seemed like a bad idea, as did leaving it in the trunk of the car on a hot and steamy day.  So the camera stayed in our hotel room while we went out to play in the sun and water and rain.

We spent Sunday with the family at their house.  I played with Emma, Maddy, and their mother while our oldest son and M worked on a few home repair projects.  We started home around 2:30 or so and arrived at our house in time for the first of the big thunderstorms of the evening. 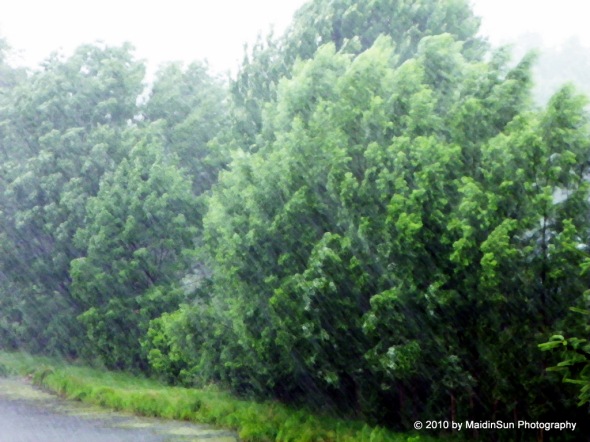 The rains continued throughout the night and into this morning.  We’ll probably get more storms today as a cold front moves in.  I’m looking forward to the drier, cooler weather that is supposed to follow the front. 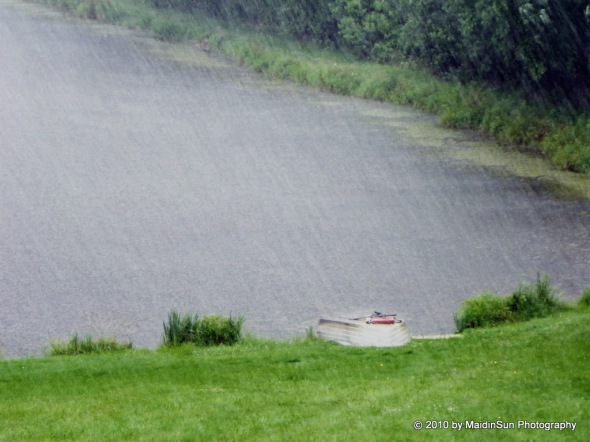