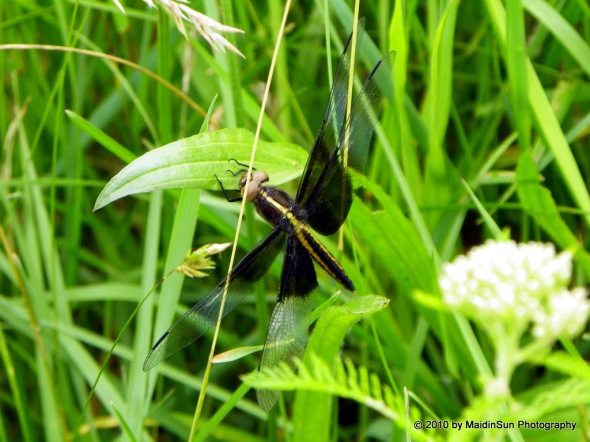 I was out in one of the meadows on Saturday, watching the red-winged blackbirds, when I heard a faint buzzing sound in the high grasses behind me.  I looked and there was a dragonfly.  It is, I think, a female widow skimmer.  Did you know that the compound eyes of the dragonfly have up to 30,000 facets, each one being a separate light-sensing organ which gives the dragonfly nearly a 360° field of vision?  I didn’t.  It was one of those fascinating factoids I found while trying to identify Ms. Dragonfly.  (Be sure to click on the dragonfly for a larger view.  You’ll see more that way.) 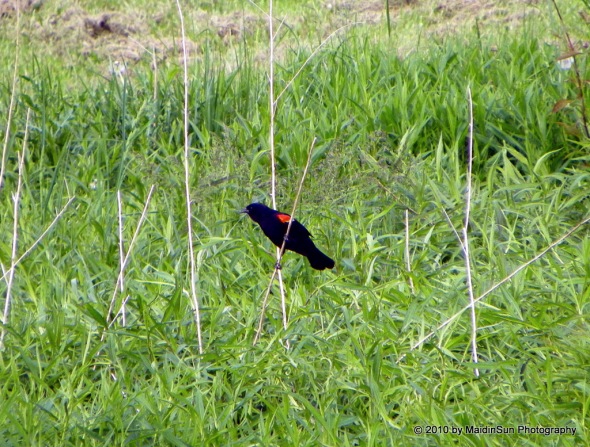 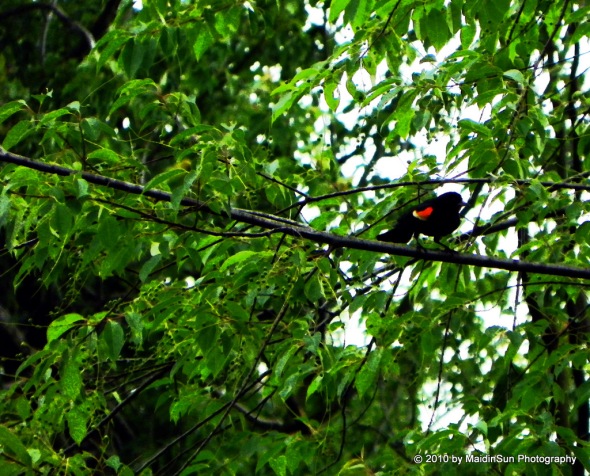 I had a good break.  I didn’t go completely cold turkey.  I posted over at my other blog:  Bountiful Healing.  I post there for attitude adjustments.  It works, most of the time.

I got caught up on some homecaring (cleaning, laundry, various and sundry other chores) and worked in the garden.  I took walks around the pond and property while also taking plenty of photos.  I cleaned up the computer, decluttering My Photos now that I’ve realized I don’t have to save everything and learned that my Photoshop skills are not good enough to save a bad picture.  The decluttering felt good.  I did a little of that around the house as well.  I am learning to appreciate letting go. 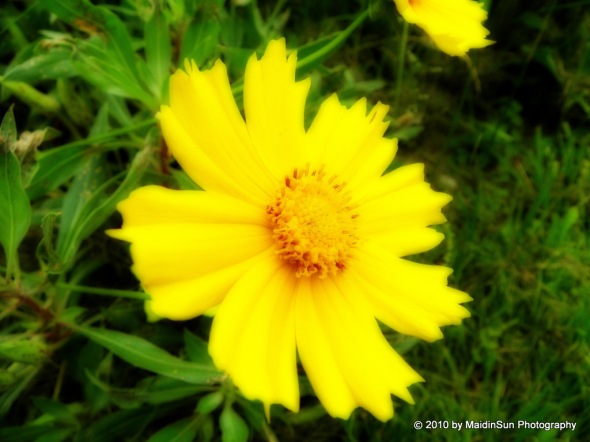 M worked on the trench, filling it in with bricks, mortar, and dirt.  It is no longer a trench.  It is now the foundation for a brick wall.  Much rejoicing!  I know the poor man was getting tired of bailing and siphoning the rain from the trench.  There will be no need for that anymore. 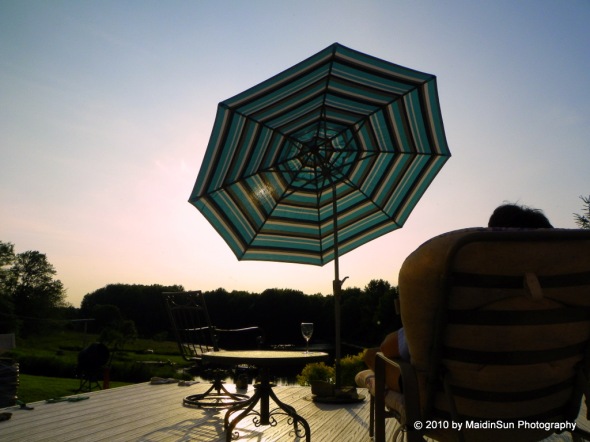 (M relaxing on the deck.)

It wasn’t all work and no play.  We relaxed on the deck, rowed around the pond at sunset, and watched a movie (“Whip It”) and caught some World Cup action (USA vs. England… thank you, England, for giving us that goal). 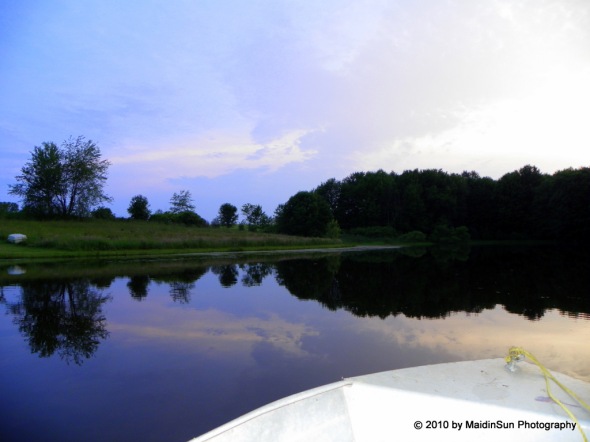 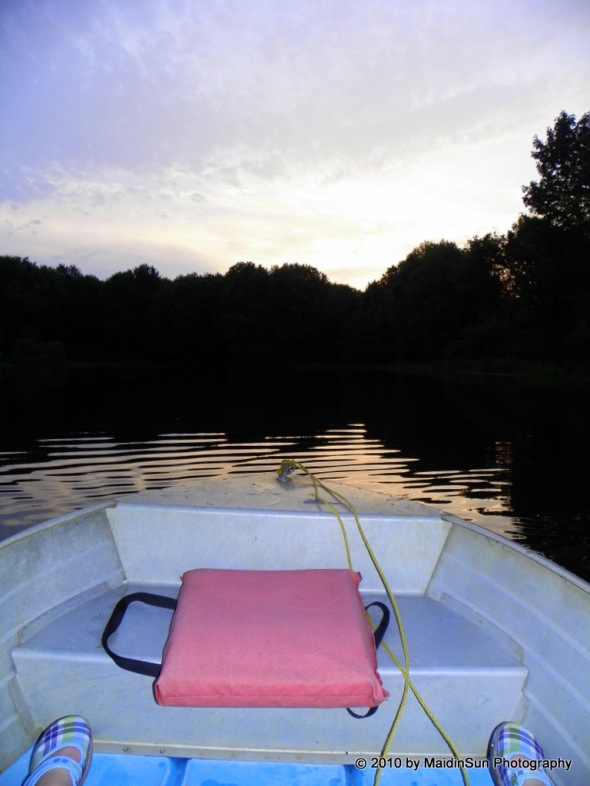 On Sunday we took the 2-1/2 hour trip south to see our oldest granddaughter, Emma, perform in a dance recital.  She was, as expected, magnificent (and oh so cute!!).  I’d love to post a thousand pictures of her but stopped doing that a while back so as not to invade her privacy (because I believe even 5-year-olds are entitled to some privacy and she hasn’t signed a model release form*).  Emma’s younger sister, Maddy, charmed us with her big blue eyes and magical smile.  I am certain I have the two most beautiful granddaughters in the world.

It was a good break.  It was a refreshing and recharging time-out after having completed May’s NaBloPoMo and then continued to post as if I had signed up for June’s version of it. 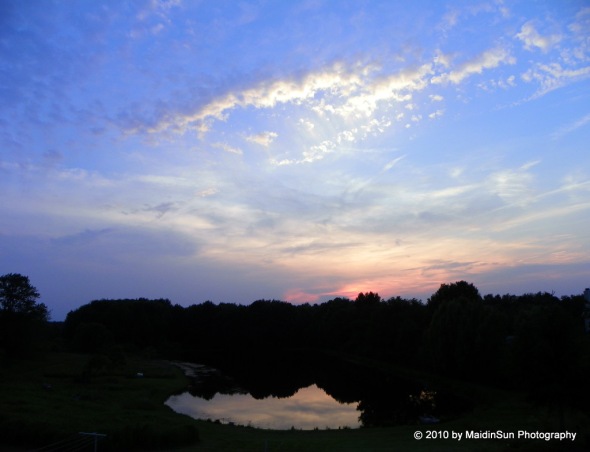 *Just to head you off (because I’m sure someone will offer advice or comments on this):  I know I do not need a model release form when posting for non-commercial purposes.  It was a small (okay, wee) joke.