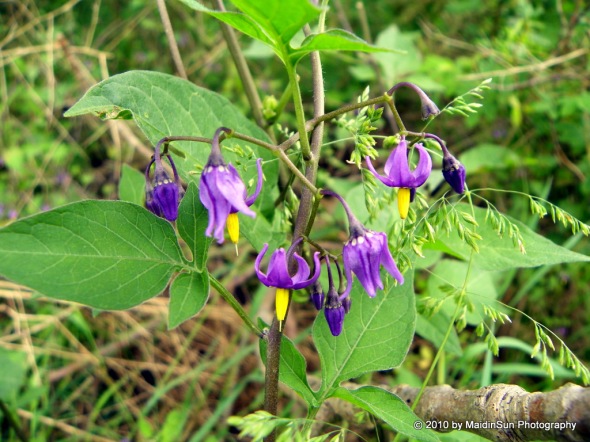 I took a stroll around the pond once the rain stopped yesterday.  I wanted to see what’s out there.  What’s blooming, what’s finished blooming, what’s fruiting, and by the way, what level is the creek at after all the rain?  That kind of walk.

I spotted the pretty little purple and yellow flowers pictured above.  They were climbing and twisting amongst the cattails on the western side of the pond.  Having no idea what the plant is, I broke out the field guide on wildflowers and looked them up.  They are climbing nightshade, also known by a host of other names including deadly nightshade and bittersweet nightshade.  The vine is a native of Europe and Asia.  It was introduced to North America and is now considered an invasive and expensive pest.  It will sometimes end up in crops, and loads of dried beans have been thrown away because a few berries from the climbing nightshade were found to be harvested with the beans.  Nightshades are not usually deadly, but the key word there is “usually.”  The berries can be especially harmful to children who are small and don’t need much to be bowled over by things they shouldn’t eat.  Reactions to the toxins in the plant and berries varies by  weight, size, health, and a particular sensitivity/allergy.

The name Bittersweet comes from the fact that portions of the plant taste bitter at first which is then followed by a sweet taste.  It has been used as an herbal remedy.  I’m not sure I’d take the chance even though there are only a few documented cases of death by nightshade.  Back in the day (olden days), the English used the plant to counteract witchcraft. 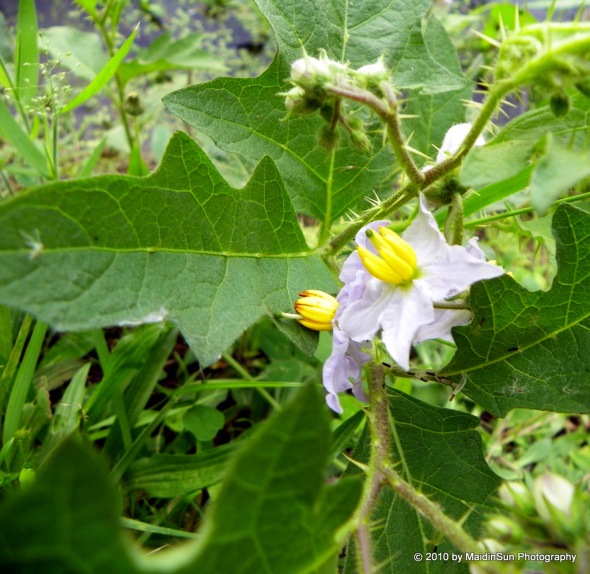 On the other side of the pond I found horsenettle, another member of the nightshade family.  The horsenettle is not a true nettle but it sure is prickly like one.  This plant also comes with warnings about its toxicity.  It is poisonous to human children — possibly to adults as well when you factor in size, age, general health, and sensitivity — and to animals, but lifestock generally avoid it.  Unlike the climbing nightshade, the horsenettle is a native species.  It’s also difficult to get rid of as it puts down very deep roots.  Hand-pulling can be painful because the spines penetrate the skin and break off when the plant is grasped.  Like many herbs and medicines that have some danger or toxicity to them (that would be most, I should think), the horsenettle does have a beneficial side to it and has been used as a sedative or antispasmodic.

The nightshade family also includes such edibles as the potato, the tomato,  and the eggplant (or aubergine).  Tobacco and petunias are also related. 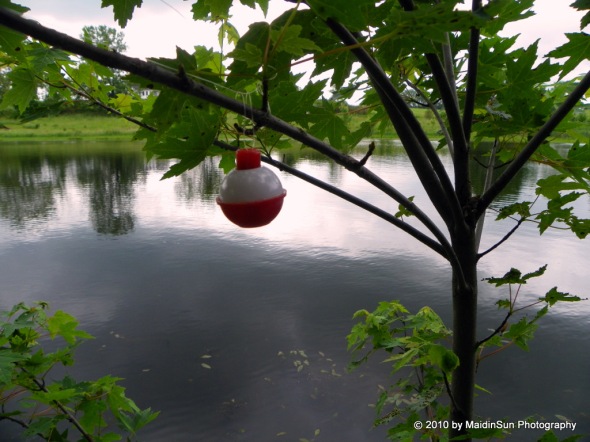 The fishingus bobis is not native to the acer saccharum (nor is fishingus bobis a real name).  One of the little fishermen who come round with their grandfathers to fish our pond must have gotten his fishing bob stuck in this little sugar maple  near the pond.  I think it makes a fine decoration for a small maple tree. 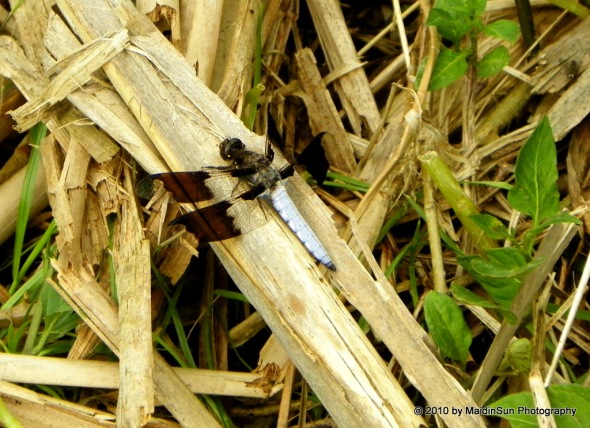 I’m not sure but I think the fellow pictured above is a common whitetail skimmer (libellula lydia).  It reminds me a bit of Uphilldowndale’s Big Beast.  This is the first time I’ve had any luck capturing one with the camera.  I actually managed to catch two: 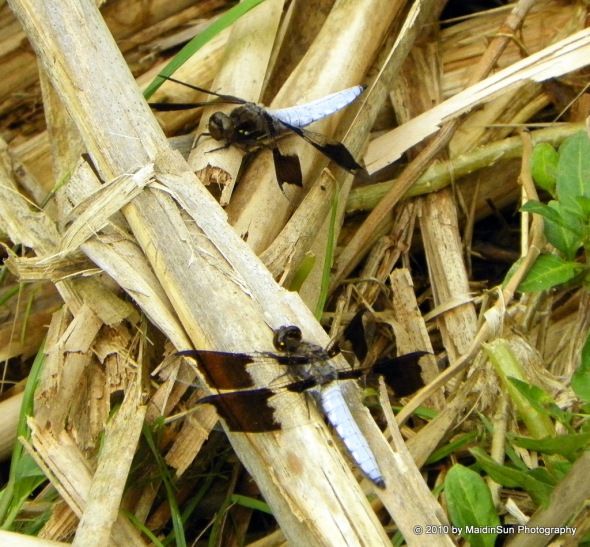 Which may mean I’ve used up all my luck when it comes to these big and fast flitting dragonflies.

The crabapple and apple trees all have small, hard fruit on them now.  The meadows and fields are dotted with buttercups and clover.  The timothy grass is creating waves of purple when the wind blows (something very difficult to capture with a still shot).  Some of the peonies survived the pounding of the rain, having been protected by the trees that surround them. 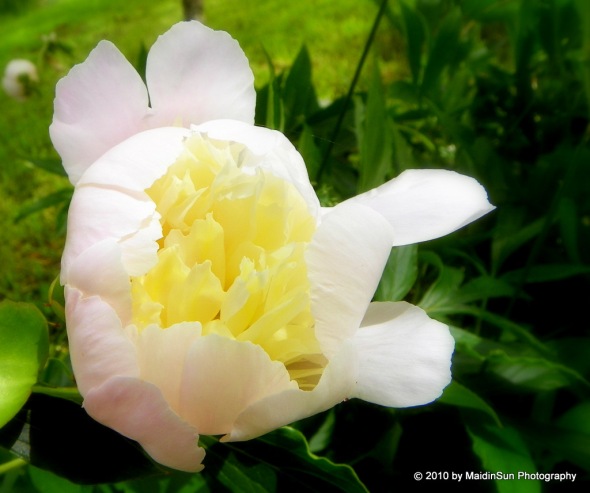 I also encountered a stalker in the grasslands out there: 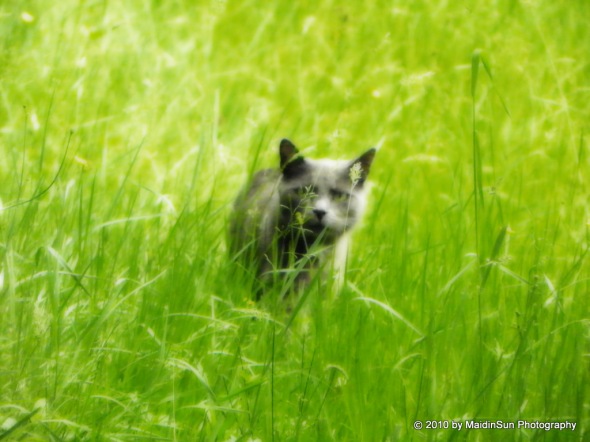 It’s one of the barn/feral cats that roams around the property.  I normally can’t get close enough to them for a photo.  This one was so busy stalking something that it didn’t notice me right away.  Click on the photo (or any of the photos for that matter) to see the larger version.  I particularly like this one with the cat. 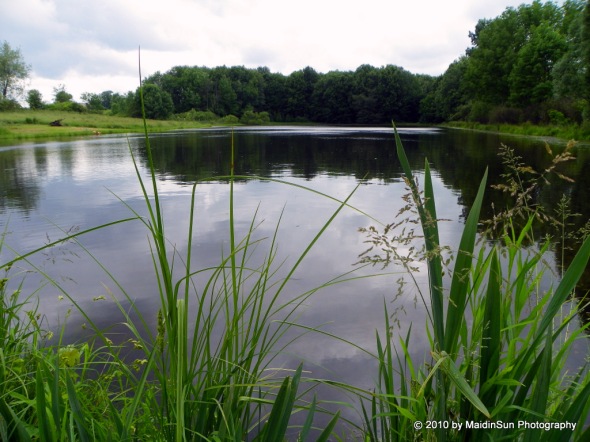 (A long and low view of the pond.)

Near the house, the tiger lillies are in full bloom: 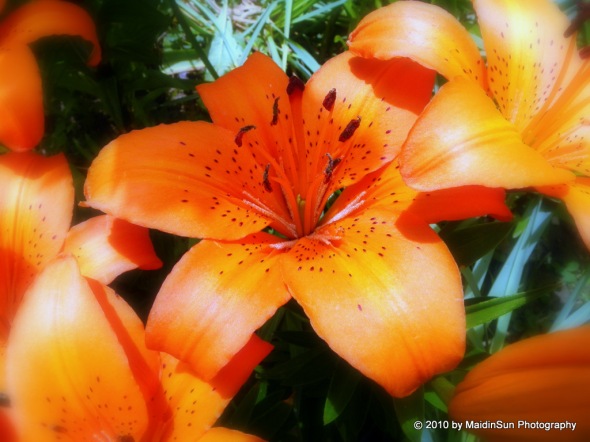 It was a good walk, all in all.  There is so much going on out there it is impossible to capture it all.  The place is, as they say, teeming with life.  It’s nice to see it all healthy and thriving. 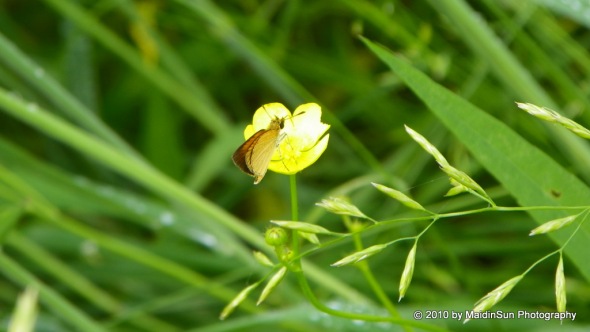 And if you take a closer look at the pond… 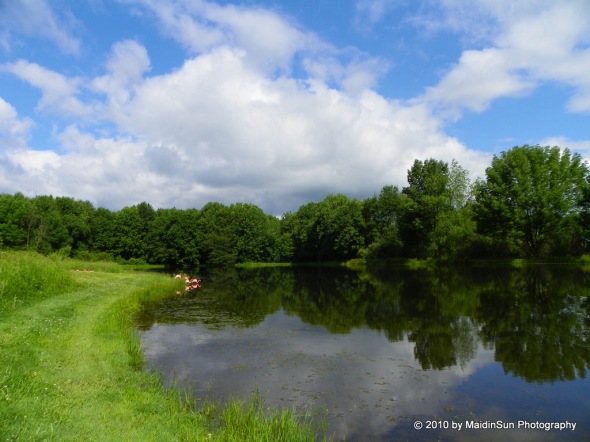 … you will notice that our flamingo flock is growing. 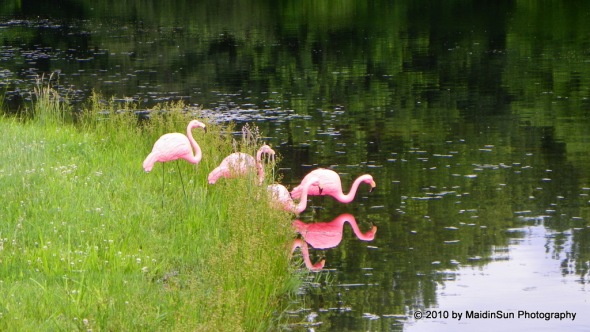 6 Comments on “Nightshade and nettle”