I took this photo during our trip to Colorado last August.  I think it’s Goat Rock but I’m not absolutely sure.  It’s somewhere on the Boulder Creek Path in Boulder.

I’ve been having a lot of fun (and a little challenge) with the Look Up theme.  I’m hoping June or July will bring a “Look Down” theme as it appears I do a lot of looking down when it comes to photographing what I see.  More so than looking up, it seems.

I have a bunch of new stuff to sort through.  M and I woke up early this morning and decided, on the spur of the moment, to head up to the Cleveland Botanical Garden and (while we were up that way) the Holden Aboretum.

The weather was if-y with a good possibility that we’d get rained on.  Otherwise we might have phoned some friends to see if they wanted to join us.  I was worried about taking pictures but it turned out to be a good thing.  I have some nice shots of an assortment of flowers with raindrops on them.  The wetness allowed for some interesting shots of the paths, too. 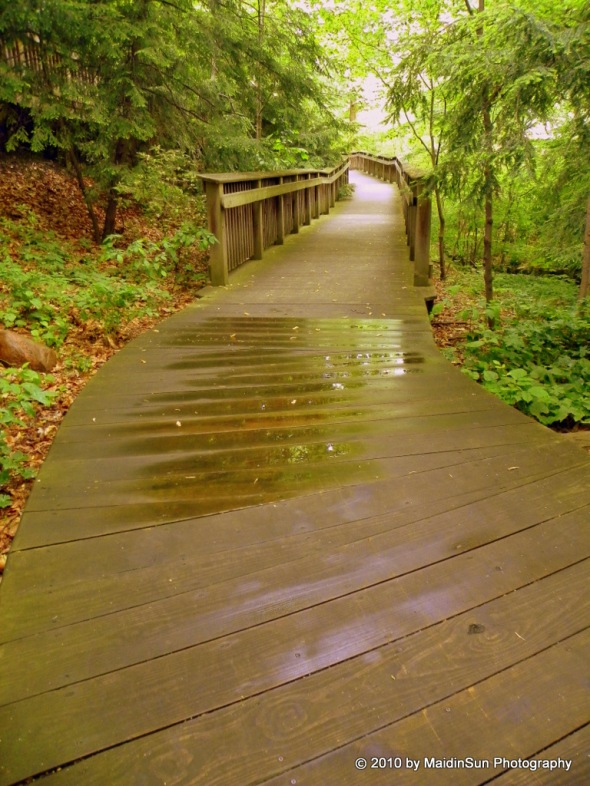 The rain came and went and came again while we were at the Garden but there were the occasional patches of blue sky which led us to believe we could fit in some time at the Holden Arboretum.  First we had to find lunch and that turned out to be more difficult than expected.  We drove around the city of Mentor and finally settled on a sub shop just because we didn’t want to waste any more time looking for a place to eat.  It was satisfactory.

After looking over the displays of rhododendron flowers inside the visitor’s center we headed outside to walk the trails to the rhododendron garden.  Alas, things (the weather) did not look good:

We checked with the folks at the information desk who helped by pulling up the latest radar for the area on the computer.  It was a no-go.  We’ll have to go back again sometime soon if we want to see the rhododendrons.  Or we can wait until other things are in bloom.