The Christmas centerpiece pictured above was given to us by our neighbors across the street.  Every year they make beautiful centerpieces and gift us with one of them, usually during the first week or so of December.  It was starting to die off and I made the comment at dinner the other night that we should probably get rid of the centerpiece.  M must have decided there’s no time like the present.  He picked it up and threw it out the patio door and into the snow.  Later he went out and moved it to the deck where it looks quite nice surrounded by all that white stuff.

Today I decided to try to get back into the swing of things, including a good workout.  I hit the elliptical for 52 minutes of fun and intervals.  It was a sweat fest, that’s for sure.  I will probably be able to accumulate mileage pretty rapidly on the elliptical.  I’ll have to work hard for it, though. 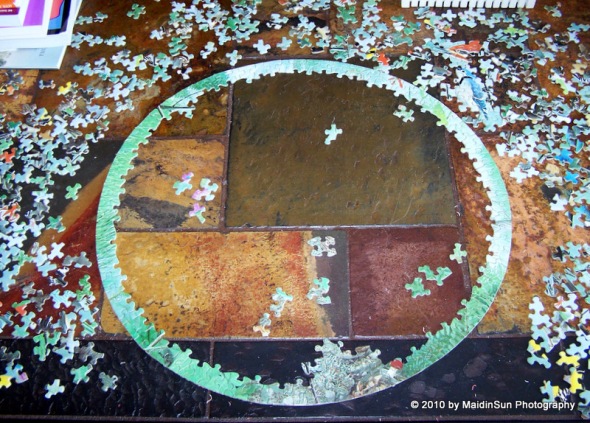 (One of many winter projects.)

It’s been a long time since I’ve worked on a jigsaw puzzle.  M broke out this one just before Christmas, thinking that the various family members moving in and out over the holidays might help us out with it.  No such luck.  We were left to do it on our own.  It’s situated in the living room so whenever I walk by, I take a glance or two in hopes of fitting in a piece or two.  At this rate, it should be finished by summer.

The cats have been enjoying the puzzle as well.  Whenever Bella sees me looking over the pieces, she jumps up on the table and sits smack in the middle of the puzzle, sometimes playing with the pieces.  I suspect some of those puzzle pieces are going to end up in Izzy’s secret hoard at some point.  I don’t know where her current treasure trove of toys and other small items from around the house is located.  I’m sure I’ll find it as I’m cleaning and decluttering the house.

With everything outside looking all white and gray, I’ve been looking indoors for some color.  Because I’ve just finished reading The Orchid Thief: A True Story of Beauty and Obsession (Ballantine Reader’s Circle)

I’ve been drawn back to the photos of orchids I took at Longwood Gardens back in 2007.  I’ll probably be posting a few over at Bountiful Healing as time goes on.

That’s about it from the Bogs for now.  I’m off to work on my decluttering project for the week.  If you don’t hear from me again, I’m lost in the accumulation of stuff, and I don’t mean the white stuff outside.