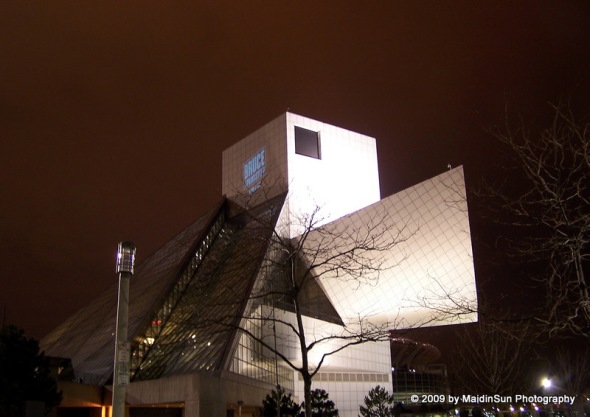 (Rock and Roll Hall of Fame, side view at night.  Cleveland, Ohio.)

At the risk of sounding redundant, and maybe (more than) a little lame, the Rock Hall rocked.  And I have to tell ya, I wasn’t expecting that.  I was prepared to suffer through it, enjoying the bits I wanted to see and dragging myself along for the rest.  I figured it was going to be guitars and costumes with more guitars and costumes.  It is that.  But it is also more than that.

You may be wondering what the bits were that I wanted to see.  They happened to be temporary exhibits which is why we finally got our butts up there to visit the Rock Hall:  the time limit.  The first was From Asbury Park to the Promised Land:  The Life and Music of Bruce Springsteen.  Those that know me well saw that one coming.  I mean, I’m from New Jersey!  I had to go see it.  It’s practically in my blood.

Bruce Springsteen was inducted into the Rock and Roll Hall of Fame in 1999 along with Billy Joel, Curtis Mayfield, Paul McCartney, Del Shannon, Dusty Springfield, and The Staple Singers.   (For those interested in how the induction process works, you can read about it here.)  The Springsteen exhibit will run through the spring of 2010.

It was an interesting exhibit, especially looking at the progression of bands The Boss moved through in his younger days as well as the progression of his music.  His handwriting, by the way, is about as atrocious as M’s.  Well, maybe not quite.  Springsteen’s is at least somewhat readable.  I can’t say the same for M’s.

A little randomness:  I was surprised to see a flannel shirt in the exhibit that is very similar to one I own (and still wear occasionally).  Springsteen wore it for one of his album covers (I can’t remember which one).  My shirt is not as frayed and worn as his is, though.  It’s a shirt I bought on sale many years ago because it looked warm and comfortable.  It’s a man’s shirt (because in those days there were not a lot of flannel shirts made and sold exclusively for women), with black and pink in the plaid pattern. 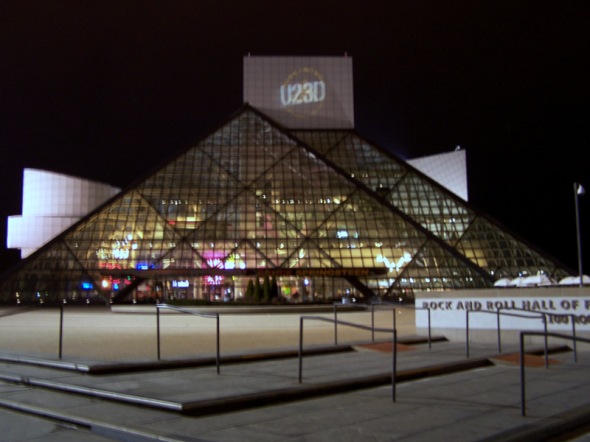 (This is an admittedly poor shot of the Rock Hall from the front but, hey, the wind was whipping too hard — over 25 mph — for a tripod to stand.  Even I was having trouble standing, and standing still was almost impossible.)

The second thing I wanted to see was U2 3D, a 3D movie (“the first-ever, live-action digital 3D film”) of U2 in concert in Buenos Aires, Argentina.  The movie will be at the Rock Hall through January 2, 2010.  That was the time limit that made it almost crucial that we go now and not put it off any longer.  Once the Christmas holidays get into full swing, we won’t have time to go.  U2, by the way, were inducted into the Hall of Fame in 2005.

It was an amazing experience in both sight and sound.  Having Bono up close and personal in 3-D format reinforced the star-crush I have on him.  It was almost as good as being in the audience.  Better, maybe, in that I could actually see the performers.  With the price of concerts these days (especially to see a band as big as U2), we usually end up in nose-bleed territory where the performers all appear to be very tiny little people in a land far, far away.  The sound is always good but there isn’t much to see from up there unless you have a good pair of binoculars.

The wind I mentioned earlier brought with it rain early in the day and a high of about 51 degrees which dropped pretty quickly throughout the afternoon.  Before leaving for the Rock Hall M and I had lunch at home because the insulation guys we hired were here to pump insulation into the attic (mentioned, I think, in a previous post) and they didn’t finish until after noon.  While eating lunch I looked out the window and there was a beautiful rainbow.  It was unusual in its placement to the south.  We don’t usually see them in that direction. 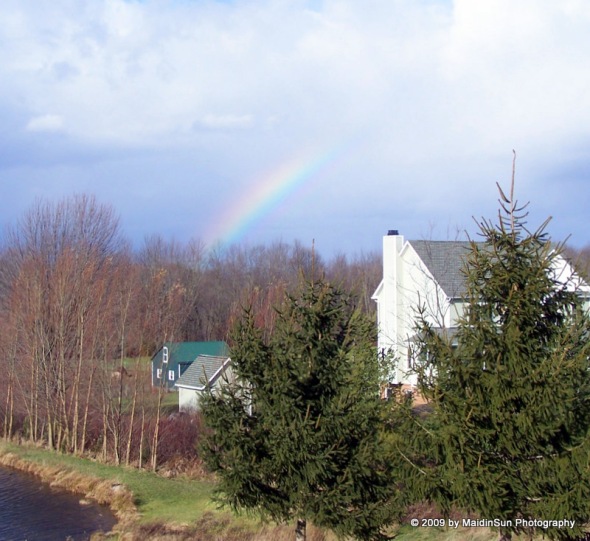 The rainbow, I suppose, was a little gift to us as compensation for the weather that was to follow.  The drop in temperature eventually resulted in snow and even stronger winds.  It was a noisy night here at Breezy Acres.  Having removed some bushes near our bedroom window during our backhoe escapades earlier this year, the wind no longer whistles as much but stays in the lower register of moans, groans, howls, and creaks with the occasional banshee-type scream.

Today Lake Erie is doing its thing and we have been getting some lake-effect snow.  The winds keep it from accumulating in an even fashion.  There are drifts here and there, and some slick spots on the road from where the snow likes to gather.  It might be time to put up the snow fences. 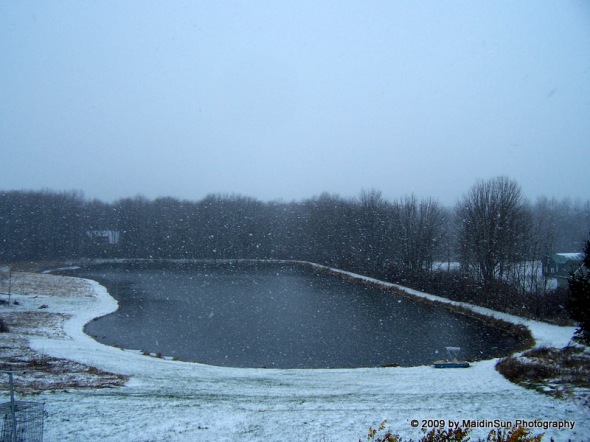 There had been some freezing of the pond but yesterday’s warm-up and the gusty winds that came with the cold are keeping it from freezing again.  Once the wind settles down, I expect we’ll see ice forming again.