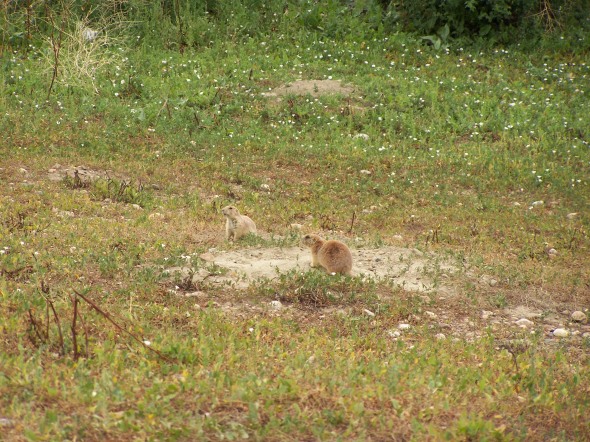 (More prairie dogs because they are too cute to resist.)

We decided before coming out here that we would make due without a car.  We can always call M the Younger for a ride if we’re in need of gas-powered transportation and Boulder has such a fab network of cycling and walking trails that a car didn’t seem right for experiencing Boulder.

M and I were up fairly early (our bodies and minds are still on eastern time).  After some early morning yoga, we went for a walk on one of the many trails that wind around Boulder. 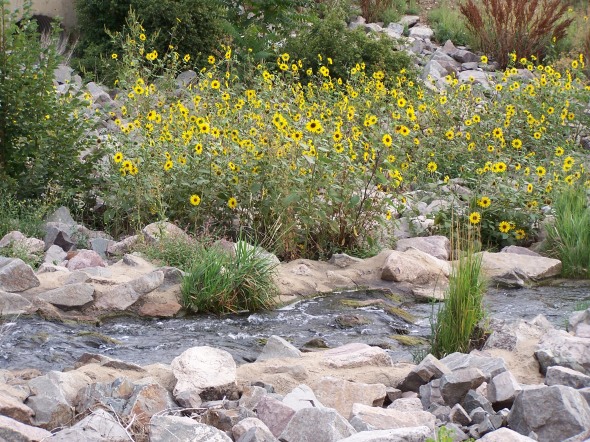 One of the things I first noticed on the ride from the airport in Denver to Boulder are the sunflowers.  Like the prairie dogs, they’re everywhere.  It’s possible that sunflowers pop up in the wild back home in the Bogs but mostly, they are planted by someone.  Out here they are wild, growing in places where I’m pretty sure no one planted them.  Sunflowers are a good dry-land plant and are native to the high plains. 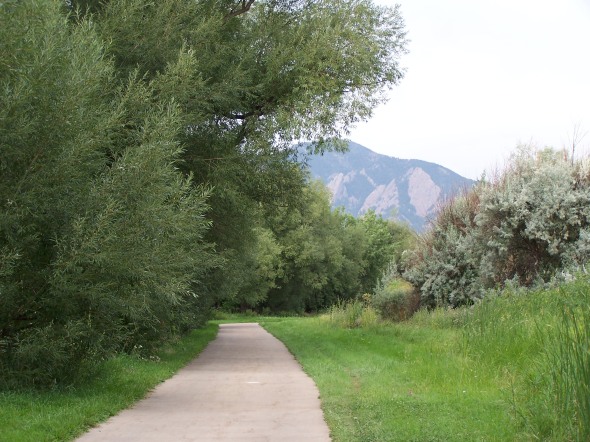 After our walk we came back to the hotel and went for a swim.  It was very refreshing.  While the heat hadn’t quite moved in yet, it was beginning to warm up.  Then it was time to head over to the bike rental shop and pick up the bicycle we had reserved.  Yes, that does read bicycle as in one.  We decided to give a tandem bike a try.

Our first ride together consisted of making our way around the parking lot.  Once we got that down, we pedaled over to the Boulder Creek bike trail and headed back to our hotel (about 2 miles from the bike shop).  The thinking was that if we couldn’t get the hang of it by the time we got back to the hotel, we could give up, take the tandem bike back, and try singles.

We made it back to the hotel with our minds, bodies, and marriage still intact.  As I tweeted earlier today, riding a tandem bike is a good test of marriage and communication skills.  There were a few kinks in the communications skills but we eventually worked that out so that riding in tandem became easier as we learned. 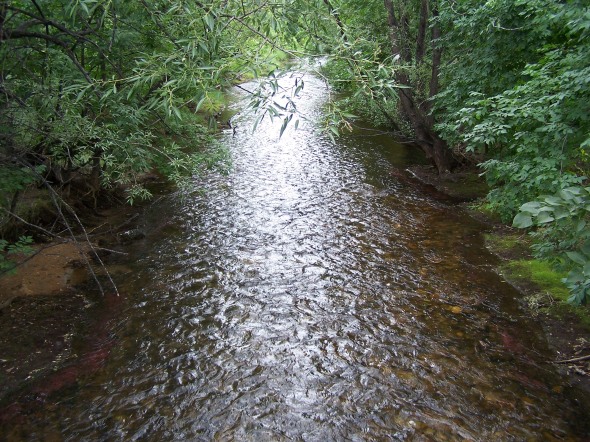 (I’m not sure which creek this is but I’m guessing Boulder Creek.)

Having survived the test trip, we headed back out to explore a little of Boulder and learn our way around on the bike paths and streets (most of which provide a bike lane).  We eventually ended up over in the Pearl Street area where there are lots of shops and restaurants. 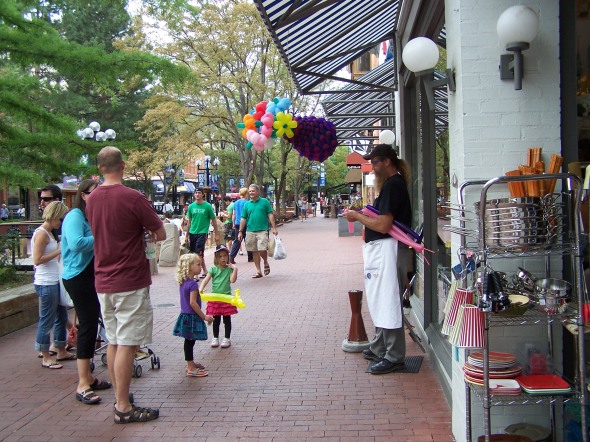 (A balloon man at the Pearl Street Mall.)

We had lunch at the Falafel King Restaurant (located on Pearl Street).  There was a small line out the door when we arrived but the service (quasi-cafeteria style) was quick.  The food was fresh and excellent.  We sampled the gyros, the falafels, and the Greek salad.  The pomegranate lemonade was refreshing, not too sweet and with just the right amount of tartness.

We shopped a little and then hopped back on the bike to visit the Redstone Meadery which is located near where we’re staying.  We saved that for last in case the mead tasting went right to our heads.  I’ve been having a hard time adjusting to the altitude (nausea, dizziness, and really bad headaches) so I wasn’t sure I should be tasting mead or any alcohol at all at this point, but decided to go for it.  You only live once.

We sampled several meads, all of which were delicious.  My favorite was the Nectar of the Hops, a dry-hopped, carbonated mead.  The samples were small enough that we were able to walk out under our own steam.  M and I were both getting pretty tired (and saddle sore, so to speak, having not been on a bike in many years) so we walked the bike back to the hotel.  Besides, we bought two bottles of mead and they wouldn’t fit in my daypack.  It’s hard to ride a tandem bike and carry a bag with two bottles of mead in it, especially if you want the mead to survive the trip.

We went for another swim in the hotel pool and now we’re taking a much-needed break.  It’s warmed up considerably and an afternoon siesta is always nice, whatever the circumstances.

We’ll be having dinner with the newlyweds tonight and then we’re going to give them lessons in preserving the fruits and veggies of summer.  (In other words, we’ll be canning peaches and tomatoes tonight.)  If we’re feeling up to it after that, we’re thinking of checking out these guys who are performing at the Boulder International Fringe Festival which started yesterday.