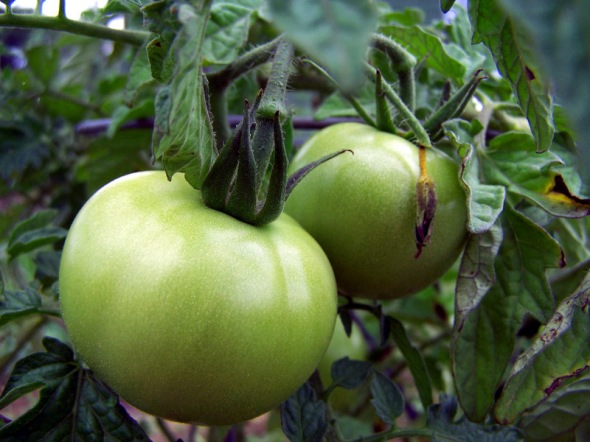 I was at Hilgert’s Farm Market buying some fresh veggies when one of the women who works in the market asked if there was anyone who knew how to make fried green tomatoes.  I told her I did and she directed me towards another customer, a young woman, who was asking how to make them.

I know there are various ways of making fried green tomatoes, from the very simple to the gourmet.  There seem to be regional differences as well.  Some are made with breadcrumbs, some are made with cornmeal, and the southern variety are usually fried with some bacon grease to give them the extra flavor.  Some folks, before dredging the slices, dip their tomatoes in beaten egg, some in buttermilk, and some dredge them “dry.”

I gave the young woman my mother’s recipe which is one of the simplest ways I know how to make fried green tomatoes.  It’s also my favorite.  I don’t make them often because they can be a mess to make due to all that hot oil spattering around.

Mom’s fried tomatoes were not always fried green tomatoes.  She frequently made them with not-quite-ripe red tomatoes.  From my own experience I’ve found those work better with Mom’s recipe since a little juice on the tomato slices helps the coating to stick.  The tomatoes are sliced about a quarter inch thick, coated in flour, salt and pepper, and then fried in about a 1/4 inch of  hot oil in a skillet until they are golden brown (or as brown as you like them).  Flipping the slices in the hot oil is the messy part (for me).  Once they’re browned, the fried tomatoes are placed on a paper towel to sop up some of the oil then served hot/warm with parmesan cheese sprinkled on top.

Simple, delicious, and they always remind me of summer and the wonderful flavor of fresh tomatoes (especially Jersey tomatoes!).

If you’re interested in the history of fried green tomatoes, I found this blog post to be helpful.