It’s worse than I thought… 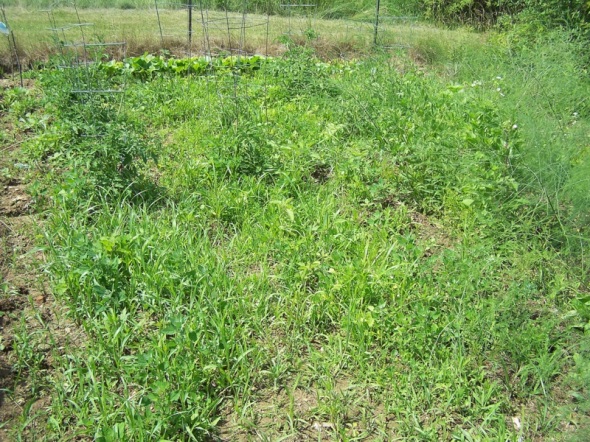 This part isn’t quite so bad:

Bok choy, for those inquiring minds that want to know, is also known as the “white cabbage.”  The stalk resembles stringless celery and the top is similar to romaine lettuce in appearance.   I was reading somewhere that in Hong Kong markets there are over 20 varieties of bok choy available.  I’m not sure which variety I’m growing (I’ll have to find the seed packet), but it’s very tender and tasty.

I spent a couple of hours in the garden, cleaning up the asparagus bed (barely visible in the first shot as the ferny fronds are blending in nicely with all the weed-greenery).  I wish I’d brought the camera along on the second trip out there (after lunch) so I could show you the progress I’ve made.  It’s going to take several days to get this mess cleaned up.  Anyone want to volunteer to come over and help??

I also picked enough of the lettuces and thinned out enough of the bok choy to feed a small army.  M and I had salad for lunch.  We’ll be having salad with dinner, along with some steamed bok choy.  There’s nothing like eating vegetables you’ve earned by growing them for yourself.

The best way to make your dreams come true is to wake up.

I’m having a little trouble getting started this morning.  “Keeping going” might be more accurate.  I rolled out of bed prepared to exercise like the exercising madwoman I’ve become only to find myself spending a good 30-40 minutes cleaning up after the cats.

Don’t ask.  You don’t want to know.  Suffice it to say that Izzy and Bella are lucky I didn’t take them out and throw them both in the pond.  Since I don’t know which cat made the mess, they should both suffer for it.  Seems fair enough to me.

It’s officially summer now.  I saw a few fireflies lighting up in the wildflower meadow last night.  (Funny visual with that — picturing fireflies with cigarettes and matches, “lighting up.”)  When we lived in southern Ohio the fireflies peaked sometime around the summer solstice, millions of them flashing on and off along the riverbank.  Here they peak later in the season.  It takes a little longer to warm up in the Bogs.  I’m not in any hurry for it (the warm-up).  I’ve been enjoying the cooler-than-normal June.

The newlyweds are back from their honeymoon.  We talked with M the Younger last night.  They enjoyed Jamaica, but were getting a little bored towards the end.  They went to one of those all-inclusive resort type places where they were pretty much walled in on resort grounds for the week where they lounged on the beach, sipped on rum drinks, and went snorkling occasionally.

Sounds good to me.

The buzzer on the washer just sounded.  The first load of laundry is finished.  Time for me to get it out on the line to dry and then it’s off to the garden.  I’ve been afraid to look at what’s happening up there.  I’m pretty sure the weeds have taken over by now and finding the vegetables will be a little like looking for needles in a haystack.